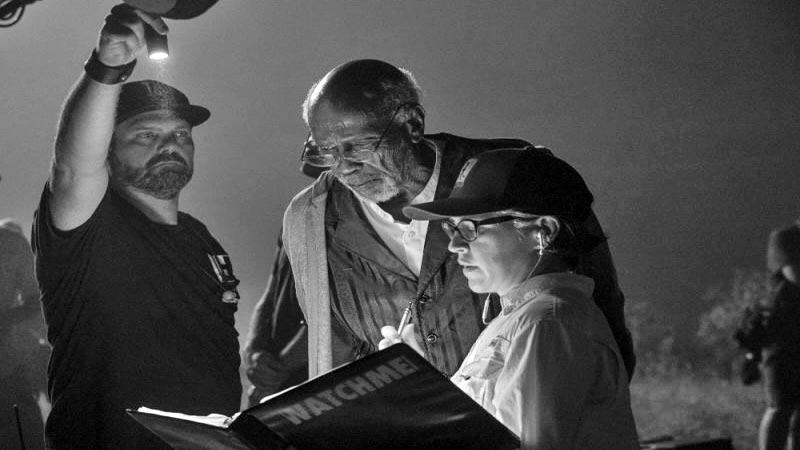 HBO’s “Watchmen” made its intentions clear when it started its first episode with a depiction of the 1921 Tulsa Massacre. The superhero series is a new version of the 1986 alt-history graphic novel, and it isn’t shy about taking on race.

And not everyone’s happy about that.

The series, created by Damon Lindelof (“Lost,” “The Leftovers”), has received effusive praise from many fans and critics, though a number of outlets have reported that there’s a contingent of people seemingly review bombing the show, unhappy with its politics. On Rotten Tomatoes, the critics’ score for the show is in the 90s, while the audience score is in the low 40s.

Criticism of the show is understandable, given that it is an unequivocally new take on the source material. With so many mysteries going on, from squid falling out of the sky to whatever is happening with Jeremy Irons’ Adrian Veidt, even the most avid consumers of Peteypedia, the show’s supplemental material, might be confused. However, with the Cold War being such an integral plot point in the 1986 comics, criticizing “Watchmen” for being political is like criticizing Silver Lube Man for being lubey.

In an interview with HuffPost, Nicole Kassell, the executive producer and a director of the show, addressed the criticism, explaining why the show is so relevant now and how there was never any question of whether “Watchmen” would tackle race head on.

Nicole, through these first episodes, I’ve been confused. But I’m OK with it! What reactions were you expecting?

I don’t know what I was expecting, but that’s entirely what I’m receiving. I appreciate you saying you’re OK with it. Other people are very frustrated by it, but I just encourage people to hang in there. The answers are coming. I wasn’t confused because I was so embedded in the story as a whole; that was not my reaction when I read the script or watched it. But I understand.

What was the balance of making this a new story, but also filling in the backstory from the comic?

That’s the mastery of the writing. I credit Damon and his writing team with that. It was definitely tricky. Damon had the first tier of readers: me and the production team and HBO. So he had these sounding boards that were very good at saying, “We’re confused,” and he had to really tread that line of the level of confusion that people can tolerate, because confusion is kind of mystery also, and mystery is very important and suspense, and it is nine hours. It’s not a feature, right? So you need to have people wanting to come back.

I think as a director, working with the writer, with Damon and whoever the co-writer of the script was, it was just being really honest about my questions. And we would debate what needed to be a little more clarified here or was it fine to know the answer was coming in Episode 5 or 6 or 9?

How do you feel about the reaction right now to it?

I’m really, really thrilled. It’s been everything we hoped for, for sure. With each week as Sunday approaches, that kind of anticipation and anxiety builds because with every episode, you’re making yourself vulnerable to reaction again. So Monday morning, I’m relieved to wake up to the positive feedback. Each episode is its own little artistic unit, and kind of the accumulation of the episodes brings expectations and needs. The stakes are high. But it’s been so exciting to have really countless people say, “I’ve rewatched the pilot three times now,” or “I can’t wait for the next episode.”

Speaking about the reactions, they have seemed overwhelmingly positive, but there is a group of people who attack the show for being too political. Were you and Damon Lindelof sort of anticipating that?

In terms of anticipating, I’d say there was definitely, for sure, the anxiety of taking on race head on and what the reaction may be to that, but whether or not to do that was not ever a question for me. Whatever I do as a filmmaker, it’s very important for me to create something that leaves you with something to talk about and think about. And the fact that this was taking on an issue that is current and alive right now was honestly a relief to me of how I can contribute to the conversation and navigate the storm inside of me that has come up since the election and since Charlottesville.

It didn’t make it not scary to do, and we talked about it a lot. But the question of whether or not to do it wasn’t an option to me. I was thrilled that Damon was taking this on, and that he was using his platform to take it on. He’s got a big microphone, and I forget who to attribute the quote to, but it is that thing that if you see something and don’t say something, you are contributing to the problem. I felt that it was actually a really important and responsible thing to do.

For me, it does seem like the sincere reactions are mainly positive, because “Watchmen” was always a political story.

I have a very close friend who called me the other day who’s a “Watchmen” diehard fan, and he’s kind of the toughest audience. So he called to say, “Are you OK?” Because there are people out there and saying crap or what not, and he said, “They’re just being lazy. They’re not doing the reading.” Not to criticize anyone, but what we were seriously protective of — and again, I really give Damon this credit — it was always essential to be true to the spirit of the comic. It is an extremely political piece of literature, and Damon’s inception for this was like, “If I’m going to do this, what is the equivalent of the Cold War now?” And it is race in this country. We even had debates. There were times where I felt maybe it was getting too cynical or dark, the material we’re doing, and he had to remind me that’s the tone and that’s the source, and he has to be true to that.

You have President Donald Trump tweeting about how the impeachment is a “lynching.” What’s it like when that’s happening and then you have a show that’s actually showing the horrors of historical terror regarding race?

It’s pretty eerie. Things were already in the show before the event happened. And I’m thinking ahead, there’s an episode coming up that, when the real world event happened last spring, we were all just gobsmacked. I think this happens a lot in storytelling that the zeitgeist is kind of out there in the culture. It’s both eerie and then also affirming that we had our finger on the pulse.

What made the Tulsa Massacre the starting point for the show?

I’m speaking for Damon, to kind of summarize how he decided to take this on. He had been asked by Warner Brothers three times, “Will you do ‘Watchmen’? Will you do it?” And the third time he said yes because he had read Ta-Nehisi Coates’ book, “Between the World and Me,” and also his essay, “The Case for Reparations,” in The Atlantic. And when he read that, he learned about the Massacre of 1921, and this place called Black Wall Street in Tulsa. He hadn’t known about it and I didn’t know about it until I read Damon’s script.

When he realized that if he was going to do “Watchmen,” that this was the topic that would be the political crisis within the story, that was the inciting incident because it sets up all of the themes. I think, to me, the fact that the story opens with a little boy looking at the screen and saying, “There will be no mob justice today. Trust in the law.” And then we’ll see him exit into a world, not only into 1921 but into 1938. And over and over into a world where he cannot trust in the law. And we live in the country right now, real America, where a huge part of the population cannot trust in the law. And that’s at the heart of what Damon wanted to talk about in doing this.