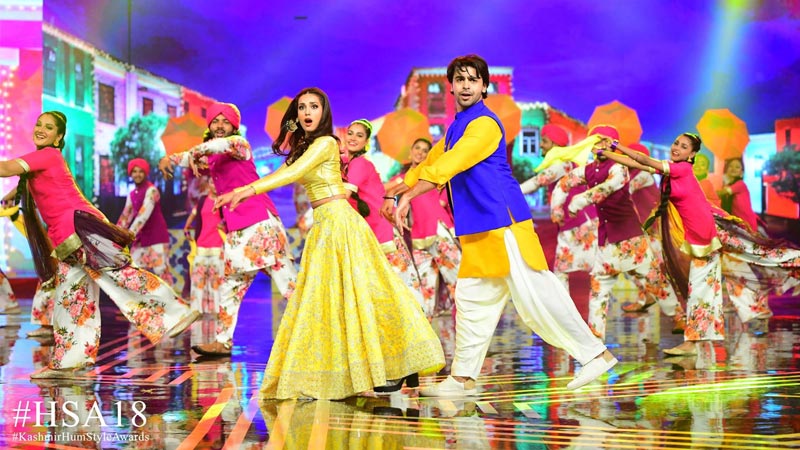 HSA being the biggest night of fashion with a focus on style and entertainment that aims to not only showcase the industry in the best light possible, but also to reward excellence.

In three short years, Hum Network has established HSAs as a credible award platform that is both highly coveted and appreciated for their sincerity and focus on quality. This 4th edition aims to be no different by continuing to be a glamorously elegant affair filled with charm, energy, and entertainment.

What further sets HSAs apart as a platform amongst a plethora is its relentless focus on showcasing and rewarding deserving individuals from fashion and entertainment, in its entirety. Regardless of them being multifaceted businesses or individual excellence, be it personal style or creative expression in terms of design.

Hum TV’s President Sultana Siddiqui, who is the beacon behind the TV Network’s consistent efforts to redefine and re-articulate the entertainment propositions, said the following with regards to raising the bar for the whole industry by supporting the individuals and brands that make it happen:

In three short years, Hum Network has established HSAs as a credible award platform that is both highly coveted and appreciated for their sincerity and focus on quality

“The idea behind these awards primarily is to showcase, acknowledge and reward the most deserving candidates of the entertainment and fashion industry. And we as a network are the sole and proud pioneers of establishing a platform as a credible as HSA, while not neglecting the entertainment needs of our audience. This year with our fourth edition of HSA we aim to continue with our efforts to maintain complete transparency and fairness, with regards to the whole selection criteria and the voting mechanism. Also, ensuring the individuality of HSA’s prestigious jury, because at Hum Network we believe that credibility is the only way to thrive and grow.”

This year awards shall be given out in 19 distinct Categories,

Hair & Makeup Artist Of The Year

Fashion Photographer Of The Year

Retail Label Of The Year – Apparel

Designer Of The Year – Lawn

Designer Of The Year – Pret Wear

Designer Of The Year – Demi-Couture

Designer Of The Year – Menswear

Designer Of The Year – Bridal

HSA’s 4th edition is considering portfolio’s from June, 2018 – May, 2019 for this year. Brands/Individuals who still need to submit their portfolios, can contact Hum Style Awards at humstyleawards19@gmail.com and deadline is December 20th, 2019.

Besides celebrating great artistry and excellence in Entertainment and Fashion, HSA will feature some great dance and singing performances. The Press and PR for the event itself shall be handled by Take II PR.

Hum Network Limited was launched on January 17, 2005, with its flagship channel, Hum TV. In a short span of 11 years, HNL has become the number one general entertainment network of Pakistan by creating a niche for itself with its stellar productions and for highlighting social issues and educating the masses. HNL plays are bagging awards for best television plays consecutively since its inception and its popularity has gone beyond borders and is being watched all over the world including the United Kingdom, Middle East, North Africa, North America, Canada, Australia and New Zealand. HNL also boasts the first 24-hour food channel in South Asia, Hum Masala, the ever popular Style 360 – the most sought after platform for fashion and lifestyle and Hum Sitaray, a rapidly growing family-based entertainment channel catering to multiple genres of drama serials, soaps, sitcoms, fashion shows, game shows and much more. Other than the channels, HNL also boasts its own publications including the highest circulated culinary magazine Masala TV Food Mag. HNL is Pakistan’s only publicly listed entertainment network on Pakistan Stock Exchange.