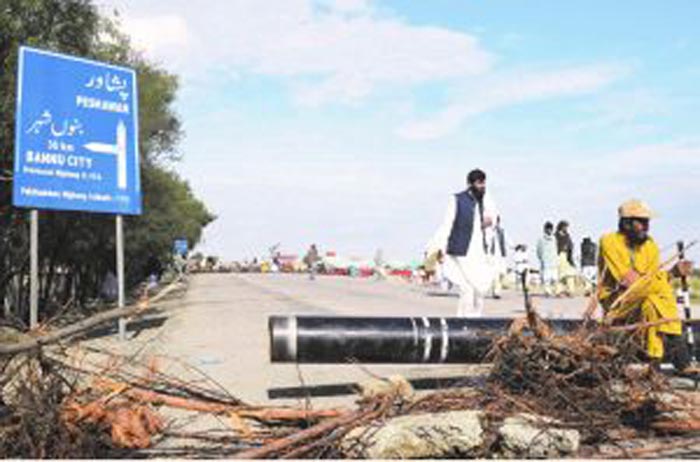 Thousands of Jamiat Ulema-i-Islam-Fazl (JUI-F) protesters continued to block highways across Pakistan for a third consecutive day on Saturday as part of the party’s ‘Plan B’, a private TV channel reported. The Hub River Road, which connects Karachi to Balochistan, has been closed for heavy traffic. Police said traffic is being diverted to Northern Bypass from Hub Toll Plaza. Similarly, JUI-F and Pakhtunkhwa Milli Awami Party workers also staged a sit-in on Dera Ismail Khan National Highway in Balochistan’s Zhob District, suspending all vehicular traffic.

The JUI-F has staged a sit-in on Nowshera GT Road in Hakimabad. Traffic has been diverted on alternative routes following the blockage.

The sit-in has cut off contact between Khyber Pakhtunkhwa and Balochistan, where passenger buses and cargo trucks have been stuck in large numbers. The JUI-F workers have also been protesting on the GT Road after pitching tents in Malakand district of Khyber Paktunkhwa. Protests and road blockades are also continuing in other parts of the country. The protests, led by Maulana Fazlur Rehman, began with the ‘Azadi March’ on October 27 from Karachi. Thousands of supporters reached Islamabad on October 31, holding a two-week sit-in in the city.