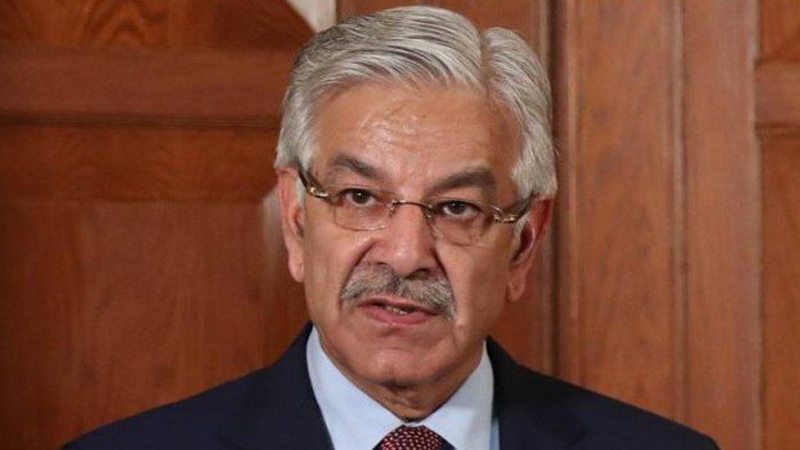 The tug of war between government and the opposition parties intensified on Friday as the latter presented a no-confidence motion against National Assembly Deputy Speaker Qasim Suri.

Pakistan Muslim League-Nawaz (PML-N) leader Khawaja Asif on Friday announced the plan to bring the no-confidence motion during the National Assembly session. Later, the motion against the deputy speaker was submitted in the National Assembly Secretariat with signatures of more than 100 opposition MNAs.

Speaking on the floor of the Lower House, Khawaja Asif said, “Have patience, elections will take place on our demand soon.” He criticised the incumbent government for making a mockery of legislation in Thursday’s session and regretted that their microphones were muted during the speeches. Turning his cannons towards the deputy speaker, Khawaja Asif said stay orders have suddenly become ‘halal’ for those who would criticise those in the past. He claimed that Qasim Suri passed 11 ordinances in no time by neglecting the rules of the procedure, adding that they will knock the doors of the Supreme Court if denied delivery of justice. The no-confidence motion against Deputy Speaker Qasim Suri was presented under Rule 12 (removal of the speaker or the deputy speaker) of the Rules and Procedure and Conduct of Business, 2007 and Article 53(7)(c) of the Constitution. The motion was moved by PML-N leaders Khawaja Asif, Khurram Dastagir, Mohsin Nawaz Ranjha, Murtaza Javed Abbasi, and Muhammad Sajjad. The resolution said that Qasim Suri has violated the rules of procedure and conduct of business and hence has lost the confidence of majority of the legislators.

According to Article 53(7)(c) of the constitution, “The office of Speaker or Deputy Speaker shall become vacant if he is removed from office by a resolution of the Assembly, of which not less than seven days’ notice has been given and which is passed by the votes of the majority of the total membership of the Assembly.”

Khawaja Asif said if the government continues with this practice, it will destroy democracy. He said the opposition will be forced to move the Supreme Court (SC) if government does not refrain from disrespecting the constitution. He said that the government representatives don’t know such things which the opposition parties know. Kh Asif urged National Assembly Speaker Asad Qaiser to become an advocate for democracy and the supremacy of the House instead of one party. He also demanded the PTI to account for the funds it allegedly received from other countries.

Speaking on the occasion, Defence Minister Pervez Khattak accused the opposition of not obeying the law. “They (opposition parties) talk about democracy [but] they are not even ready to listen,” he said, adding that opposition parties should convince Jamiat Ulema-i-Islam-Fazl chief Maulana Fazlur Rehman to come to the table in order to resolve his grievances. He asked opposition members to exercise restraint and build courage to listen to speeches of the government members. The constitution of Pakistan allows the government to promulgate ordinances, he maintained.

Earlier, a war of words between the treasury and the opposition benches continued in the National Assembly, especially when Pervez Khattak took the floor to start his speech.

Minister for Kashmir Affairs and Gilgit-Baltistan Ali Amin Gandapur said he was ready to vacate his seat to contest by-election against JUI-F chief Maulana Fazlur Rehman. He also urged Fazl to end his sit-in.

In response, JUI-F leader Assad Mahmood said he is ready to tender his resignation if Ali Amin Gandapur quits.

Communication Minister Murad Saeed said how strange it is that the opposition is criticizing the government. He said Khawaja Asif was serving in UAE on iqama and at the same time he was foreign minister of the country. He said it was Khawaja Asif who declared Prime Minister Imran Khan as Islamist to appease Americans and portray PML-N government as liberal and enlightened.

The minister said entire Muslims and the people of Pakistan are proud of Prime Minister Imran Khan for highlighting true face of Islam at the world fora and telling the international community that Islam is the religion of peace and has nothing to do with terrorism.

In his remarks, Asad Qaiser said Muslims cannot change even a single word regarding finality of the Prophethood at any cost.

Earlier, PPP leader Raja Pervaiz Ashraf criticized the government over Nov 8 legislation by deputy speaker without listening to the opposition voices. “If you will not allow us on legislation, then what the entire opposition do in the parliament,” he questioned, and claimed that it is a matter of attitude of the ruling party. The House was later adjourned to meet again on Monday at 4 pm.