Fazl pins hope on state institutions for support against government 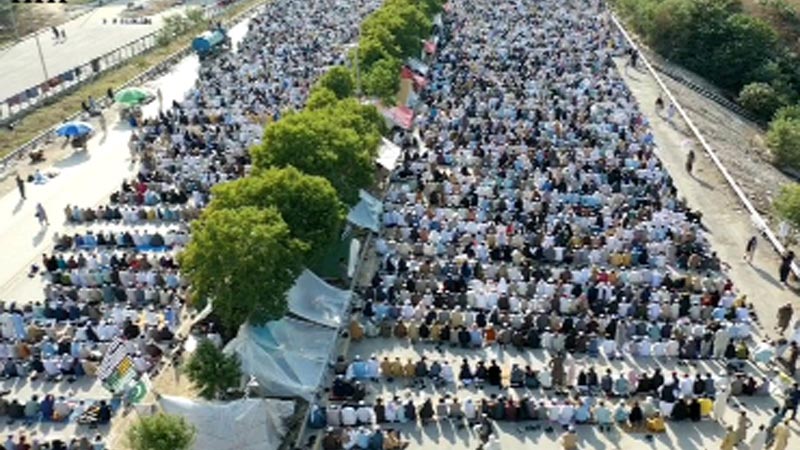 Jamiat Ulema-e-Islam-Fazl (JUI-F) chief Maulana Fazlur Rehman on Friday said he did not accept the ‘fake’ parliament, let alone legislation passed through it.

“No legislation has taken place since formation of this parliament… their president promulgates 10 to 15 ordinances in one go and then these ordinances are hurried through the House,” he said.

“Let me assure you one thing, resolutions of a fake assembly like this and its legislations have no legal value. These are forced laws and the nation would never accept executive orders of the controversial prime minister.”

Conveying the message of ‘unity’ and ‘harmony’ to all state institutions, Maulana Fazl, in his address to the protesters said they were expected to support all opposition parties in uprooting this “incompetent and illegitimate government”.

He thanked and lauded PkMAP chief Mehmood Khan Achakzai for accompanying him on the container.

Commenting on the ongoing negotiations with the government, he said, “We have conveyed the message to the government’s team to visit us when you have [PM Imran Khan’s] resignation with you”.

He said that remarks made by head of the government negotiation committee, Pervez Khattak, in parliament reflected that the government was unwilling to negotiate.

“His tone during his speech in parliament has corroborated our view that they are against reaching an understanding […] their conversation reflects conflict rather than reconciliation.”

“The representatives of current government are stone-hearted people who are mistreating political leadership,” he said, adding that the old-aged politicians were still demonstrating resilience. Fazl also vowed to continue Azadi March and sit-in in Islamabad until Prime Minister Imran Khan’s resignation.

He lauded the sacrifices of armed forces for restoring peace in the country. “But, without our efforts and sacrifices you wouldn’t have achieved these successes,” he said.

“We didn’t give these sacrifices so that these evil rulers are imposed on us… If we can’t allow people to raise arms against Pakistan in the name of Islam then we also can’t allow Imran Khan to come into power through rigging,” the JUI-F chief said.

Giving message of unity and harmony to all state institutions, bureaucracy and the security establishment, he invited all to play their role in uprooting the “incompetent and illegitimate government”.

Meanwhile, Pakistan Muslim League Quaid (PML-Q) top leader Chaudhry Pervaiz Elahi called on Prime Minister Imran Khan on Friday. Sources said that Pervaiz Elahi met the premier at the PM’s House. The PML-Q top leader, who is acting as a mediator between the federal government and opposition parties, apprised the details of his meetings with Fazlur Rehman.

Elahi had held several meetings with the Maulana Fazlur Rehman to end deadlock between the Pakistan Tehreek-e-Insaf (PTI)-led government and the opposition parties leading a protest in Islamabad, Azadi March.

On the other hand, sources said that the federal government rejected the demand of the opposition parties for re-election and the resignation of the premier.

Earlier, after meeting the JUI-F chief, Pervaiz Elahi told media that they are hopeful for a breakthrough as ‘things are going towards betterment’. He said, “I have given him suggestions and we are hopeful for a solution. We will give good news soon.” A journalist questioned Elahi whether the Maulana Fazlur Rehman has stepped back from his demand for the PM’s resignation. To this, Elahi replied that ‘he will give good news soon.’