Will neither quit nor give NRO to the corrupt: PM 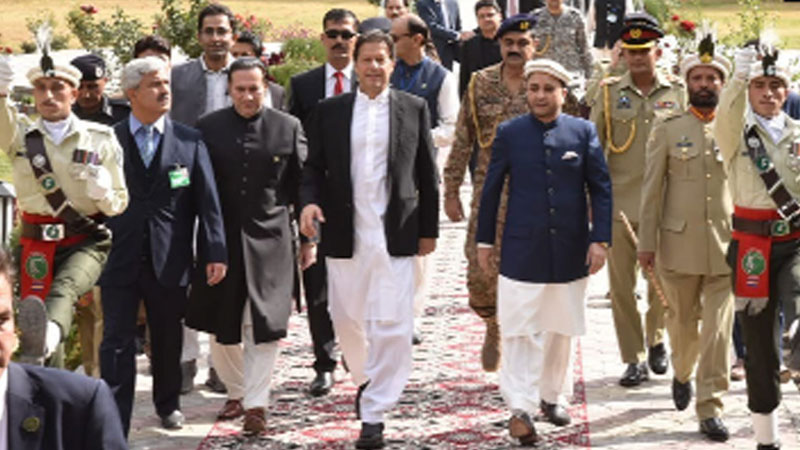 Prime Minister Imran Khan Friday lashed out at the opposition parties for staging the so-called ‘Azadi March’ in the federal capital in a bid to topple the democratic government and categorically said neither he will resign nor any corrupt person will be given a National Reconciliation Ordinance (NRO).

“When you run out of food, more will be sent to you, but you should not expect any amnesty from me,” the prime minister said while speaking at a public meeting here. “This is a new Pakistan. Sit as long as you want to. When your food runs out, we will send more. But we will not give you an NRO,” he added.

The prime minister said the opposition parties are too much confused and they have no clear agenda. “Bilawal Bhutto is participating in the march as a liberal while Mahmood Khan Achakzai, a strong opponent of Maulana Fazlur Rehman, is also attending it,” he wondered. “If you ask PPP, they will talk about inflation; if you talk to PML-N they won’t know why they are there. JUI-F will decry a ‘Jewish conspiracy’ [to undermine Pakistan],” he said. “When Maulana Fazlur Rehman is there [in Islamabad], we have no need of Jewish conspiracies,” he added.

He said the country cannot progress until and unless the menace of corruption is rooted out and those who looted the country in the past have been taken to task. He said the nation knows all those people and also the reality of ‘Azadi March’. “The corruption cases of all the unemployed political orphans, rightists and leftists, who have gathered in the federal capital, have surfaced and none of them will be spared,” he asserted.

He came hard on Jamiat Ulema-e-Islam-Fazl chief Maulana Fazlur Rehman and the opposition parties, saying gone are the days when the name of Islam was used for making money and to reach the corridors of power. He was critical of Maulana’s role as the Kashmir Committee chairman, who, he said, is a favourite of the Indian media which is promoting him as if he is an Indian national.

The prime minister said two opposition parties in their 10-year tenure increased Pakistan’s debt fourfold. The total debt in first 60 years was $6 billion which reached $30 billion in last 10 years, he said. The people who siphoned off the looted money through money laundering and their children are now billionaires and not ready for accountability, he added.

Imran Khan said corruption has destroyed the societies and countries, and that Pakistan Tehreek-e-Insaf (PTI) has struggled against the menace for 22 years. “Those nations become developed and progressive who spend money on their human beings,” he said.

The prime minister paid tribute to the martyrs of 1947-48 Independence War from Dogra Raj, saying he has come there to celebrate the 72 Independence Day with the people of Gilgit Baltistan. The Gilgit-Baltistan, he said, is the land of ghazis and martyrs, and its people must be thankful to Allah Almighty that they are not experiencing the sufferings which the people of Indian-held Jammu and Kashmir are facing right now. He said the scenic Northern Areas have great potential of tourism.

Imran Khan said the present government is focusing on promotion of tourism in these areas as it has opened Pakistan for international tourists. The people of 70 countries will be given visa on arrival along with no objection certificate, he said.

The prime minister said the present government is focusing on resolving the basic issues of Gilgit Baltistan, which was ignored by the past regimes. The scenic beauty of the areas can be exploited to its true potential, and for the purpose the government is planning and in contact with foreign countries and investors to bring investment for the development of infrastructure, he said, and assured the people of the resolution of their problems, saying availability of electricity in winter will be ensured in the area.