Smog returns to Punjab as EPA fails to perform its duties 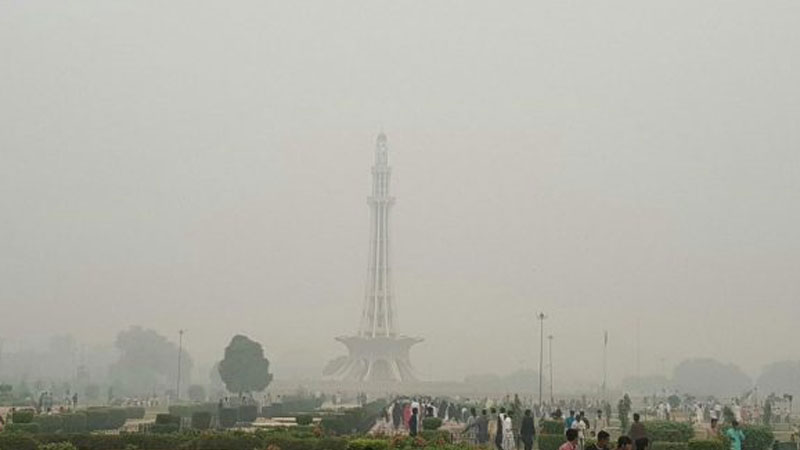 Provincial capital Lahore and its neighbouring districts have been facing toxic smog owing to excessive pollution level-making the city world’s second pollutant country in the world, thanks to authorities concerned.

Yesterday, the air quality monitoring station installed in US Consulate Lahore indicated that the Air Quality Index (AQI) of city as 469 which was far higher than the limit given in Punjab Environmental Quality Standards (PEQS). But, Punjab Environmental Protection Agency’s (EPA) is still unable to show the actual picture of the scenario while showing the unrealistic data in this regard.

The Amnesty International on Wednesday also has raised its grave concern over poor air quality of Punjab while saying non-provision or clean air. “The government’s failure to protect people from exposure to hazardous air in Punjab risks violating their human rights to life and health.” It stated further that the government of Pakistan needed to do much more to adequately address such a severe public health crises-one that endangers people’s health and even their lives.

This recent situation of air quality once again has exposed the Air Quality Monitoring System of EPA as its air pointers which were procured in June 2017 are unable to measure the air quality properly. These five air pointers became controversial which were procured after declaring previously three state of the art Air Quality Monitoring Stations (AQMS) as unfit. Many experts raised questions over their procurement, saying these were not capable to measure the air quality. National Accountability Bureau (NAB) also initiated an inquiry over the alleged corruption in its procurement. That inquiry is still in process.

Since the smog was first appeared in Lahore on November 2, 2016, environmentalists and different segments of civil society raised their concerns over the deteriorating mount of air pollutants in Punjab and Lahore in particular. The matter was also taken into Lahore High Court (LHC) after which smog commission was formed to find out the causes of smog and to suggest the suitable ways to deal with the menace. The smog commission in its reports stressed the authorities to take immediate steps to overcome the issue. This was stressed to install 30 air quality monitoring stations to install at strategic locations across the province under short term plan.

However, after passage of one and half years, EPA remained reluctant to implement on the smog commission’s findings and also could not procure a single air monitoring station.

Punjab University Environmental College Principal Dr Sajid Rashid, while talking to Daily Times, said this was the prime duty of Punjab EPA to inform about the pollution level in the city; unfortunately, it has no record of air pollutants which can lead to a devastating situation. “At least three director generals (DGs) of EPA have been changed within this year and amid this situation it is hard to implement any policy properly,” he added. Rashid offered that he was ready to provide his services for the enhancement of EPA.

Aleem Butt, another environmentalist was of the view that if smog commission’s recommendations were implemented then it was possible to combat the issue of smog. He said that that unabated vehicular emissions, industrial emissions, dust and heavy construction work were the causes of this smog and it was EPA’s failure as it remained to update its air quality monitoring system.

EPA officials have been claiming cross boundary air pollution was one of the major causes of smog in Lahore. However, an official in Met Department, seeking anonymity said that so far there was no evidence that recent smog was because of cross boundary pollution. “There is no sign of wind blowing from East to West, so we can claim that air pollutants enter from India to Pakistan,” he asserted.

EPA spokesman Mian Ejaz told Daily Times that crop burning in surrounding districts of Lahore was one of the reasons of current “smog-like” situation. He said that to combat the smog, this was not only EPA’s duty but its duty of concerned department. “Chief Secretary has assigned all the concerned departments to play their role in this regard,” he said.

According to Ejaz, the air quality situation was satisfactory and that was why EPA had not issued any advisory for public.

Meanwhile, Federal Minister for Science and Technology Fawad Chaudhry on Wednesday said that the reason behind the pollution in Lahore was the ‘abysmal environmental conditions in India’.

In a statement on Twitter, Chaudhry said the Minister of Climate Change informed the cabinet that “Pollution in Lahore is caused by cross border field fires and abysmal environmental conditions in India.”

He stated that the level of pollution at Wagah is double than the Lahore city. The minister said the Narendra Modi government in India is failing in every aspect, adding that irresponsible governments are a curse.

Punjab Home Department has imposed a ban on the burning of crop residue, solid municipal waste, plastic and leather items for a period of three months across the province under Section 144 (6) CrPC, 1898.