The Begum is well documented 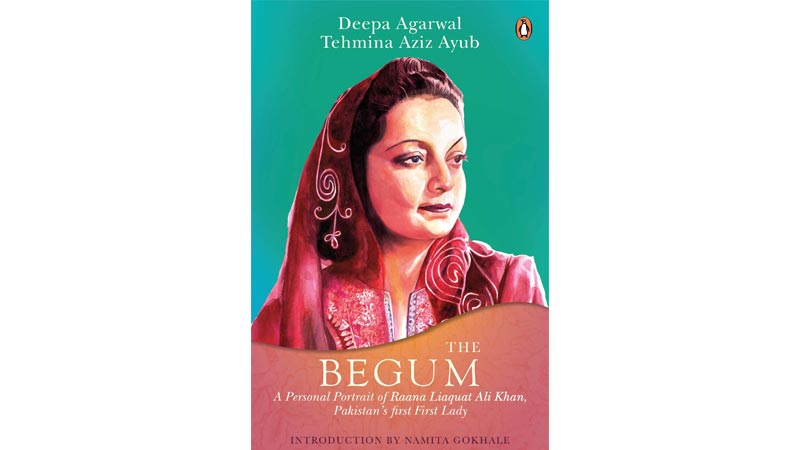 “A sea of women gathered around the dining table at our home in Karachi. Wave upon wave of flowing ghararas rustled across the polished for their myriad colours like a prism reflected on seashells as they moved towards a woman in stark white, the still centre of the storm. Like an anchor she commanded all movement by the sheer weight of her presence.”

The Begum – a Personal Portrait of Raana Liaquat Ali Khan written by Deepa Agarwal and Tahmina Aziz Ayub is a realistic portrayal of the history of the sub-continent.

It has been published by Oxford University Press. The introduction has been written by Namita Gokhale, who stumbled across the story of this ‘remarkable woman’ at a literary festival in Kumaon. And I quote, “She not only came up with the idea of and fostered the fledgling book but also maintained the impetus that kept my co-author Tahmina Aziz Ayub and I going with her nuanced suggestions and indefatigable search for fresh sources to bring depth and completeness to the portrait of the Begum. Meera Pant wife of the Begum’s nephew Hemant Pant obligingly helped to fill in many puzzling grips over several conversations.”

A complete biography of the Begum has not been documented and the author had to rely on interviews, conversations and history books to sift through the differing data and giving it a coherent shape as close to the truth as possible.

Set in the background of political instability in the sub-continent, the book is a courageous and honest portrayal of the struggle of the sub-continent to free itself from the shackles of colonialism. As the scene is all set with the spirit of freedom and independence in the air, it results in the creation of a separate homeland for Muslims by the name of Pakistan: the land of the pure.

However, the historian Hector Bilitho removes many misconceptions about the British Colonizer (pun intended).Whilst the British wanted to subjugate the people of the sub-continent at thesame time, they provided them with the architecture and education that would eventually turn the tables-the inversion of the master slave relationship

Irene (Begun Raana Liaqat Ali Khan) is born in Kumaon a small village in the mountains with a Christian community. As her father Danial Patman opposes her marriage to Liaqat AliKhan because of the difference of religion. We come to know where the opposition is coming from. Her father too had married against the will of his parents. So, she receives the stubborn & determined attitude from there.

“Irene was not the first person in the family to take a step as radical as this.”

Irene had been brought up by her parents in an unusual way of the time. Her father sent her to the best school and her mother instilled morals and values of kindness & compassion in all her children.

Irene was an exceptionally bright student and it was in her college days that she came across Liaqat Ali Khan. Both clicked as they shared mental and emotional compatibility.

Despite the fact that he was 10 years older to her and had already been married and divorced with a child, Irene did not let these facts act as an obstacle to her union with him.

It has been published by Oxford University Press. The introduction has been written by Namita Gokhale, who stumbled across the story of this ‘remarkable woman’ at a literary festival in Kumaon. And I quote, ‘She not only came up with the idea of and fostered the fledgling book, but also maintained the impetus that kept my co-author Tahmina Aziz Ayub and I going with her nuanced suggestions and indefatigable search for fresh sources to bring depth and completeness to the portrait of the Begum. Meera Pant, wife of the Begum’s nephew Hemant Pant, obligingly helped to fill in many puzzling grips over several conversations’

Hector Bilitho, here makes a remark of how despite the divorce Liaqat Ali Khan still provided for the first wife and it was with her consent that he re-married not going into the personal details i.e. for whatever matters?

As Irene now known as Begum Rana Liaqat Ali Khan adopts Islam and develops a deep insight and understanding of the religion, she at various instances quotes Islam as being a religion of freedom and tolerance. Nowhere, does Islam prevent women from coming into the economic, social, cultural, domestic arenas as can be seen through the life of the Holy Prophet who too married a woman double his age i.e. Hazrat Khadija.

Irene and Liaqat Ali Khan are married in 1933 and thereafter both served the country diligently. Despite the hurdles Irene never wavers and stands staunchly by her husband in trying to accomplish the ordeal of the problems that come with independence. She gives birth to 2 sons Akbar & Ashraf who were only in their teens when the news of Liaqat Ali Khans assassination is confirmed. The news spread like a wildfire leaving behind a tough life for the family.

Irene has to undergo difficult circumstances and due to her endearing spirt in the face of tough situations, she does not lose hope. She never falters and holds her head high in the most difficult of situations. She des not ask anyone for charity even in the most miserable of financial situations. It is her resilience and fortitude as well as her progressive mindset that helps her cross all barriers, all limitations.

Namita Pant says and I quote:

“I do not claim to be a historian and my role in writing this introduction arises from The Begum A Portrait of Rana Liaqat Ali Khan the desire as a novelist, as a woman, as an Indian to understand the complex chain of convictions and actions the immediate and historical sources as well as the accidents of fate and destiny, that dictated the course of her life.”

Namita says, it was karma that brought her in contact with Deepa and Tahmina, both of whom wanted to tell the story of this incredible woman from their own perspectives.

Together they tell the story of this intellectual, refined & glamorous woman whose wit and charm made heads turn in awe of her cool attitude in the face of criticism from the opposite gender. There were oo’s and aa’s as she wandered undeterred by the staring gaze of men. She was the centre of attraction in her college days and even after that, but her indifferent and calm attitude to the ‘male gaze’ was what made her stand out!

Though Irene & Namita share a common maiden surname and ancestry. Namita was always in awe of Irene and her family recognizing the tenacity & resilience which came naturally to Kumaoni women intrigued Namita who wanted to “know more about this determined woman, a thinking, feeling human, a creature of her times and circumstances.”

The Begum is not fearful of taking a plunge into the unknown and exotic and it is the driving force behind her success! She is not afraid of taking risks. A bold and honest woman who supports the truth and truth alone!

In her friendship with Kay, “an able administrator and educationist” who stands by her through thick and thin she finds the courage to move on. The loyalty of Jinnah and the fond memories of her late husband give her the impetus to stand upright in the face of adversity.

Despite the strained relationship with Fatima Jinnah who was extremely possessive of her brother she defends her when Ayub Khan throws a tirade of allegations upon the lady.

Such was the friendship between Jinnah and Liaqat Ali Khan as Jinnah is reported to have said he would’ve remarried had he had the option of Irene in his life.

When Zulfiqar Ali Bhutto came into power, he nationalized all private institutions and industry. This was the time when East Pakistan & West Pakistan were separated. As ZAB was assassinated and General Zia Ul Haq came to power. Henceforth, a new era of conservatism replaced the liberal and progressive regime.

It was under such an oppressive regime that Irene now the Begum, still did not give up on APWA- All Pakistan Women’s Association-an industrial home she had setup to empower women in the rural, industrial and economic sectors. She setup a cottage industry to enable the poor women help in the survival and sustenance in a male dominated society. As Raana, retired from the APWA giving instructions only from her room, Yasmine took over. Yasmine looks after APWA to this day but never took up as President.

She died of heart failure in June 1990 and was buried next to her husband in next to Quaid’s Masoleum.

Jitendra (Jitu) her nephew on her death says:

“It was art of her tenacity that never allowed her to complain.”

Irene can rightly be said the first feminist of the sub-continent era. Her life is divided into “2 symmetrical halves” of “personal narrative & political convictions.” Gul-i-Rana was the Bungalow that Liaqat Ali Khan named after Irene, now given to Pakistan in the form of “Pakistan House”, the house of the future High Commissioner.”

Her doctoral thesis on the women in agriculture and her attempts to bring about gender equity within the Islamic state of Pakistan leads one to question:

“Where then did she get her steely resolve and infinite reserve of strength? How did she negotiate the transitions and transformations of history with such seeming ease? I have always been fascinated by this formidable woman, and her ability to stand tall in an over-whelmingly patriarchal society even after losing her husband” with nobody to support her.”

The mystery of the assassination of Liaqat Ali Khans, ZAB & Benazir Bhutto was never solved as all documentation was perished.

As Irene is concerned about the development of the women in Almora, and I quote:

“When is Almora going to improve? The hill women were particularly strong because of their nutritious diet….I miss Almora.”

She describes her home called Shanti Cottage, the very name itself means peace in Hindi.

“Shanti Cottage, fusion of the traditional Kumaoni and colonial architecture, was a comfortable sprawling structure with stone walls and a sloping slate roof…It looked down into a valley that sloped was sharply to the glistening waters of the Vishwanath river, where the cremation ground also lay.”

Whilst, she wants the women to progress she at the same time does not want Almora to lose its charm. It holds her treasured memories. And to urbanize it means to destroy it! Some things remain charming when left untouched and such was the mystery of Almora!

To conclude, Laila Haroon Sarfraz the president of APWA from 2005 to 2014 describes her as an being more than just a president. She pays tribute to this woman of integrity and strength telling how she ‘became an icon.’

A great book, well documented as it weaves the personal with the political!