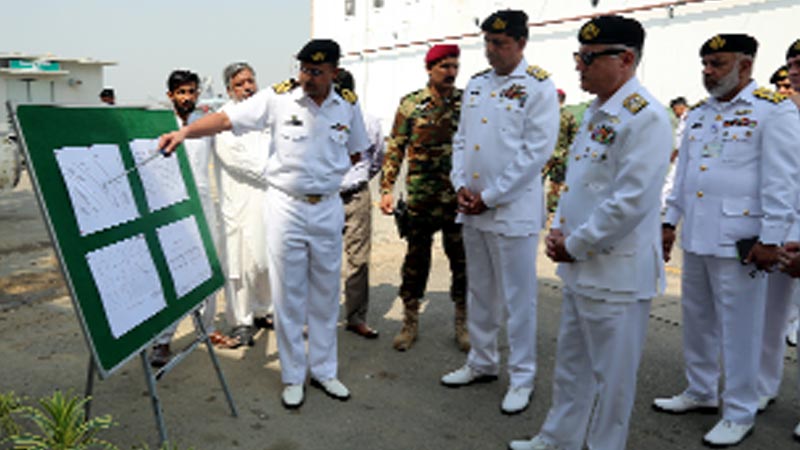 A ceremonial Guard with Honour was presented to Zafar Mahmood Abbasi upon his arrival at the PMSA headquarters. The naval chief laid a wreath at Yadgar-i-Shuhada and offered Fateha, the spokesperson added.

During the visit, the naval chief was briefed over the role and responsibility of PMSA. Later, Admiral Abbasi paid a visit to the newly-constructed training centre of the security agency.

According to a press release by Pak Navy, the Chief of Naval Staff also performed groundbreaking of various operational and administrative projects at Gwadar and Ormara. During the visit, the Chief was briefed about the ongoing operational activities, special measures being employed to maintain the operational readiness of Pakistan Navy Fleet Units at optimum level and on achievements of Task Force-88 for ensuring maritime security of CPEC/ Gwadar Port.

Chief of the Naval Staff inspected the forward posts at coastal installations, interacted with the deployed troops and commended officers for their high morale, commitment and spirit of sacrifice.

The Chief expressed satisfaction over operational preparedness of the Pakistan Navy in undertaking the sacred task of defence of the motherland and reaffirmed the resolve that any misadventure by the enemy shall be thwarted with an iron fist.

During the visit, Chairman China Overseas Ports Holding Company, Mr Zhang Baozhong also called on Chief of the Naval Staff at Gwadar. During the meeting, matters of mutual interest including the security of CPEC and Gwadar Port were discussed.