Violence breaks out in Bolivia over vote count 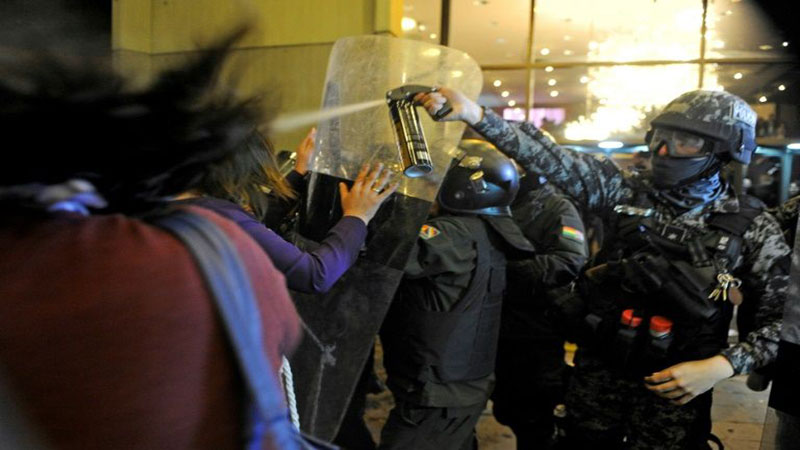 Protesters clashed with police in the mining city of Potosi and attacked the local electoral authority as well as local government offices.

Riot-police dispersed a crowd who tried to storm the electoral offices in the Andean city of Oruro, south of La Paz. Clashes were also reported in Tarija in the south, Cochabamba in the center and Cobija in the north.

Carlos Mesa, who came a close second to Morales in Sunday’s polls — forcing a run-off, according to preliminary results — denounced revised results released by election authorities as a “fraud.” “We are not going to recognize those results that are part of a shameful, consumated fraud, that is putting Bolivian society in a situation of unnecessary tension,” said Mesa.

Mesa, a former president of the country between 2001-2005, accused Morales of colluding with the Supreme Electoral Tribunal (TSE) to tweak delayed results and avoid a run-off.

The United States’ top diplomat for Latin America said the Electoral Tribunal was attempting “to subvert Bolivia’s democracy by delaying the vote count and taking actions that undermine the credibility of Bolivia’s elections.” “We call on the TSE to immediately act to restore credibility in the vote counting process,” the official, Michael Kozak, said on Twitter.

Election monitors from the Organization of American States voiced “deep concern” at sudden changes to the election count to show Morales closing in on an outright victory in the first round.

The OAS observer mission in the country expressed “surprise at the drastic and hard-to-explain change in the trend of the preliminary results revealed after the closing of the polls,” it said in a statement.

Preliminary results released late Sunday showed neither Morales, 59, nor 66-year-old Mesa with a majority and “clearly indicated a second round,” the OAS mission said. The partial results put Morales in the lead with 45 percent of the votes, with Mesa on 38 percent, meaning Morales would have to contest a run-off for the first time.