Progress and development in science, on one hand, has created comfort for humans, while on the other, many so-called blessings have made humans to pay the price. Cell phone is one of those blessings. Many ailments are associated with improper and over-use of technology, cell phone in particular. Teen Texting Tendinitis (TTT) is just one example. 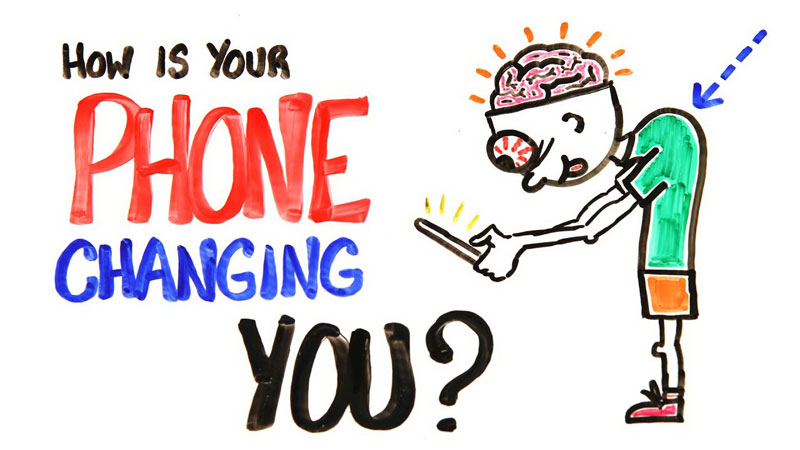 The TTT is a new syndrome caused in teens who text a lot, often for hours a day. The affliction affects the back, neck, arms and thumbs. Symptoms include pain in all the above, along with numbness of thumbs. Therefore, this is a health alert for people addicted to texting on their smartphone, which pretty much means almost everyone under the age of 30.

Recent developments and advancement in mobile phone usage have resulted in a dramatic evolution of the mobile industry. The use of mobile phones has increased so significantly that it has become one of the most dominant influences on society in current times. Frimpong and his co-workers in 2016 conducted a study to see how often students use their phones in classroom, examine mobile phone technologies available for learning, and find the effects of mobile phone usage on students’ academic performance. A sample size of three hundred and six was chosen for this study. On students’ use of mobile phone in classroom, 93.5 percent have used a mobile phone during classes, with 91.8 percent using mobile phones in class to enhance their understanding of topics under study. Also, 80.5 percent were distracted by phone during classes, and that was in the form of visiting a social media site (31.1 percent), text messages (27.6 percent) and receiving calls (25.6 percent).

Overuse of cell phone or smartphone can result in several different physical problems that may cause permanent damage or be difficult to treat, including digital eye strain, neck problems, increased illnesses due to germs, car accidents, and male infertility. Realising the concentration of damages, French authorities have decided that all French children under 15 will be banned from using their cellphones, tablets, and smartwatches at any point during the day. French students returning from summer break will no longer be able to use their phones during a school day. That includes mealtimes. While a ban on cellphones during class hours was already in place since 2010, the new law extends to breaks and mealtimes. Schools are free to choose if they will implement the ban for students over 15. There are also some exceptions to the ban, such as students with disabilities.Banning phones in school was one of Emmanuel Macron’s pledges while campaigning for president.

Under the new law, students must turn their phones off during the day or put them in lockers. Schools have also been allowed to independently deal with the logistics of how students would be kept away from their phones, a news agency said.The law was introduced amid fears that students were becoming too dependent on and distracted by their smartphones.

French authorities and Education Minister Jean-Michel Blanquer hailed the legislation as “a law for the 21st century,” and said that it would improve discipline among France’s 12 million schoolchildren.

Using mobile phones too much in today’s fast moving and globalised world seems to be a necessity. It is almost impossible to imagine our day-to-day life without mobile phones. It is one of the most successful inventions of the 20th century, which has become a convenient means of communication. Modern mobile phones perform many other functions as well; they can substitute for such devices as music players, cameras and organisers. Most of them also provide Internet access and texting.

According to the UN Telecom agency, there are almost six billion cell phone users in the world, with almost eight-six gadgets for every hundred people. There is nothing strange in this fact, as modern people need phones in all spheres of their lives, professional and personal. But we do not notice how much we depend on cell phones and what effects their excessive use might bring. There is data to believe that there is a strong connection between cell phones and cancer. Even though the data remains controversial, most scientists agree that there is a certain threat from using cell phones too much. It is reported that people who talk on the phone for several hours a day are 50 percent more likely to develop brain cancer. The reason for this is the radio waves produced by mobile phones. It is calculated that in every minute the human brain receives about 220 electromagnetic impulses, which are not necessarily harmful, but which affect the brain in cases of prolonged impact.

One cannot deny the sad reality that nowadays many people, especially youth, experience lack of human contact, and they try to compensate it by mobile phone communication, which is not an adequate substitute for personal interaction. Adolescence is not an easy period of life, and at that time, a young person is especially vulnerable. In cases of excessive mobile phone use there is a possibility of becoming addicted to the phone; the real world seems to fade in comparison with hours-long chats and hundreds of messages. These aspects cause psychological problems, as people start to feel uncomfortable in face-to-face communication.

In Pakistan too, just look around, you will find everyone makingindiscriminate use of cell phones. In university lecture halls, backbenchers intentionally choose that area so that they can use their cell phones. Once during an oral examination, when a student did not answer even very simple questions, I wanted to know the reason. I was shocked to know that the student was reading and replying to one thousandSMSes (full package). Hold on, I said to my student. If it takes him sixty seconds to read and reply anSMS, that means he is wasting five hours in texting the messages. That, to me, can be the only reason in decline of his performance.

Pakistani authorities must follow France and come up with a mechanism so that indiscriminate use of cell phone may be discouraged. Cell phone may be a friend, but we have converted it into our master. In schools, colleges and universities, it is a major cause of decline in academic excellence.