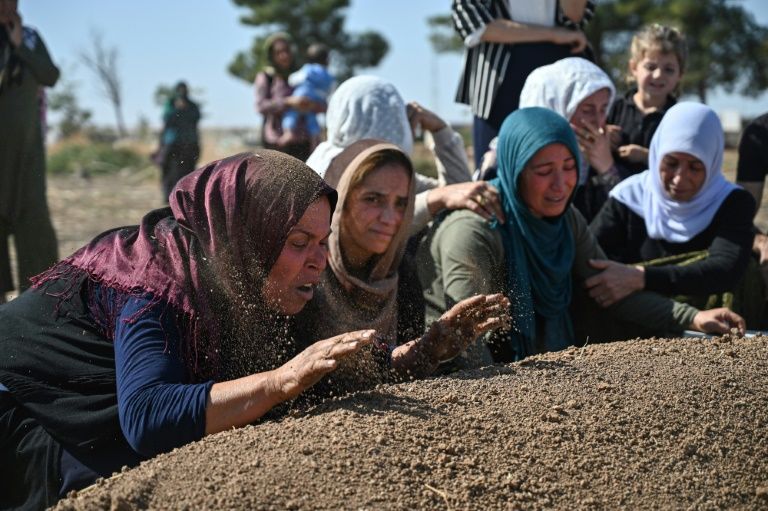 Bearing the brunt of fierce Kurdish counter-attacks, Turkish residents on the frontline of the new offensive into Syria are longing for the return of peace but terrified of speaking openly.

After an emotional funeral prayer on Saturday in the grand mosque of Suruc, several kilometres from the Syrian border, the body of a local neighbourhood chief, Halil Yagmur, was taken to his village for burial.

Yagmur was killed along with two other residents when a mortar fired by a Syrian Kurdish militia crashed into their home. A total of 18 civilians and at least four Turkish soldiers have been killed since Turkey launched its offensive against the US-backed Kurdish People’s Protection Units (YPG) militia in Syria on Wednesday.

The operation has broad support across much of Turkish society, where many see the Kurdish militants as responsible for decades of brutal insurgency.

But anyone who feels differently is not allowed to say so.

The government has ruthlessly clamped down on any sign of dissent, detaining at least 121 people this week for criticising the operation on social media, and investigating hundreds more. It is especially tense in the frontline border towns, some of which have majority Kurdish populations.

“We are scared to say anything against the operation,” said one man in town who asked not to be named, adding quietly that he wished it could have been avoided.

“If you were in our position, you would be scared too,” he said when asked why he was afraid to speak openly.

In the town centre, a 50-year-old resident who also withheld his name, lamented the death of children in Turkey and the shelling of schools. “I am against all kinds of military operations, whichever side,” he said.

His friend flatly refused to offer any opinion.

Many others support the operation, however, as seen from the cheering crowds who greeted the troops as they passed over the border this week.

“May God help our state,” said Selami Arslan, a farmer. “We don’t want Muslims to die. We want the state to have immediate success.”

The cross-border shelling of civilian areas by the Kurdish militants has also hardened attitudes.

At the emotionally charged funeral of a nine-month-old baby on Friday in nearby Akcakale, there were angry chants of “Martyrs are immortal, our land is indivisible” and “Damn the PKK”, referring to the outlawed Kurdistan Workers’ Party that has fought a violent insurgency against the Turkish state for the past 35 years.

The region is no stranger to violence. In July 2015, a jihadist attack on Kurds in Suruc killed 33.

Shortly after, a two-and-a-half-year ceasefire between the government and the PKK collapsed, triggering more unrest.

“We want peace,” said Sarya Dogan, one of those attending Saturday’s funeral.

“What is this, war and more war? We are all brothers and sisters,” she said. Hundreds of families have evacuated the border towns, which the government says have been hit by more than 300 mortar shells since the operation began.

There has been quiet criticism that more was not done to protect them before it started.

But others are fiercely proud of the troops and have come to the frontier to watch the strikes hit the Kurdish-held town of Ras al-Ain in Syria.

“We’ve come to support our soldiers, our state, our people,” said Bub Aslanli, a farmer in Ceylanpinar. “We are praying for them.”