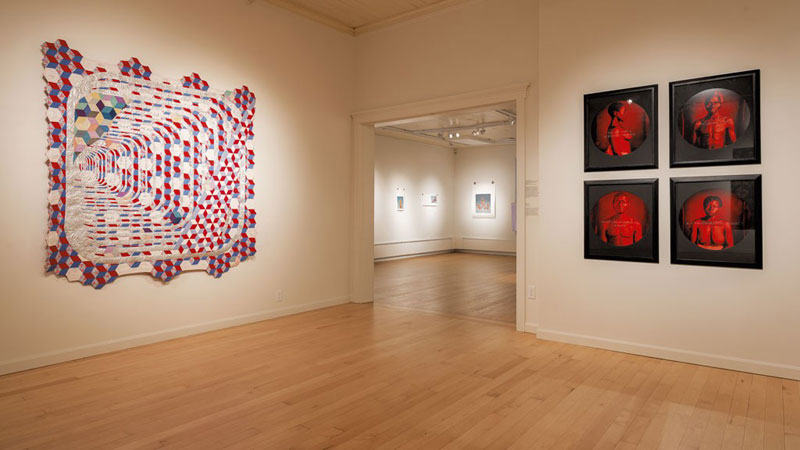 Not that ‘Unbroken Current’ is advertised as such. The two Vermont participants and four national ones do not all consider black identity their art’s main calling card. In fact, two of them – Biggers and Johnson – are associated with “post-black art.” And African American curator Thelma Golden describes post-black practitioners as “adamant about not being labeled ‘black’ artists, though their work [is] … deeply interested in redefining complex notions of blackness.”

Helen Day curator Rachel Moore says in a phone interview, “I was really aware of the different ways the artists identify themselves. There is a tendency to lump things together, as in, ‘It’s a show about artists of colour’. Well, it’s not, actually. It’s broader. It’s a mélange of identities and stories that creates this human experience.’

The exhibition begins with Biggers’ “The Tyranny of Mirrors,” a mesmerizing geometric assemblage made from antique quilts, fabric and silver leaf. The last material creates a pattern of rounded concentric squares aligned on the left side, almost like a view down a futuristic subway tunnel.

The work dates from 2017, the same year the Harlem-based artist won the Rome Prize. But Biggers, who works in painting, sculpture, performance and video, has been altering old quilts since a 2009 commission. That project led him to research a theory, debunked by historians, about the use of quilts as secret signage on the Underground Railroad. As a 2018 New Yorker article on Biggers noted, the artist’s interest in race and history is “at once sincere and ironic.”

If cultural meaning is unstable in Biggers’ work, there’s no mistaking the intent of Weems’ quartet of framed photos from her 1995-96 series “From Here I Saw What Happened and I Cried.” Weems photographed daguerreotypes of South Carolina slaves that were commissioned in 1850 by Harvard University scientist and white supremacist Louis Agassiz. She tinted the photos red, matted them using circular cutouts and added sandblasted text to the glass.

The works are devastating. Each individual’s expression and body bear witness to deep misery and sustained physical abuse. Weems’ textual fragments, floating above the images on the glass, reference the larger humiliations to which the race was subjected. Put together, they read like a sentence: “You became a scientific profile[,] a negroid type[,] an anthropological debate & a photographic subject.”

A 2013 MacArthur Foundation fellow, Weems is interested in how power, sex and ownership have warped both American history and the history of photography. (Harvard, which owns the Agassiz archive, once threatened a lawsuit but withdrew it.) She aims to restore the dignity of these individuals, in part by using circular matting, a form that evokes the intimacy and reverence of Renaissance tondi.

Mack attended Johnson State College (now Northern Vermont University) for his bachelor’s and master’s in fine arts and continues to live in Johnson. His “Revival Lineage,” a pair of shovels with forged faces hanging from a hook, takes up Weems’ theme of restoring identity to the labourer. (Moore says, “It’s important what each work is next to.”)

In Mack’s work, however, African American identity and history are not the driving forces. Instead, the large and small shovels signify current and future generations of labourers. Mack has said in an interview that all his work – in paint, sculpture and metal forging – contributes to “one huge narrative” that he figures out as he goes along.

Helen Day curator Rachel Moore says in a phone interview, ‘I was really aware of the different ways the artists identify themselves. There is a tendency to lump things together, as in, ‘It’s a show about artists of colour’. Well, it’s not, actually. It’s broader. It’s a melange of identities and stories that creates this human experience’

“Indentation,” a remarkably realistic portrait in wood pieces of the artist working at his grandmother’s table, tells an autobiographical part of that narrative. Up close, the work looks like a wood puzzle, but Mack has said he expects viewers to create their own narratives of his work rather than trying to puzzle out his own.

Beltré, a University of Vermont associate professor of drawing and printmaking who divides her time between Burlington and Brooklyn, creates mainly text-based work. Viewers may be familiar with her colour-block geometric letters camouflaged within grids of more colour blocks – a bit like vintage Tetris tiles fitted neatly together – from recent exhibits at the Hall Art Foundation in Reading and the BCA Centre.

At Helen Day, two of these geometric works on paper, “Ask” and “Tell,” are centered on cotton tapestries with tassels at the corners – machine-made reproductions of Beltré’s very different drawings of organic forms. The works’ text messages – “I want to ask” and “I want to tell” – may recall the military’s former “Don’t ask, don’t tell” policy, or they could simply be a plea for communication amid signifiers of domesticity. Just as a viewer requires distance to make out the words, so meaning remains at arm’s length.

Two more works, “Absence 1” and “Absence 3,” are centered on fringed tapestries but don’t feature gridded letters. Using a black-dot-matrix pattern that recalls Roy Lichtenstein’s use of oversize benday dots, Beltré creates shadowy female nudes, or hints of them, washed in walnut ink. Some of the dots are so large they imply an extreme close-up view, yet here, too, viewers need distance to make out the images. In a statement, Beltré says her works “deal with race, social justice and the simultaneous but opposing concepts of invisibility and hypervisibility.”

Two massive works made from oak flooring by Johnson and one on paper by Campos-Pons round out the exhibit. Both artists have work in the permanent collections of the Museum of Modern Art and the Metropolitan Museum of Art in New York, among other institutions. In Chicago-born Johnson’s “Bleed War” and “Street Power,” it’s hard not to see violence in the rough images branded into the wood, the former suggesting a face with gouged wax for eyes and the latter a standing figure. Both abstract images are riddled with branded circles containing crosses that resemble target crosshairs.

“Unbroken Current” takes its title from a critic’s comment on Biggers’ work describing African American history as ever present. That history informs life in Vermont as much as anywhere in the nation. Moore writes in the curatorial statement that the exhibition was spurred into being by two instances of homegrown racism: Bennington rep Kiah Morris’ resignation due to racial trolling and an incident in Stowe in which racial slurs were yelled from passing cars at adopted children of color.

Conversations about race need to happen everywhere, and the exhibition facilitates one in Vermont by bringing local and national black artists’ voices to the fore. It is truly their moment. As Weems remarks in a video clip showing in a side room, “I can see the doors swinging open, and they won’t close for a really long time.”