Polio cripples a person. Although this fact is no more a mystery nowadays, the virus still prevails in Pakistan and Afghanistan. These are the only two countries now where the virus exists and attacks innocent children. Astoundingly, both states share several traits, especially geographical boundaries. 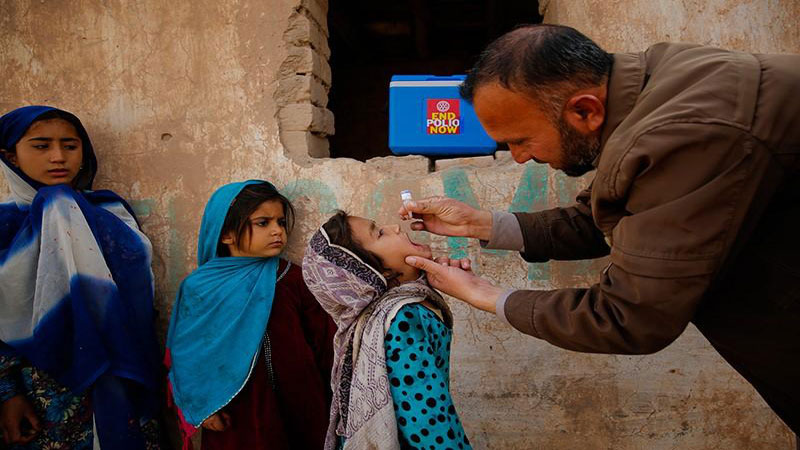 In Pakistan, according to reports, as many as 72 polio cases have emerged this year. The majority of cases,53, are from Khyber Pakhtunkhwa (KPK), and eight, six and five from Sindh, Balochistan and Punjab respectively.

For elimination of the virus, several stakeholders have been making efforts at the national and global level. Pakistan started its expanded programme on immunisation (EPI) as early as in 1978. Many studies have explored the causes, countless suggestions have emerged, and several programmes have been redesigned. Against that context, Pakistan is still unable to receive the title: ‘Pakistan becomes polio-free’. It is now more than four decades. The virus could have been eliminated. For that, Pakistan is in a tight spot.

Why is poliovirus still prevailing in these countries? Questions like this one open a Pandora’s box. Such critical questions connect this Pandora’s box to ideas of critical social thinkers, like Arthur Escobar, an anthropologist, who questions development: why poverty still exists when gigantic stakeholders make massive efforts.

Such crises serve numerous functions for several stakeholders-ranging from a local level to a global scale-like a ‘feast’ that not all happily share, eat and enjoy. These stakeholders lack commitment to eliminate viruses such as polio because the existence of these viruses offers them a profound opportunity to design projects, to hunt funding, to get a job, to earn a livelihood. That is to say, polio’s prevalence in Pakistan is also not free from stakes and politics. The politics of polio is domestic and global.

Surprisingly, there are many who hold parents responsible for the prevalence of polio. However, what goes unanswered is that are parents in our country really mightier than the government or international non-government organisations (INGOs)?

No doubt, a citizen can be influential in some ways, but the said stakeholders always stand more powerful. For instance, government has recently implemented structural adjustments to implement taxes. An ordinary person has no choice but to pay. Why is the government not playing a compelling role in the case of basic needs of its citizens?

In some parts of Pakistan, people refuse to give a polio vaccine to their children; in some parts of KPK, some people resent the vaccination. And that is because there is an aura of suspicion about the immunisation. They are suspicious about the vaccine and the implementers. The latter suspicion is too strong.

No one operates without exercising judgements that are derived from a set of valuations. Some ordinary folks have their reasoning that it is a ‘western plot’ to control a Muslim population. For that, people may partly be at fault; nonetheless, people’s using this rationale has something to do with their background of economic and geopolitical factors. Circumstances have consequences and consequences germinate circumstances.

For elimination of the virus, several stakeholders have been making efforts at the national and global level. Pakistan started its expanded programme on immunisation (EPI) as early as in 1978

On the one hand, our folk reject the vaccination. On the other hand, they do not reject or resent biomedical care, western dress patterns, English language, travelling by air, bus and train, lighting houses with electricity, and using mobile phones and televisions. Most people like and use these things. People give more value to English than their native languages. Someone who speaks excellent English with a British/American accent, she or he is considered as educated and wise. There are numerous inventions that originated in the western world but we are proudly using them.

So in a society where other ‘western’ values and inventions are preferred and practised, what is wrong with taking polio vaccination? Such underlying reasons have seldom been adequately interpreted and incorporated into strategies. At present, we should open up such debates. Implementers of the vaccination programme should devise their awareness campaigns focusing on the aforementioned lines to compel people to think.

The ground is already there. It is perhaps the intentions or strategies that are weak, especially of the influential stakeholders. I already illustrated that in my writingon May 1,2019 in this newspaper, which I do not want to reiterate. Influential stakeholders like the government and INGOs fail en masse, and when that happens, other people usually suffer the consequences. Without mincing words, we should analyse the situation comprehensively and deal with it accordingly. The prevalence of crises like polio is a difficult circle to break, and the only solution is to take a long-term view and resist the temptation to involve transient resolutions.

I end this with comments of people on a news report of one of Pakistan’s leading English newspapers on polio cases a few days ago. The comments read as: “Govt should implement giving much effective injectable form of polio vaccines along with oral form.” Second: “People don’t realise how backward they are.” Third: “This government is failing on all fronts, may it be economy, education or health!” Fourth: “Forget the economy. Polio resurgence is the biggest failure of the government.” And, the fifth: “Shameful.”

These comments show the complexity of the issue and the nebulousness about it.

The writer is a PhD Scholar at the University of Vienna, Austria