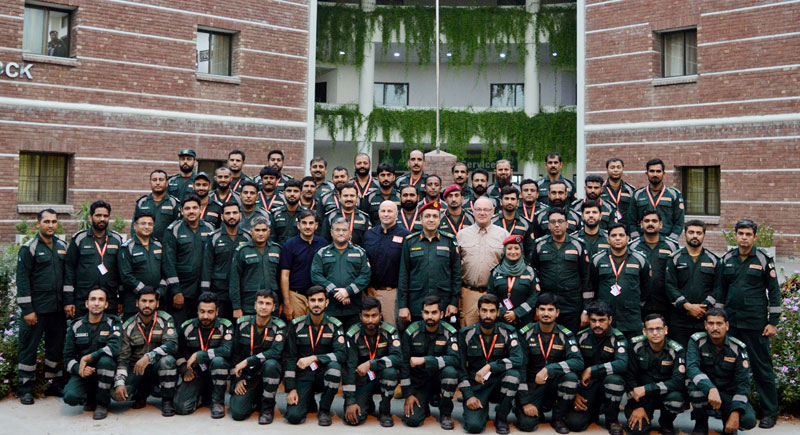 The catastrophic earthquake of 8th October, 2005 in northern areas of Pakistan took away 70,000 human lives and uprooted 3 million people. After five years, in 2010, Pakistan faced another unprecedented catastrophe: floods that affected almost 20 million people and inflicted an estimated loss of Rs 855 billion.

Since 2010 numerous flood have been hitting the country. The country was at receiving end in all respect due to dismal state of rescue services, we did not have any specialised Urban Search & Rescue (USAR) team in the country. October earthquake had huge effects on many precious human lives, infrastructures and economic condition but it also gave us opportunity to prepare ourselves to cope up in better way. We cannot bring back those lives but we can show solidarity with departed souls and disaster affected families by taking preventive steps for future generations.

Keeping in view, Government of Pakistan took numerous steps to build back better and constructed disaster resilient buildings in earthquake hit areas and newly started Punjab Emergency Service (Rescue 1122) by than established the first Disaster Emergency Response Team in October 2006 and subsequently has been involved in the capacity building of its Rescue Team as per international standards. Likewise, Emergency Services Academy started training of rescuers from all over the country to establish a comprehensive emergency management system in all districts of Punjab and in other Provinces of Pakistan. Today the Rescue Service has rescued over 7.5million victims of different emergencies, trained over 18000 rescuers for Punjab, KPK, GB, Baluchistan and AJK. The modern Fire Rescue Service responded over 135,000 fire incidents during last 15 years and saved losses worth over 400 billion. Motorbike Ambulance Service set new standard of Response while dealing over 380978 emergencies in 9 divisional headquarters. Furthermore, the Community Emergency Response Teams have been established in all Union Councils of Punjab and trained over 600,000 first aiders across Punjab under Community Safety Programme.

The thing which motivated me to write this article is to aware general public that we did not stop, we worked hard since October 8, 2005, started efforts from heart of Pakistan city of Lahore, provided sense of safety to Punjab and crossed borders despite of 18th Amendment, provided technical and training support to other provinces to replicate model of emergency management system and finally Punjab Emergency Service – Rescue Team became the first team in the SAARC Countries to be registered with United Nations – International Search and Rescue Advisory Group in February 2015, and now after hectic efforts Mr Sean Moore Mentor/ International Search and Rescue Expert gave Go Ahead to Pakistan Rescue Team for International External Classification in last week of October 2019.

This Go Ahead is not ordinary step; usually teams get this from International Mentor when team is fully prepared and able to exhibit all disaster response functions as per international guidelines. It is matter of great honour for Pakistan to have such expertise which can be offered to other countries to assist and support them in case of any disaster. The difference from 2005 to 2019 is that now the country is not at receiving end only Alhamdulillah.

Pakistan Rescue Team is going to appear in final exercise at the end of October 2019 for United Nations classification and after that Pakistan would be in global Network in field of Urban Search and Rescue. Until now total 53 teams from all over the world have received this recognition. Pakistan Rescue Team would be first team in the SAARC Countries, 9th Team in Asia Pacific and 54 team of the world to be classified and part of this Global Network known as United Nations- International Search and Rescue Advisory Group (UN-INSARAG). Two other teams one from China and one from Indonesia are also in the final process of classification/certification from forum in this year.

UN-INSARAG who provided Certified Mentor, Mr. Edward G Pearn from England, to team. Mr Edward supervised the whole process without any remuneration. He helped in the capacity building process and periodically evaluated the preparation and progress of the Team to finally reach the stage of UN International Classification/ Certification. This process was continued but unluckily, Mr. Edward G Pearn, Mentor for Pakistan Rescue Team developed serious health issues and now he is unable to travel to Pakistan at this final stage of classification due on 28th October, 2019. Therefore, UN-INSARAG Secretariat has helped Pakistan to find new Mentor Mr Sean Moore Mentor for the Team which is mandatory to conduct final exercise for UN- INSARAG Certification. He visited Emergency Service Academy along with another international expert Mr Rob and after observing 36 hours long preparatory exercise, Mr Sean Moore Mentor/ International Search and Rescue Expert gave Go Ahead to Pakistan Rescue Team for International External Classification in last week of October 2019.

Although Founder Director General Rescue Service/ Commander Rescue Team Dr Rizwan Naseer and Team Leader Dr Muhammad Farhan Khalid is very much connected with all administrative departments / stakeholders to facilitate the team of classifiers for conducting final exercise . Being Liaison Officer of Pakistan Rescue Team, I would request all readers, whole Nation to pray for departed souls of the earthquake and also for the success of Team. Now Rescue team is representing the whole country in humanitarian field, this team may not entertain you on television by playing cricket or any other international game but our team would be the expert team of Pakistan in Search and Rescue field. I am heartily thankful to Prime Minister of Pakistan for ownership of the Team as NDMA being focal point/ organisation from Prime Minister Secretariat Pakistan and concerned federal organisations are providing full support to take the country at Global forum in the field of Disaster Response. I believe, the Team would rise the flag of Pakistan at the highest level and Prime Minister of Pakistan and all Pakistani would feel pride on achieving this milestone. Insha’Allah.