* The day started with a discussion on Pakistan's Foreign Policy Challenges with Talat Masood, Khurshid Mahmud Kasuri and Abdul Basit as speakers and Salma Malik as the moderator 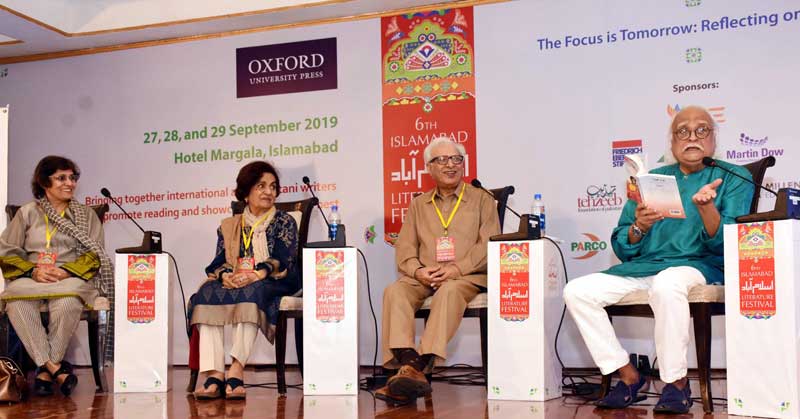 The third and final day of the 6th Islamabad Literature Festival (ILF) drew a very large number of people since it was a Sunday.

Book lovers and culture enthusiasts flocked to the Festival to learn more about the literary endeavours of Pakistani authors from all parts of the country and to experience the nation’s cultural heritage from close quarters.

The day started with a discussion on Pakistan’s Foreign Policy Challenges with Talat Masood, Khurshid Mahmud Kasuri and Abdul Basit as speakers and Salma Malik as the moderator. This was followed by a panel discussion on the subject, ‘Depicting Women in Literature and Drama.’ The participants were Haseena Moin, Asghar Nadeem Syed and Shahnaz Sheikh. The moderator was Maheen Usmani.

Another popular session on the last day turned out to be ‘Shanul Haq Haqqee ki Yaad Mein’ featuring Anwar Maqsood, Fateh Muhammad Malik, Haseena Moin, and Shayan Haqqee. The panel discussion on Ishrat Husain’s book ‘Pakistan: The Economy of an Elitist State’ drew a lot of interest. Along with the author, Asad Umar, Waqar Masood Khan and Melinda Good discussed the important subject of the publication. The moderator was Sakib Sherani. In the panel discussion on ‘Pakistani Cinema: The Rise, The Fall…and the Rise again?’, a large audience turned up to eagerly hear the participants Humayun Saeed, Usman Mukhtar, Khalid Saeed Butt, Naghma Begum, Areeba Alvi and Nadeem Baig. Raju Jamil was the moderator of the session.

A great number of art enthusiasts turned up at the launch of the book ‘Radioactive Decade: An Informal Cultural History of the 1970s’. The editors of the volume Amin Gulgee and Niilofur Farrukh spoke about the book along with the art critics Aasim Akhtar, Nadia Batool and Salman Asif. Omar Shahid Hamid’s latest novel ‘The Fix’ was launched on the occasion. The session was moderated by Nadeem Farooq Paracha.

The book ‘Widows and Daughters: Gender, Kinship and Power in South Asia’ by Anna Suvorova was launched on the third day of the festival. The author along with Tahmina Aziz and Nida Kirmani held a discussion on the book which was moderated by Ilhan Niaz.

A panel discussion titled ‘1919: Jallianwala Bagh and the Century that Followed’ took place between Ali Usman Qasmi, Harris Khalique and Ali Raza. It was moderated by Aliya Iqbal-Naqvi.

The 6th Islamabad Literature Festival came to a close with Arshad Saeed Hussain, Managing Director, Oxford University Press (Pakistan), saying in his closing remarks: “I am really privileged to have organized the 6th Islamabad Literature Festival with the help of my team. These were three days of unparalleled inspiration and enlightenment for all of us and I am sure the people of Islamabad will savour the literary and cultural enrichment that they experienced. It was great to see an interesting amalgamation of the different cultures of Pakistan and a blending of our aesthetic sensitivities. The response from the participants and visitors, whether belonging to Islamabad or elsewhere, was highly positive. We had an amazing event with lovely audiences at all times.

The Chief Guest of the ILF Closing Ceremony, Mr. Shafqat Mahmood, Federal Minister of Education, Professional Training, National History and Literary Heritage, said: “The Islamabad Literature Festival has become a regular event in this city that we all look forward to with great excitement. I must congratulate Arshad Saeed Hussain, Managing Director, Oxford University Press (Pakistan) and his entire team for organizing the Festival so competently and bringing together so many men and women of letters as well as renowned exponents of Pakistani culture and the arts. They have given to the people a sense of pride in Pakistan’s literary and cultural traditions which are second to none.

“As the Federal Minister responsible for Education and Literary Heritage besides my other portfolios, I am really grateful to the Oxford University Press for having chosen Islamabad as a venue for an annual Literature Festival. In this way, they have rendered a great service to the nation. They have brought people closer to their roots. This is also one of the prime agendas of our national education policy. While we are adopting all means at our disposal to keep up with technology and to bring our education system in line with technological advancements around the world, we are also fully cognizant of the need, especially of our young population, to quench their thirst for knowledge through the reading habit. They need to be exposed to good and wholesome literature to develop healthy minds and a healthy life. They must have found out after attending the ILF that there is so much quality work being done in our own country. When they come to events like the Islamabad Literature Festival, they discover the inherent richness of our culture and our literary traditions. I commend the Oxford University Press for its great endeavours!”

As a part of the closing ceremony, keynote speeches were made by Dr. Ishrat Husain and Anwar Maqsood.

A Ghazal Night featuring the semi-classical music maestro Ustad Hamid Ali Khan was organized with support from the Tehzeeb Foundation.

The 6th Islamabad Literature Festival was a very informative and insightful event. It underlined the need for more such events to be held in other cities of Pakistan. Karachi and Lahore already have their own annual literature festivals but other parts of the country must also receive such rich exposure. Literature Festivals infuse new life into the intellectual well-being of a people and provide an opportunity for exchange of constructive thoughts and ideas across all social and economic boundaries.