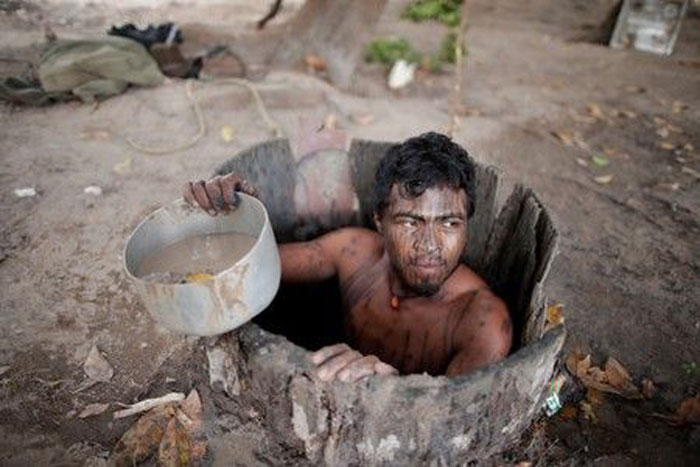 Near midnight, a group of six Guajajara tribesmen with their faces painted for battle listen to the rumble of heavy trucks about 19 miles (30 km) from their village in the Amazon rainforest.

They suspect a caravan of illegal loggers felling trees on their reservation. The police are not coming, but the natives have a plan to fight back.

The “forest guardians,” as they call themselves, hurry to a choke point in the local network of rutted dirt roads and lay in wait, armed with rifles and handguns. As the trucks approach, they ready themselves to spring an ambush, apprehend the loggers and deliver the culprits, along with their equipment, to the nearest federal police station, hundreds of miles away.

The men say they are among some 180 guardians patrolling their tribal land against loggers on night missions.

By day, most guardians carve out an existence farming manioc, rice and other staples in the Arariboia Indigenous Territory, a humid, 1,600-square-mile stretch of rainforest in the northeastern Brazilian state of Maranhao. The rest of Maranhao has lost most of its original rainforest over the past century.

Loggers and ranchers have cleared land right up to the Guajajara reservation and crossed the border increasingly in recent decades. But since 2012, when the ‘forest guardians’ formed, they estimate that illegal incursions have fallen by half.

“I’m proud of the warriors who are continuing the fight, because the Arariboia Indigenous Territory was considered lost,” says Laercio Guajajara, one of the group’s coordinators.

“But we’re showing the world, the country, that our land isn’t lost, that it has an owner.”

Efforts by vigilante groups such as the guardians have gained attention this year, as the Amazon, the world’s largest tropical rainforest, has suffered rising deforestation.

More than 2,400 square miles of the Brazilian Amazon have been cleared so far in 2019, an area larger than the U.S. state of Delaware and nearly twice that registered by satellites in the same period of 2018, preliminary data shows.

Fires in the Amazon, which often follow deforestation, are also up around 50% this year, according to government data, spurring global outcry at the response of Brazil’s right-wing President Jair Bolsonaro.

The president has said the country’s indigenous reservations are too expansive. He has called for mining and industrial farming on tribal land and weakened environmental regulator Ibama, according to workers at the agency.

The Guajajara forest guardians say that has strengthened their conviction that the fate of their land is in their hands.

“Those who should be enforcing laws and protecting indigenous lands are not doing it,” says Olimpio Guajajara, a leader of the guardians. “I have a mission to protect the land.”

An Ibama spokesman told Reuters in August that previous governments were to blame for challenges facing Ibama. The Environment Ministry has said that it takes its role in protecting the rainforest seriously, pledging to halt criminal activity. Ibama did not respond to a request for comment on the Guajajara fight against logging on their land.

Local law enforcement agencies have recognized the guardians’ work in flagging illegal activity and presenting evidence. However, officials say that vigilantism is not the best method for dealing with the issue.

Some guardians have been killed by loggers, the group told Reuters, and several wear face coverings during operations to avoid becoming marked men. They receive no compensation for the risky and grueling detective work, while spending part of their meager incomes on ammunition, gasoline and vehicle maintenance.