Interpreting the mind of a filmmaker

* With the profligate speed of life, Pakistan's cinema trends have transformed

Nothing brings concepts and events to life more vibrantly than a virtuous movie.Pakistan’s cinema industry has also perceived several new growths over few years. Conversely, the revitalization of the cinema has also brought forward a lot of controversy that was infusing soundlessly in the entertainment industry. Unfortunately, the film’s contents apropos the term entertainment aren’t reflecting our country’s ethos. There is no objectivity can be seen in Pakistan’s cinema at present. There isn’t any emergent trend, producing the same as stereotypical romance films. Audiences don’t discover any virtuous script, direction, acting even worthy lyrics to great magnitude. On the hands, it has similarly become a hub of the imitative film industry that only demanding to chase its rival industries so far and filmmakers’ replicating them to make movies that are considering success to create easy ways of money.

As a result, the industry has to face violent antagonism from a growing mind people of the society in this regard. No matter, we all are revolving in the commercialising world but the film is still a medium that represents the cultural values of any nation. With the profligate speed of life, Pakistan’s cinema trends have transformed. Films are just producing on the base of marketing and heavy advertisement on mass and social media. Film producer themselves shoot-out to success or failure of their films.

As sensible and mature audience, it is not plausible what and why Pakistan’s cinema is showing and fuelling to their audience for such inoperable strategies of movies. Whilst, the film is generally believed as an art form that appeals to every person. If we look a few years back, the inclination of ‘item song’ or ‘item number’ is raised in Pakistan’s cinema which transits by opponent industry that drives visual interest.

As sensible and mature audience, it is not plausible what and why Pakistan’s cinema is showing and fuelling to their audience for such inoperable strategies of movies. Whilst, the film is generally believed as an art form that appeals to every person. If we look a few years back, the inclination of ‘item song’ or ‘item number’ is raised in Pakistan’s cinema which transits by opponent industry that drives visual interest

Taking a step ahead in these categories of item numbers, the film maker’s minds astonished us again. One of the latest Pakistan film caught attention with its so-called popular ‘male item number’. What a catchy, upbeat and sexually provocative number that was presented by the director who might have thought that taking clothes off the actor, capturing and choreographing his (typically resembling a woman styles and actions) shaking, waxed, whitening, springiness body movements and hips under tight denims make audience bewilderingly. Despite the fact the dance moves like an ‘item girl’ style and track-based certain expressions are sure to grab immature audience. Singing and dancing has always been a part of our industry. But it is dumbfounding that the filmmakers are exactly showing content that was produced almost ten years ago in the rival cinema that what is the determination of presenting that ‘male item number’. What messages are conveying in the society, are they trying to force women to think that this is the attractive male version. Are they genuinely subsidizing to promote their country’s ethos, and culture globally, no other reason to explicable? One thought provokes in a functional mind that to whom director, actor or writer wants to sway and which people are their targeted audience. 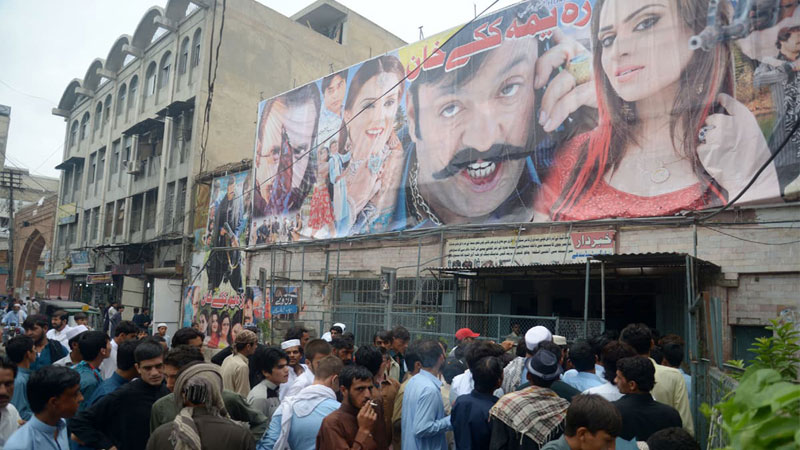 Once the extended thinking process, an active mind unavoidable to ponder and acquire the reasonable rational from the filmmakers of these probes. Have there any relevance to the plot of the movie? What sort of message does this kind of portrayal of a man in our society? Are we trying to endorse that baring is acceptable, and dancing half-naked is acceptable too? Being ‘sexually appealing’ by showing through these ways, is a new trend or face of modern Pakistan’s cinema industry. Accept as true, no filmmaker has even handed justification of these autopsies.

In contrast, Pakistan is already over-passing the struggling face, trying to build the image as an immaculate nation to the world. Right there, our filmmakers are producing ‘item numbers’ with pride. If they vindicate these filth numbers with the appellation of entertainment. Then, the new debate arises, is this category of entertainment, are audience certainly want to lookout that dirt as entertainment. Viewers have to choose either they want to watch that category of entertainment or not. If they don’t wish, then they should stop going to the cinema for promoting and watching these types of films.

Alternatively, it is dire need to step forward by the censor board and play its role in preventing this grunge of movies as well as the profit-oriented producers who are producing films unseeingly without realising its subsequent effects. Leave with this phrase that film can be a better and more effective source of preaching important value with a vibrant and amusing entertainment in people rather than instilling them in the loutish manners.

The writer is an author and educator. She can be reached at e.sadaf5@gmail.com