The Ministry of Utmost Happiness — an unravelling labyrinth of stories

* Twelve chapters having unusual titles with one-liner quotes in between make it a noteworthy amalgamation of literature, history, culture, art and politics with layers of organisation 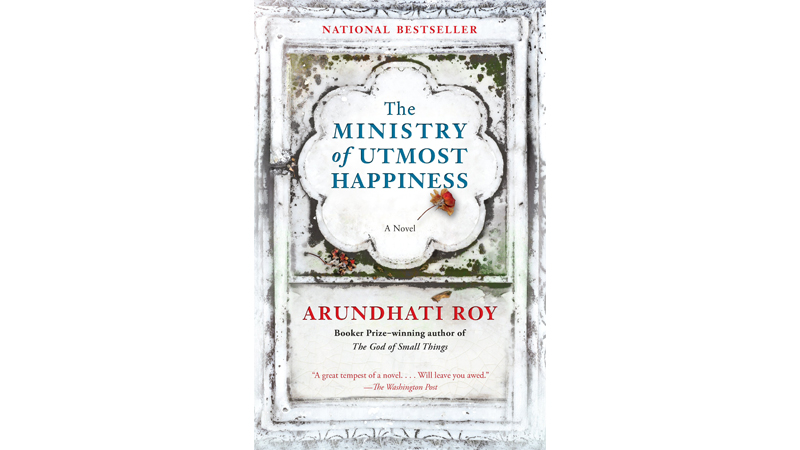 The Booker Prize winning author of The God of Small Things after a gap of almost 20 years has written a masterpiece in its own way; paying heed to all the unheard, giving voice to all the voiceless; a social and a political thriller.

Prior to the writing Roy stated in 2011 in an interview that “I’ll have to find a language to tell the story I want to tell. By language I don’t mean English, Urdu, Malayalam or Hindi. I mean something else. A way of binding together worlds that have been ripped apart”. The magic of that “something else” leave the reader spellbound at every corner of this labyrinth.

Twelve chapters having unusual titles with one-liner quotes in between make it a noteworthy amalgamation of literature, history, culture, art and politics with layers of organisation and dimensions in it making it a satirical composition of gloomy massacres, sheer violation of humanity, brief interludes, unconditional love and simplicity. Reformative in spirit and revolutionary in text is the style Roy has adopted. The peculiar title, The Ministry of Utmost Happiness having multiple connotations is not a surprise as this is one can expect from the magnificent Arundhati Roy summing up all the stories, she came across, in some fifty characters giving each its due share. The three worded dedication (To the Unconsoled) and Nazim Hikmet quotation (I mean it’s all a matter of heart) in actual sets the pace for the upcoming roller-coaster ride. After the sweet revolutionary quote by the Turkish poet comes the first jerk in opening note before contents where the author presentspinnacle of ironycompelling you to ponder over the repercussions of acts of the custodians of life by virtue of which the custodians of death have to die.

It is pretty evident from the interviews and the plot of the novel that she has a very solid observation of the Indian society. The command over Urdu poetry and frequent use of expletives is a real stroke of amazement for the readers – Indo-Pak subcontinent is the targeted audience-but on a larger scale is an effort to aware the international community of the situation of minorities in the subcontinent and especially in the secular India which is pertinent until date. Her politics and activism have been translated quite unapologetically in the concerned novel.

Symbolism is the established theme of the novel where every character and event manifest a greater phenomenon whether it’s a small dung beetle and the conspicuous Anjum Or Musa attending his own funeral and Tilo designing a Kashmiri alphabet. The unique quality of the plot is that every character is the one leading to another, a protagonist in its own way. Anjum be the most prominent one is a transgender has a struggle and a life story spanning over decades. The journey from Aftab to the coquettish and then daring Anjum. Her metaphors for the political leaders are worth mentioning: The Poet-Prime Minister for Vajpayee, for Manmohan Singh the blue turban economist and a trapped rabbit. She considers Modi-Gujrat ka Lalla- as the one who flared up the situation to a next level and to a point of no return in Indian society. The Gujrat Killings of 2002 under his supervision had done a tumultuous change in Anjum’s life. Saffron parakeets with their saffron smiles had squeaked one slogan: Only one place for Musalman! The Graveyard or Pakistan! The circumstances explained quite explicitly as how they folded the men and unfolded the women. The thing which changed her for life was how when she gets noticed by one of them and he said “Don’t kill her, brother, killing Hijras brings bad luck.

It is pretty evident from the interviews and the plot of the novel that she has a very solid observation of the Indian society. The command over Urdu poetry and frequent use of expletives is a real stroke of amazement for the readers — Indo-Pak subcontinent is the targeted audience, but on a larger scale is an effort to beware the international community of the situation of minorities in the subcontinent and especially in secular India which is pertinent until date

Nothing scared those murderers more than the prospect of bad luck.

This originated the idea of the Jannat Guest House and Funeral Services in graveyard near hospital which then became the Home for the Unconsoled (the dead and alive both). Dr. Azad Bhartiya is the key figure of the whole group of idealist activists sitting on a road-side on hunger strike for twelve years.

But why is this Dr Azad Bhartiya here on the footpath while the American dogs are in the Five Star hotel?

Saddam Hussain who opted the name by getting inspired from the video of last moments of namesake leader is the representation of the most oppressed Dalit community, desperately waiting to kill the upper caste police officer Sehwart who was responsible of his father’s death at the hand of a mob in 2002 by charging him of the cow-slaughter.

Tilo has a reflection of Roy herself in the looks and ideology.

“It had to do with the way she lived, in the country of her own skin. A country that issued no visas and seemed to have no consulates”-

How she, not so beautiful to the generalized standards became the centroid of the trio of three men for good. Naga the view-changing journalist, Garson Hobert the civil servant and Musa, architect turned Freedom Fighter in Kashmir. The three of them represent a psychological and material backgrounds of their own. Tilo like Anjum also survived the trauma of state-sponsored terrorism in Kashmir because of the fact that she was alleged of having relationship with one of the most alleged commanders of Kashmir Freedom Movement.

‘These days in Kashmir, you can be killed for surviving.’

In battle, Musa told Tilo, enemies can’t break your spirit, only friends can.

This novel has the most authentic and melancholic description of havoc in Kashmir and this makes it unique. The characters like Amrik Singh- the Indian armed officer to carry out all the atrocities- and Ashfaq Mir-a state-stooge and a Muslim local police officer associated with Indian Government-also provides a deep insight in the scenario. The deaths ofbrief characters of Gulrez of boathouse and little Miss Jabeen (Musa’s Daughter) at the hands of Indian army leave the reader heart-wrenched.

As aptly said that fiction reveals truth that reality obscures. Roy alluded the Jannat Guest House as the ultimate sanctuary, a notion borrowed from the concept of Jannah or Eden becoming the ministry of utmost happiness where the pure and benevolent souls however marginalised no matter what gender, colour, creed or race live together; revering the gone and welcoming the new ones turning a graveyard into a paradise. The discerning quality which separates Arundhati from others is simply her ‘courage’ and ‘truthfulness’. This novel is a strong recommendation for everyone who wants to know the bitter and harsh facts tactfully in honey-coated fiction. The crux is certainly in words of her own: How to tell a shattered story? By slowly becoming everybody. No. By slowly becoming everything.

The writer can be reached at urwa.khurshid123@gmail.com