* PPP MPAs remain seated in House, say they were not taken on board regarding walkout 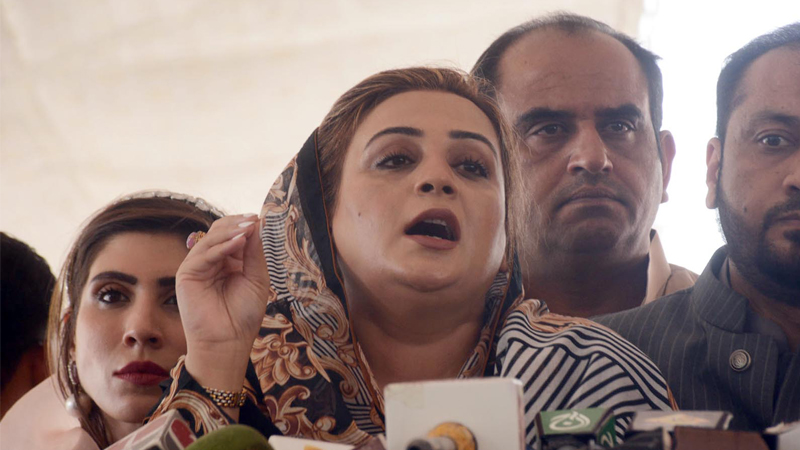 The Pakistan Muslim League-Nawaz (PML-N) continued its protest for the second consecutive day during the ongoing session of Punjab Assembly over the non-issuance of production orders of the MPAs, including the opposition leader Hamza Shahbaz.

The scenes of ruckus and pandemonium were also seen as the MPAs of PML-N left their seats to chant slogans against the government in front of the speaker’s dais. As per the details, the session of Punjab Assembly was started after a delay of more than an hour with Speaker Chaudhry Pervaiz Elahi in the chair. Questions related to the Home department were also on the agenda item and law minister Raja Basharat responded to the queries of lawmakers in the question-hour.

PML-N MPA Rana Mashhood said that it is the right of every MPA to get his production orders in order to attend the proceedings of the House but the government is trying to oppress the opposition by not issuing such orders. He further added that no assembly is completed without its opposition leader but this government is running the affairs of the House in the absence of leader of the opposition that is against the tradition of parliamentary norms. The PML-N MPAs came from the benches to protest in front of the Speaker’s dais and chanted full throat slogans against the Prime Minister Imran Khan and Chief Minister Usman Buzdar. The MPAs of PML-N said that the CM is just a dummy as he has nothing in his hands.

Minister for School Education Dr Murad Ras also passed comments on the PML-N MPAs as he said that they only want the production orders for their leader and they have nothing to do with the welfare of general public. Speaker gained some time from the opposition to further deliberate over the issue of production orders. Rana Mashhood said that the PML-N can’t let this House to proceed in the absence of its opposition leader.

All the MPAs of PML-N walked out from the house amid the sloganeering against the government. They staged demonstration at the stairs of Punjab Assembly where they also started raising slogans demanding production orders for incarcerated MPAs. Speaking on the occasion, PML-N’s MPA Kh Imran Nazir who remained minister for health during the last tenure, criticized the government over the recent outbreak of dengue and deaths due to the fatal disease. “Our colleague Kh Salman Rafique worked a lot during the last tenure against the dengue as he was the health minister at that time but he is behind the bars now. This government should call Kh Salman on the production orders and get free tuition from him,” said Nazir. The PML-N MPAs delivered speeches at the stairs of the Punjab Assembly against the dengue outbreak and lackluster response of the government to control the epidemic.

Surprisingly, the PPP didn’t join the PML-N in its walkout as there all MPAs kept sitting in the House. Talking to Daily Times, PPP’s parliamentary leader Syed Hassan Murtaza said that we are also in favor of the production orders for MPAs but the PML-N didn’t consult us at all before their walkout.

“They didn’t even bother to talk to us regarding the walkout. So why should we join them in this move,” he said. The session was later marred with the collapse of quorum and Chair Mian Shafi Muhammad adjourned the House to meet again on Thursday afternoon. There will be no session on Wednesday (today) due to a parliamentary conference being held in Islamabad the same day and MPAs are supposed to attend it.