Protests mount in IHK despite clampdown

* There have been 722 protests since August 5, with Baramulla district in northwest and Pulwama in south the biggest hotspots after Srinagar
* JKPC moves Indian Supreme Court challenging abrogation of Article 370 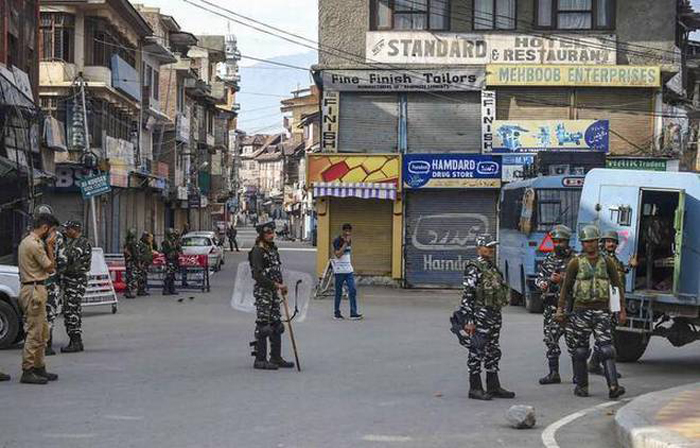 Kashmir has seen an average of nearly 20 protests per day against Indian rule over the last six weeks despite a security lockdown to quell unrest, a senior government source said while talking to an international news agency.

Despite a curfew, movement restrictions and the severe curtailment of Internet and mobile phone services, public demonstrations against India – mostly in the largest city Srinagar – have been constant, the source said. Altogether, there have been 722 protests since August 5, with Baramulla district in the northwest and Pulwama in the south the biggest hotspots after Srinagar, the source said. Since that date, nearly 200 civilians and 415 security force members have been hurt, according to the source. Ninety-five of the civilians were injured in the last two weeks, the official said.

So far, more than 4,100 people – including 170 local political leaders – have been detained across the valley, with 3,000 released in the past two weeks, the official said. It was unclear whether any politicians were among those released.

Indian authorities have so far insisted that outbreaks of violence have been minimal, and that only five civilians have died since the clampdown started.

The relatives of four of those killed told AFP they believed the security forces were responsible for their deaths. The latest updates came as police said Thursday that three men were arrested while transporting weapons and ammunition towards Indian-held Kashmir (IHK).

India deployed extra troops ahead of the August 5 decision to reinforce some 500,000 soldiers already stationed in the region, one of the most militarised places on the planet. Prime Minister Imran Khan on Friday promised to raise the decision to strip IHK of its autonomy at the upcoming UN General Assembly session.

Normal life remains paralysed on Sunday due to continued curfew, restrictions and communication blackout imposed by the Indian government.

Educational institutions, shops, markets and business establishments continue to remain closed while public transport is off the roads across the Kashmir valley. Communication services like mobile, internet and TV channels are closed in the entire Kashmir valley and in some parts of Jammu region.

Patients, doctors and other medical staff are facing difficulties in reaching hospitals due to curfew and other restrictions. Foodstuff, medicines and other essential commodities have run out of stocks, adding to the miseries of the people. The occupation authorities continue to place almost all Hurriyat leaders, including Syed Ali Geelani, Mirwaiz Umar Farooq and Muhammad Ashraf Sehrai, under house arrest or in jails.

Meanwhile, a plea has been filed in the Supreme Court of India by the Jammu and Kashmir People’s Conference (JKPC) challenging the revocation of Article 370 which granted a special status to IHK.

According to reports in the Indian media, the JKPC has filed the petition seeking the president’s rule in the disputed valley be declared unconstitutional and void.

Challenging the decision by the Indian government, the JKPC sought a direction to declare the state reorganisation act and the presidential orders as “unconstitutional and void”. Separately, a Public Interest Litigation (PIL) has been filed in the Indian Supreme Court against the illegal detention of children following the abrogation of Article 370 and an unprecedented lockdown in Occupied Kashmir. The petitioners have submitted that there have been certain reports specific to children, which describe violations that include loss of life and liberty and that the reports are serious enough to merit judicial review of the situation with respect to children and to enforce and monitor certain immediate corrective action.

On the other hand, Indian police during the continuing acts of state terrorism martyred a civilian in custody in Jammu city. Akhlaq Ahmad Khan was arrested and killed in custody by police at Janipur police station of the city.

Advocate Raja Mahmood Khan, who is a friend of the deceased’s brother, told the media that Akhlaq went to market to buy some food but did not return and his mobile was switched off. After 20-25 minutes, his brother got a call from the deceased’s cell phone and an unidentified man, who was over the phone, told him that he got the cell phone from the market.