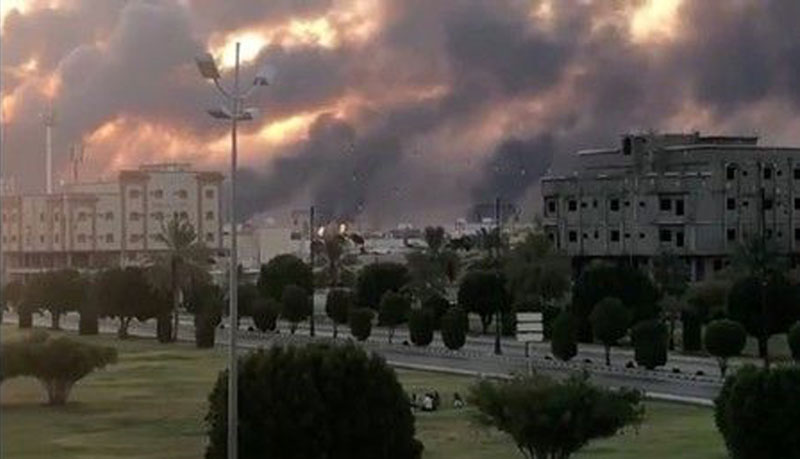 Yemen’s Iran-aligned Houthi group on Saturday attacked two Saudi Aramco plants, including the world’s biggest oil processing facility, sparking fires in the latest flare up of violence in the Gulf.

Saudi Arabia said it had brought the blazes under control, without specifying whether oil production or exports were affected. State television said exports were continuing.

The drone strikes on the world’s biggest oil exporter come as state oil giant Saudi Aramco has accelerated plans for an initial public offering to as early as this year, and follow earlier cross-border attacks on Saudi oil installations and on oil tankers in Gulf waters. Saudi Arabia, leading a coalition of Sunni Muslim countries that intervened in Yemen in 2015 against the Iran-aligned Houthis, has blamed Iran for previous attacks, which Tehran denies. Riyadh accuses Iran of arming the Houthis, a charge denied by the group and Tehran.

The extent of damage from the drone strikes in Abqaiq and Khurais provinces remains unclear. Nine hours after the pre-dawn attacks, Aramco has issued no statement and the authorities have not reported on casualties. Abqaiq is located 60 km (37 miles) southwest of Aramco’s Dhahran headquarters. It contains the world’s largest oil processing plant, handling crude from the giant Ghawar field and for export to terminals Ras Tanura – the world’s biggest offshore oil loading facility – and Juaymah. It also pumps westwards across the kingdom to Red Sea export terminals. Khurais, 190 km further southwest, contains the country’s second largest oilfield. Many Western employees of Aramco live in Abqaiq. The U.S. Embassy in Riyadh said it was unaware of any injuries to Americans from the attacks.

Hours after the strike in Abqaiq, a Reuters witness nearby said fire and smoke were still visible. Earlier video footage verified by Reuters showed bright flames and thick plumes of smoke rising towards the dark pre-dawn sky. An emergency vehicle is seen rushing towards the site.

The Saudi interior ministry spokesman said Aramco industrial security teams fighting the fires since 0400 (0100 GMT) had managed to control them and stop their spread. He did not identify the source of the drones but said an investigation was underway.