Andreescu fends off Serena comeback to win US Open 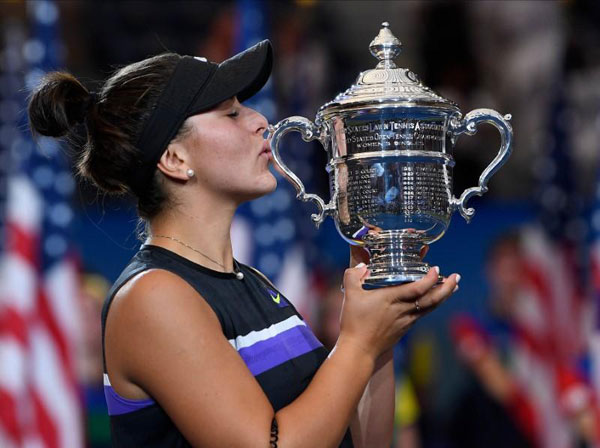 NEW YORK: Canadian teenager Bianca Andreescu claimed her first Grand Slam title in a hard-hitting, nerve-jangling 6-3 7-5 win over Serena Williams on Saturday that put the brakes on the American’s bid to equal the all-time record. Andreescu matched Williams’ power throughout the slugfest and kept her composure under intense pressure to fend off a late comeback from the six-times champion. The 19-year-old dropped her racket after hitting a blistering forehand return winner on match point to seal victory at Arthur Ashe Stadium and collapsed on her back after embracing her defeated opponent. “It’s so hard to explain (what the win means) in words,” Andreescu said. “I’m just beyond grateful and truly blessed. I’ve worked really, really hard for this moment and I can’t complain. This year has been a dream come true,” she added before collecting her $3.85 million (£3.14 million) winner’s cheque. “And now to be able to play on this stage against Serena, a true legend of the sport, is amazing.”

Andreescu, the first Canadian to win a major in the professional era, prevented Williams from equalling Margaret Court’s record of 24 Grand Slam singles titles. Williams, who has been denied the milestone in four slam finals since claiming her last major title at the Australian Open in 2017, was gracious in defeat. “Bianca played an unbelievable match,” she said.

“If anyone else could win the U.S. Open – except for Venus – I’m glad it’s Bianca,” she said with a laugh, referring to her older sister who had cheered her on from the players’ box, which also included Meghan Markle, the Duchess of Sussex.

The fearless Andreescu pressured Williams from the outset, electing to receive after winning the coin toss and immediately breaking her childhood idol. Shouting “come on” after winning key points, Andreescu’s vicious forehands kept Williams on the back foot while costly errors, including a double fault on set point in the first, put the American in an early hole. With her back against the wall trailing 5-1 and facing championship point, Williams mounted a spirited comeback to draw level at 5-5, leading to deafening roars from the packed crowd in the biggest tennis stadium in the world. Yet Andreescu, who covered her ears at times, regained her steely composure to cross the finish line with an emphatic forehand winner, her 19th of the match. For Williams, her normally trusty serve proved her undoing. She only managed to put 44 percent of her first serves in play and her nine aces were almost offset by eight double faults, three of which came on break points.

Andreescu was the sharper of the pair, committing almost half as many unforced errors as Williams and thumping down five aces of her own. While a fierce and fiery competitor on the court, Andreescu apologised to the disappointed crowd for beating the home favourite . “I know you guys wanted Serena to win. I’m so sorry,” she said.

Meteoric rise: While Andreescu was a virtual unknown before this year having never made it past the second-round of a Grand Slam tournament before, Saturday’s breakthrough win did not register as a shock in the tennis world. She had made her presence felt by storming to the Indian Wells title in March and after a knee injury forced her to pull out of the Miami and Rome tournaments earlier this year after just one match, she won the Rogers Cup in Toronto last month. She came into Flushing Meadows seeded 15th and many thought her bruising groundstrokes, creative shotmaking and speedy defence would give any opponent trouble.

That has proved especially true for the world’s best players, who she seems to reserve her best tennis for. With her win over world number eight Williams she improved to 8-0 this year against top 10 opponents. After ending last year ranked 178 in the world, she will reach a career high of number five on Monday. Asked if she planned to be greedy in her pursuit of more Grand Slam glory, she said: “I think so. “I love this feeling too much.”