Meghan flies to NYC to watch Serena in US Open Final

* 'It is a last-minute trip,' a source told The Times in London 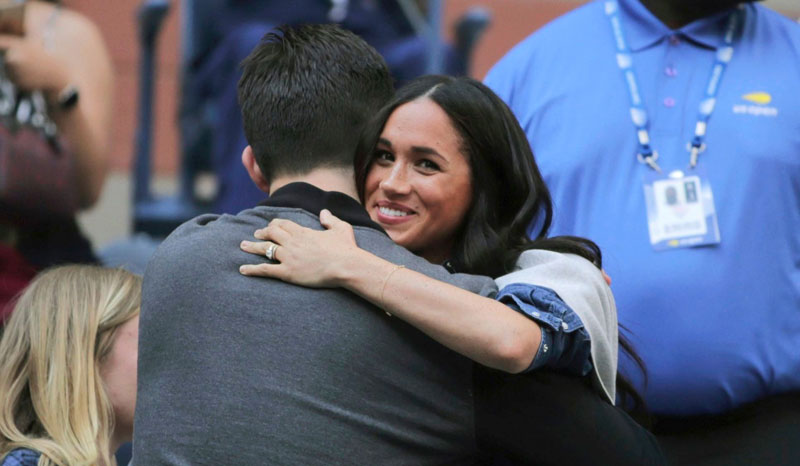 Fresh off her maternity leave, actress-turned-royal Meghan Markle is headed back home to American soil for a very special reason.

The 38-year-old Duchess of Sussex boarded a commercial flight on Friday to New York to embark on a weekend trip to watch her longtime friend Serena Williams compete in the 2019 U.S. Open Final. The tennis star is set to face off against Bianca Andreescu on Saturday to try to secure a record-tying 24th Grand Slam singles title.

“It is a last-minute trip,” a source told The Times in London. “Excited to support her friend and then come back.” Meghan Markle reportedly is travelling without Prince Harry or Prince Archie and is accompanied by security, the outlet said.

This marks Meghan’s first known solo trip abroad since giving birth to the couple’s son, their first child, in May, and first known time she has travelled back to her native United States since she attended her baby shower, which Serena co-hosted with Amal Clooney, in New York City in February.

Meghan Markle reportedly is travelling without Prince Harry or Prince Archie and is accompanied by security, the outlet said

The trip comes weeks after Meghan and Harry drew controversy and accusations of hypocrisy for using private jets to fly to the south of France and Ibiza over the course of a few days. The royal couple has been vocal about their support for environmental issues. Elton John later defended them, saying they visited him in France and he paid for their plane.

Meghan’s solo visit to the U.S. also comes weeks before she, Harry and Archie will embark on a trip to South Africa between September 23 and October 2.

Meghan and Serena have been friends for several years. They met in 2014, when they played on the same team at DIRECTV’s Celebrity Beach Bowl.

In July, Meghan watched Serena compete in the 2019 Wimbledon tournament in England, which the duchess attended with sister-in-law Kate Middleton and her sister Pippa Middleton, as well as friends. It marked Meghan’s first solo outing since giving birth.

“Just having her in general as a friend is great,” Serena told reporters after one of the matches. “She’s such a great friend and a great person as well, and always positive, no matter what. So it’s so good to have people like that just to know.”