* The session took place in the section of the museum which holds a simulation of the train which carried immigrants to Pakistan at the time of Partition, symbolising a journey 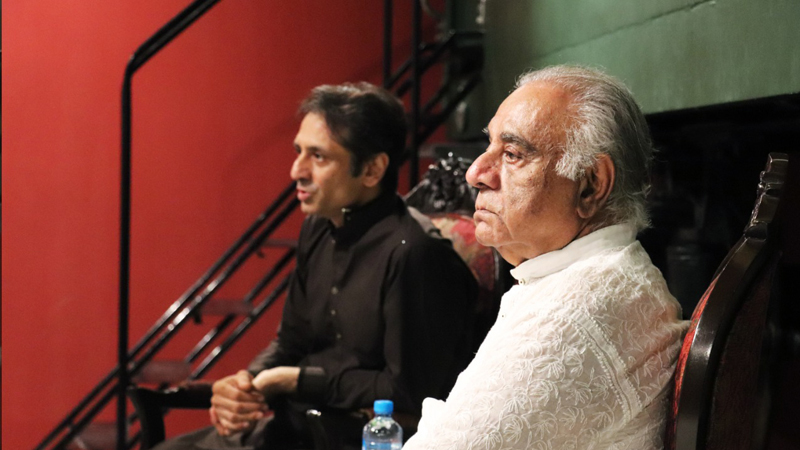 At the National History Museum located inside Greater Iqbal Park in the city of Lahore, the first session of the series, Intergenerational Talks was held on the eve of August 31, 2019 from 5pm to 7pm.

Intergenerational Talks, as told by the administration of NHM, is going to be a series of discussions carrying the purpose to acquaint people with those families who have been working for generations for Pakistan and earning name in their respective fields, giving the chance to the residents of the country to feel proud of them. One such clan is the Taj-Tahir clan, with the living two generations of which the series was inaugurated last week.

The session took place in the section of the museum which holds a simulation of the train which carried immigrants to Pakistan at the time of Partition, symbolising a journey and complementing the discussion that was to take place. On chairs with their backs towards the simulation were seated the father and son, Naeem Tahir and Ali Tahir, and the audience, seated on wooden benches were facing them, the front bench reserved for Naeem Tahir’s wife, Yasmin Tahir and their daughter-in-law, Wajeeha Tahir.

The discussion, patterned in the way that Ali Tahir would narrate the history of the family and Naeem Tahir would elaborate important points and provide related interesting information, started off with a national anthem after which the son took the attendants back to the year 1898, telling that he belongs to the fourth generation of the family.

The story, as was told by Ali Tahir, began with his great grandfather from the maternal side, Maulvi Mumtaz Ali, a man holding a predilection for education and realizing its importance for both men and women in the times when Muslims, as a suppressed nation, were deprived of education as well along with other necessities. While Sir Syed Ahmed Khan focussed solely on the education of men owing to the gender biasness that existed in the offices back then, Maulvi Mumtaz Ali came up with the progressive idea of educating those women as well who stayed at homes all day and were never given a chance to attain an exposure of the world outside. This idea of his was manifested in the form of two magazines which he produced, the first being “Huqooq-e-Niswan” and the second being “Tehzeeb-e-Niswan”. However, when the manuscript of one of these was taken to Sir Syed Ahmed Khan by him, he discouraged it, holding the stance that education for men is the need of the time. It is also said that he tore the manuscript apart, but the authenticity of this act is still doubtful. Maulvi Mumtaz Ali did not take the discouragement as a set-back and stuck to his idea, as a result of which he established his own publication house, Daar-ul-Ishaat and initiated the magazines’ series himself.

“While “Huqooq-e-Niswan” was based on those rights of women which have been granted to them by the religion, “Tehzeeb-e-Niswan” spread its content across a wide range and educated the women not only in religion, but also in Science, society and personal care,” told the father and son.

While some of the contributors of the magazines were greats like Allama Iqbal, HasratMohani and Altaf Hussain Haali, Maulvi Mumtaz Ali’s liberalism also became conspicuous in the way that the very first editor of “Tehzeeb-e-Niswan” was his own wife, Muhammadi Begum. The couple was also concerned about the intellectual growth of children, the product of that concern being “Phool”, the first children’s educational magazine to come out of the Subcontinent.

Naeem Tahir then went on to tell that Muhammadi Begum herself was a voracious writer who was also creative enough to make and write stories for her son, the son being none other than Syed Imtiaz Ali Taj.

Syed Imtiaz Ali Taj did not remain impervious to the literary environment around him, and from a very young age, developed a liking for reading and writing. He would watch street theatre off and on, something rampant in those times. At Government College, he became a good friend of Patras Bukhari, later on collaborating with him to produce adaptations of world literature. The duo would place western writings in the context of the Subcontinent during times in which simply procuring foreign works was an uphill task.

The discussion, patterned in the way that Ali Tahir would narrate the history of the family and Naeem Tahir would elaborate important points and provide related interesting information, started off with a national anthem after which the son took the attendants back to the year 1898, telling that he belongs to the fourth generation of the family

Imtiaz Ali Taj’s breakthrough came with “Anarkali”, his play that became the biggest play of the twentieth century, and the notes for which he prepared while sitting in an examination hall after having finished his paper. The play’s popularity is not new to anyone. One interesting thing related to it that was told during the session was that when the first international silent film was made which was to be shot in the Subcontinent, its story was adapted from “Anarkali”.

Naeem Tahir shifted the conversation to Hijab Imtiaz Ali after this, who was the wife of Syed Imtiaz Ali Taj and happened to be a novelist, short story writer and essayist. Hijab Imtiaz Ali is also the recipient of Sitara-e-Imtiaz which she received for her far-sighted, dystopian novel titled “PagalKhana” which foreboded an environmental crisis long before the concern shifted to it.

“It was in 1934 that Hijab Imtiaz Ali decided to become a pilot, the inspiration having come from watching an eagle flying,” told Ali Tahir. “She fulfilled her dream and became the first female pilot under the British Empire.”

Syed Imtiaz Ali Taj and Hijab Imtiaz Ali gave birth to Yasmin Tahir, the woman who worked for Radio Pakistan for more than three decades during the times when radio focussed on perfectly enunciated language and did not compromise on the quality of language.

Naeem Tahir said, “Yasmin and I fell head over heels in love. She too had a passion for drama like me and when two months before our wedding I got a scholarship for Drama degree which I couldn’t pursue owing to my imminent wedding, I was asked by the team to bring my partner along too if she is interested. So, right after we got married, we went abroad and I attained a degree in Drama. As a result, I became the secretary for Alhamra Arts Council when I came back to Pakistan.”

However, this was not the only association of Naeem Tahir with Alhamra. Long before his foreign degree, he had cleared the Competitive Examination and due to his respectable post, had succeeded in buying the land for Alhamra, the aid provided by the then existing government. He also got the building’s construction completed after a large number of hurdles.

Naeem Tahir was the only one of his siblings to have gone for Arts, all others being doctors.

He said, “I realized that I had the ability to write drama when as a student of Government College, I wrote a story for the college magazine’s competition and it turned out to be in the form of dialogue. Then I also tried to fulfil my dream of acting and after a long period of waiting, got a role in a theatre play which despite being a side-role, got so much appreciation that I got a lot of coverage in the newspapers, even more than the hero.”

When the discussion came to the last generation, it was told that since a passion for Arts ran in the family, Faran Tahir and Ali Tahir, the sons of Naeem Tahir and Yasmin Tahir, also left their other jobs to pursue acting and direction. It is now a known fact that Faran Tahir is a Hollywood actor of Pakistani origin and Ali Tahir has been performing in a lot of serials from those of PTV to the currently running ones of Hum TV, ARY and Urdu 1. His directorial projects include “Rang”, “Samjhota Express”, “Taj Classics” and “Mohini Mansion ki Cinderellayen”. However, to the shortage of time, Ali Tahir’s wife’s contribution to the era of classical drama could not be discussed in detail, although she acted in the unforgettable play “Poore Chand Ki Raat” and presented herself as an apt choice for a comedy role in Anwar Maqsood’s long play “Do Chaar Baras Ki Baat Naheen”.

The discussion came to an end here and fifteen minutes were given to the audience for questions, the response resulting in the time span stretching across thirty minutes. After that, the moderator of the session told the audience that other discussions in the series would take place soon.

The last message given to the audience by the father-son duo was to stay committed to passion and not let go of it no matter what happens, for according to them, it is the way to success in any field. All the members of the Taj-Tahir clan did not neglect their areas of interest at any moment in time, and are therefore remembered to date for their innumerable contributions to the fields of arts and literature in the subcontinent.