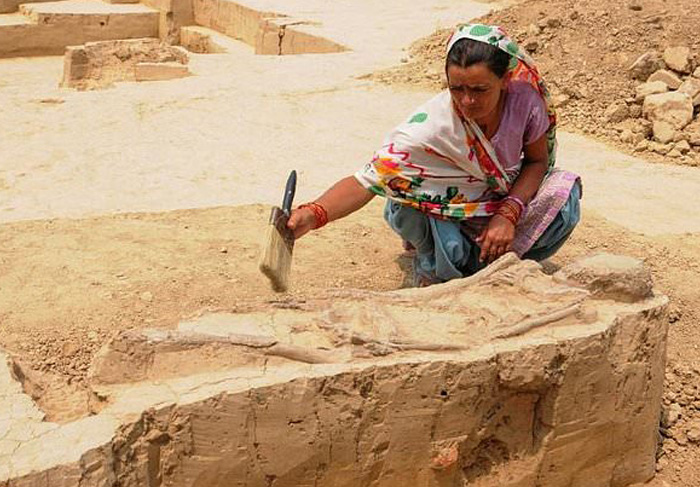 For decades, researchers have debated how Indo-European languages came to be spoken from the British Isles to South Asia.

Now, the largest-ever study of ancient human DNA suggests that the answer may lie with a mass migration of Bronze Age herders from the Eurasian Steppes, starting 5,000 years ago, westward to Europe and east to Asia.

Vagheesh Narasimhan, co-first author of the paper published in the journal Science on Thursday, told AFP that the role of population movements over the past 10,000 years were key to understanding linguistic changes and the transition from hunter-gatherer activities to farming.

“There’s been a lot of DNA work, as well as archaeological work, about both of these processes in Europe,” the postdoctoral fellow at Harvard Medical School explained, but these transformations are less understood in Asia.

A global team of geneticists, archaeologists and anthropologists analyzed the genomes of 524 never-before-studied ancient individuals from Central and South Asia, increasing the worldwide total of published ancient genomes by about 25 percent.

By comparing the genomes to one another and to previously discovered remains, and by placing that information into its historical context through archaeological and linguistic records, the team was able to fill the gaps in our current understanding.

A 2015 paper indicated that Indo-European languages — the world’s biggest language group that includes Hindi-Urdu, Farsi, Russian, English, French, Gaelic and more than 400 others — arrived in Europe via the steppes.

The path of the proto-Indo European languages to Asia was less clear: one school of thought held they spread from farmers from Anatolia (present-day Turkey).

But the paper found that present-day South Asians have little if any ancestry from farmers with Anatolian roots.

“We can rule out a large-scale spread of farmers with Anatolian roots into South Asia, the centerpiece of the ‘Anatolian hypothesis’ that such movement brought farming and Indo-European languages into the region,” said co-author David Reich, also at Harvard Medical School.

“Since no substantial movements of people occurred, this is checkmate for the Anatolian hypothesis.”

There are two new lines of evidence in favor of steppe origin. First, the researchers detected genetic similarities that connect speakers of the Indo-Iranian and Balto-Slavic branches of Indo-European.

They found that the present-day speakers of both these groups descend from a subgroup of steppe herders who moved west toward Europe 5,000 years ago, then spread back east to Central and South Asia in the following 1,500 years.

Another observation in favor of the theory: South Asians who today speak Dravidian languages (mainly in southern India and southwestern Pakistan) had very little steppe DNA, while those who speak Indo-European languages like Hindi, Punjabi, Bengali have far more.

As far as agriculture is concerned, prior work has found that farming spread to Europe via people of Anatolian ancestry.

South Asians, however, share little to no ancestry with the Anatolians, ruling them out, while the archeological record shows the activity also predates the steppe herders, leading researchers to conclude agriculture arrived independently in the region.

A second paper, meanwhile, published in the journal Cell Press by several of the same authors describes the first genome of an individual from the Indus Valley Civilization (IVC), one of the great civilizations of the ancient world contemporaneous with Egypt and Mesopotamia.

Its towns were populated by tens of thousands of people, who used standardized weights and measures, built great roads and traded with places as far away as East Africa.

The team were able to overcome technical challenges posed by the hot, humid and monsoonal climate to sequence for the first time a Bronze Age individual from South Asia.

The DNA belongs to a woman who lived four to five millennia ago buried at Rakhigarhi, the biggest town of the IVC, also known as the Harappan civilization.

The authors believe that modern South Asians are descended from the Harappan people who later mixed with steppe herders who migrated from the north.