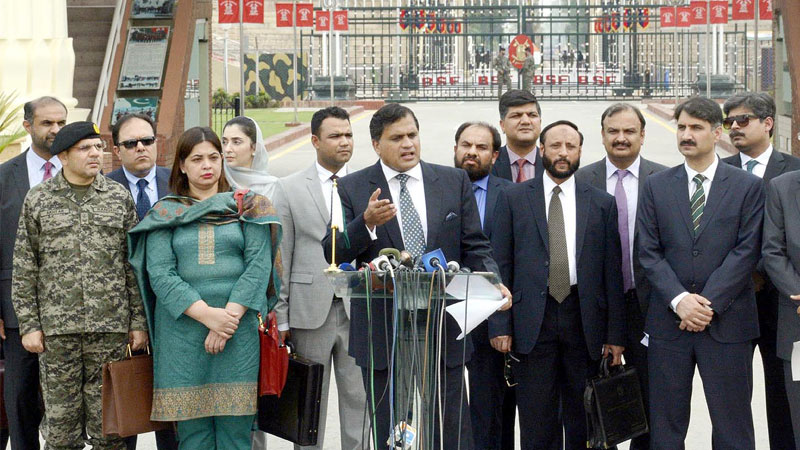 The third round of talks between Pakistan and India on Kartarpur Corridor was held at Attari on Wednesday to discuss and finalise draft agreement on opening of the corridor.

The Pakistani delegation was led by Foreign Office Spokesperson Dr Faisal, accompanied by other officials from various departments.

Later, briefing the media, Dr Faisal said the environment of the meeting between the two countries remained good despite tension over Kashmir, adding that the meeting only focused on the Kartarpur corridor. He said Pakistan has completed more than 90 percent of the work on Kartarpur Corridor, adding that Islamabad is committed to open the corridor by November this year on the 550th birthday of Baba Guru Nanak. To a question about development work done by Indian side at the corridor, Dr Faisal said the Indian government is responsible for what they have done. Dr Faisal said Pakistan will allow the entry of more than 5,000 Sikh pilgrims and special cards will be issued to the Sikh devotees instead of visas. “India needs to show some flexibility as we have taken an unprecedented initiative to reflect our commitment towards the religious minorities,” he added.

FO says 5,000 Sikh pilgrims will be allowed entry and special cards will be issued to them instead of visas

The spokesperson said that the Foreign Office will soon arrange a visit for journalists to show them the progress on development work at the corridor. He said the Indian side will be invited to visit Pakistan for the last round of talks on Kartarpur corridor.

Earlier on August 30, technical experts of both the countries held a meeting at Dera Baba Nanak. During an earlier round of talks held on July 14 at Wagah, both sides had made some progress in finalizing the draft agreement with regard to the modalities. It was agreed to allow visa-free travel for the Indian passport holders and Overseas Citizens of India (OCI) card holders seven days a week.

Pakistan has almost completed work of the corridor project on its side but the work on the Indian side is yet to reach 50% of its completion. The corridor, to be opened on the eve of 550th birth anniversary of Baba Guru Nanak, will allow Sikh pilgrims a direct access to the historic Gurdwara Darbar Sahib in Kartarpur, Pakistan, where Guru Nanak passed away in 1539.

Prime Minister Imran Khan had laid the foundation stone of Kartarpur Corridor to link Gurdwara Darbar Sahib in Pakistan with India’s Gurdaspur district on November 28 last year. The corridor will also be the first visa-free corridor between the two neighbours since their independence in 1947.