* What is Bradlaugh Hall and why is it so important? 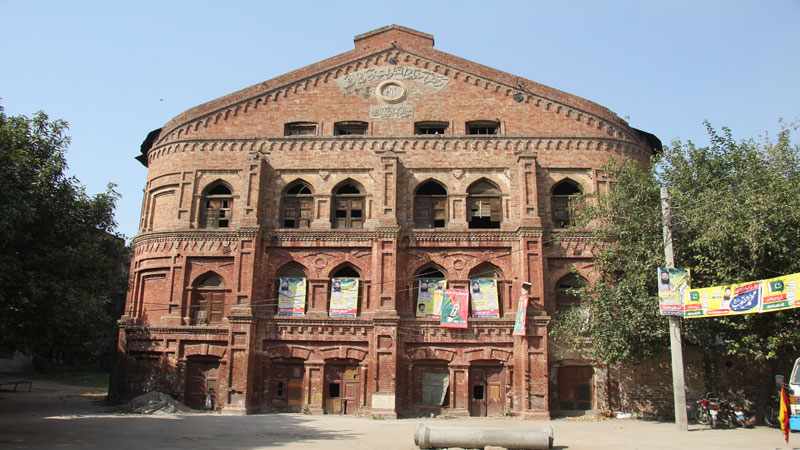 A stunning 19th Century hall located on Lahore’s Rattigan Road; I am sure that this name must be new to the younger generation. With the crumbling structure the identity of this building is also degenerating and that is a point to ponder for all of us.

Bradlaugh Hall remained a symbol of revolution and upheavals for the entire British India. It was established through the fundraising efforts of the Indian National Congress. It was Bradlaugh Hall where the Indian National Congress held its annual session in Lahore in 1893. I found something interesting about this meeting. According to historians the planning for this meeting took almost five years because a dedicated space for political events in Lahore was hard to find in Lahore at that time. It is said that in 1888, a well-known newspaper publisher Sardar Dyal Singh, was able to make Lahore the meeting place for the Indian association in 1893. Sardar Dyal Singh was elected as the chairman of the reception committee of the session. After covering all the expenses of the meeting through ticket sales, Rs 10,000 were saved. Now this amount seems too little but would you believe that this huge structure of Bradlaugh Hall was constructed from that amount…only Rs. 10,000. In past and especially in 1800s this amount had immense value and that is why we still see that structure intact in Lahore because it was made with sincerity and loyalty with accurate utilization of money. It was no doubt an expensive and a lavish building.

Bradlaugh Hall was named after Charles Bradlaugh who was a British MP in the late Victorian era and was fond of India and outspoken in his belief in social justice and women’s rights. It is stated in various historic references that Mr. Bradlaugh visited India in 1889 and attended the 5th annual session of the Indian National Congress. In recognition for his activities, Surendar Nath Banerji–a senior leader of the Indian National Congress–installed the dedication plaque at Bradlaugh Hall on October 30, 1900 when this building was inaugurated. This plaque is still seen on the Bradlaugh Hall.

That was not the end to Bradlaugh Hall … In 1956 when Bradlaugh Hall and the surrounding neighbourhood were flooded it was then handed over to the National Technical Institute. Bradlaugh Hall was used by the school for several decades till late 1990s. The management then rented the building out to teachers of nearby government schools and other short-term clients.

Historian and architects claim, and I think that is right, that the separation inside Bradlaugh Hall and renting it out in small portions to various tenants having little or no understanding of the historical value of the property lead to extensive damage to the interior of the building.

Bradlaugh Hall, a hall that played a central role in the independence of Indian sub-continent met with an ill fate after partition. Bradlaugh Hall was famous for the meetings of all communities including Muslims, Hindus and Sikhs without any discrimination. Different people would organize political sessions, used to give receptions to visiting leaders in the city, and hold well famed literary sittings of that time, those called mushairas.

Many plays and other cultural activists were organized here with the focus on freedom of India. Notables who frequented this hall and attended meetings included, Allama Muhammad Iqbal, Maulana Zafar Ali Khan, Dr Muhammad Ashraf, Mian Ifthikhar uddin and Malik Barkat Ali, Bhagat Singh, Jawaharlal Nehru, Lala Lajpat Rai. As part of Gandhi’s non-cooperation movement, Lala Lajpat Rai founded the National College inside this hall to impart quality education to the Indians, who did not want to join British institutions. 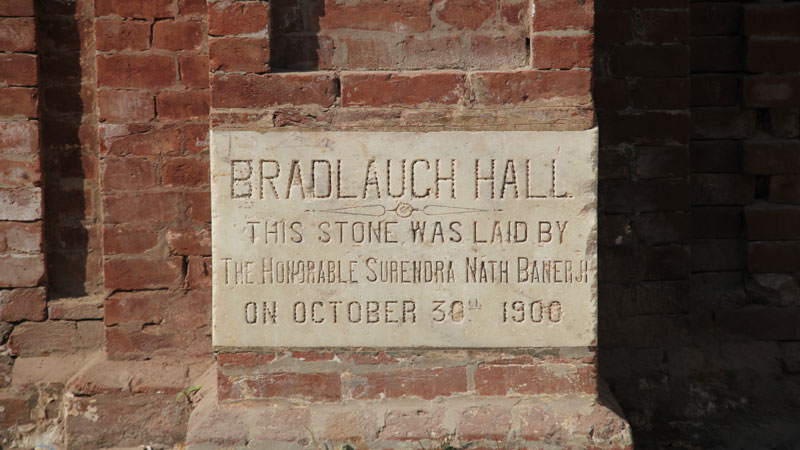 Bradlaugh Hall reflects colonial architectural elements mixed with local climatic, requirements. The high ceilings and thick walls depict the typical colonial elements of constructions. You will see much similar architecture in Lahore built during the same period. I remember that my house in Forman Christian College Lahore ha similar thickness of walls and height of the ceilings.

The structure sadly is now crumbling and neglected by everyone with political posters on it and broken windows. Unfortunately, at present Bradlaugh Hall is crying for help to restore its lost glory but no one is listening to its sighs. The main door is locked, the stage, on which freedom fighters sang the lyrics of independence, has decayed and now no songs are being sung in the Bradlaugh Hall.

I wonder why this building skipped from the eyes of the authorities and heritage lovers and I never see any one paying any heed to this gem. The Evacuee Trust Property Board held the possession of Bradlaugh Hall claiming themselves as the legal owners of that property. Before being taken over by Evacuee Trust Property Board it had been served as a storeroom of a steel mill however it has been closed since 2009.

Bradlaugh Hall should be conserved and opened for public by giving it a respectable access. It should be converted into a museum, art gallery and functional hall where cultural activities can take place regularly. Revival of mushaira and meetings should be done here and I’m sure that it will once again be the hot spot for the people.