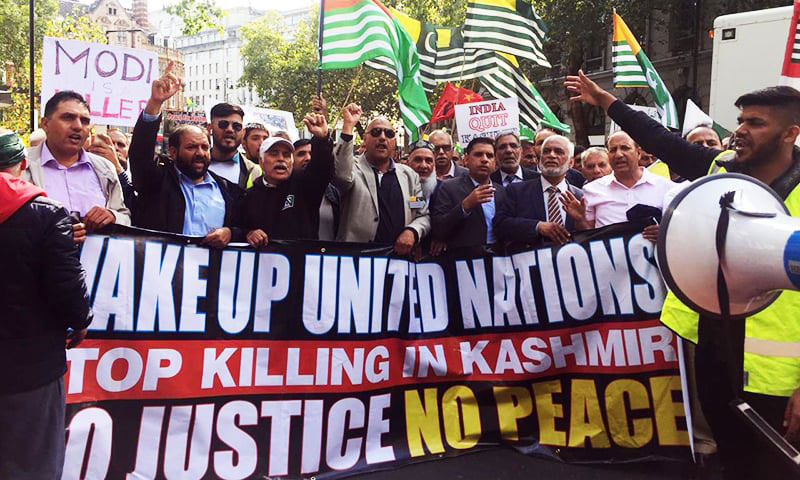 Thousands of protesters rallied in London on Tuesday to express solidarity with the people of Indian-held Kashmir and condemn the lockdown imposed by the Indian government in the occupied valley since August 5 when it revoked the region’s special status.

Protesters arrived on buses from all over Britain to gather at 12 noon at the Parliament Square across the Palace of Westminster. The march started from London’s Parliament Square and proceeded to the Indian High Commission to express solidarity with the oppressed people of Kashmir and demand India to lift curfew and end the human rights violations.

Called by the Jammu & Kashmir Liberation Front (JKLF), the ‘Kashmir Freedom March’ was supported by all Kashmiri and Pakistani groups, including the British chapters of Pakistan Tehreek-e-Insaf (PTI), Pakistan Muslim League-Nawaz (PML-N), Pakistan People’s Party (PPP), and the Jamaat-e-Islami Pakistan (JI), as well as a number of human rights groups.

Protesters threw shoes, eggs, and water bottles to express their anger at the Indian government’s actions and atrocities against Kashmiris who are cut off from the rest of the world due to a communications and media clampdown. They stayed there for over two hours, dispersing peacefully later. A heavy contingent of police was deployed at the scene to prevent any violence.

As part of the code of conduct, neither were politicians and leaders allowed to make speeches nor was any political party permitted to bear flags. Only Kashmiri flags were visible all around.

A day earlier, the Indian High Commission in London was infuriated after the UK’s Shadow Culture Secretary and Deputy Leader of Labour Party Tom Watson had highlighted the ‘humanitarian crisis’ in the occupied valley and expressed solidarity with the Kashmiris. “I’ve never seen more worry on your faces than I’ve seen in the last 25 days. You’re worried about your loved ones that you can’t communicate with,” he had said, noting that people in occupied Kashmir ‘do not get medical supplies’ and how ‘there’s no food or water or basic provisions’. “That is a responsibility for all of us in the international community,” he had stressed.

Infuriated by Watson’s words, the Indian High Commission in London had responded by saying, “Most of the phones are working, no shortage of essential supplies and medicines, shops open, transport plying normally, most schools open, restrictions on movement substantially relaxed.”