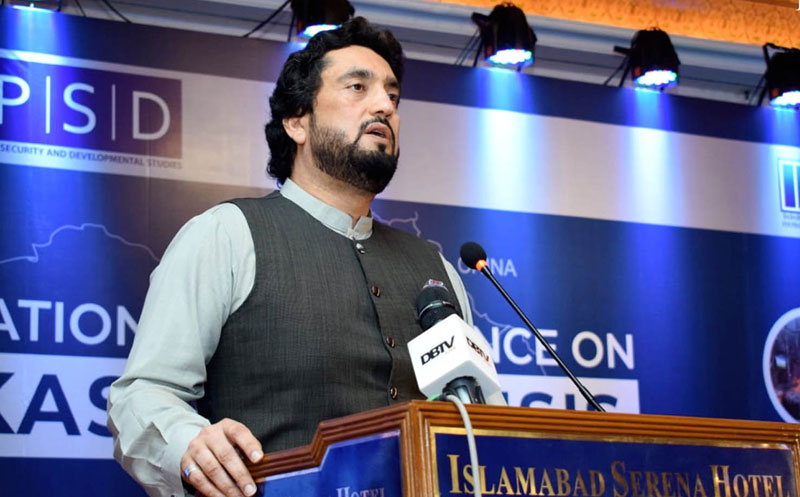 Minister for SAFRON and Narcotics Control Shehryar Khan Afridi has said that the annexation of Kashmir by India is the first step by the Modi regime towards a bigger ill design of strangulating China-Pakistan Economic Corridor (CPEC).

Addressing the participants of ‘National Conference on Kashmir Crisis’ held under the aegis of DBTV and Center for Peace, Security and Development Studies (CPSD) here, the minister said Prime Minister Imran Khan is leading the awareness campaign against Hindutva and is ripping Modi’s plan apart through his tweets which are a major source of education for the world on Hindutva ideology. “The world needs to know that If India crosses our red lines, Pakistan won’t have any other option but to become Tippu Sultan by sacrificing everything we have,” he said.

The minister said Indian Prime Minister Narendra Modi is implementing a vicious plan of forming ‘Greater India’ by capturing the neighbouring states. “Under his Hindutva ideology, Modi is pursuing his plan of Greater India. However, what Modi needs to know is that Pakistan is the biggest hurdle in the way of his vicious designs. Pakistan Army is well equipped and our people are battle-hardened. We will foil Modi’s plans,” the minister said.

Afridi said it is high time that Pakistan exposes evil designs of Modi and in this regard Pakistani and Kashmiri diaspora can play a lead role in telling the world the true face of Hindutva agents. “I visited European countries last week and addressed conferences on Kashmir. I highlighted the Indian atrocities being committed against helpless people of Kashmir. In sustainable goals, the world speaks of humanity but humanity is suffering in Kashmir. The world must act now,” he said.

He said that India trained 1000 students of mass communication in 1980s and tasked them to promote Indian interests abroad. “Now the same Indians control the world’s mega media houses. Indian IT experts also control social media tools like Twitter, Facebook and Instagram. They associate Pakistan with everything bad. The world is least bothered about Gaza. We need to raise awareness for world audience,” the minister said.

Afridi said that overseas Pakistani must transform themselves into ambassadors of Kashmir and speak out against Indian occupation of Kashmir. “They should also engage MPs of their host countries and use writing skills to promote the Kashmir cause,” he added.