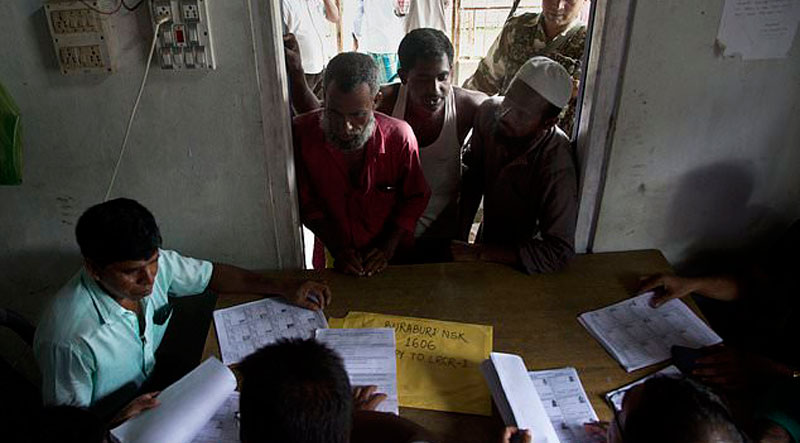 Like many people in the northeast Indian state of Assam, Sajid Ali Ahmed, 25, is worried because his name did not appear on a controversial citizenship list released by the state government over the weekend.

Sajid, a close relative of India’s fifth president, Fakhruddin Ali Ahmed, and his family are among about 1.9 million people left out of the National Register of Citizens – a mammoth exercise to weed out undocumented immigrants from Assam’s more than 32 million residents.

The NRC’s publication Saturday, the result of a four-year application and vetting process, has evoked sharp reactions across Assam, which witnessed a popular anti-migrant movement in the 1980s.

The process was based on voluntary applications rather than a home-to-home census. All residents of Assam, which shares a long, porous border with Bangladesh, were invited to apply to be included on the list with documentation that would prove their lineage to a bona fide resident of the state on or before March 24, 1971, when Bangladesh became an independent country.

“Initially, we could not manage to get our family’s legacy documents and missed the NRC application deadline. When we finally got the legacy document linking it to my grandfather, the name was spelled wrongly,” Sajid said, referring to the former Indian president’s brother.

“We got entangled in legal formalities and eventually our names did not appear in the citizens list,” Sajid said.

The family lives in Borkukuria, a village of around 200 households of both Assamese-speaking Muslims and Bodo tribespeople, around 80 kilometers (50 miles) west of Gauhati, the state capital.

Sajid’s family and others left off the list have the opportunity to try to prove their citizenship at one of hundreds of tribunals presided over by people who are not judges. They have 120 days to file appeals with the tribunals and can take their case to higher courts. If no appeal is filed, a district magistrate makes a referral to the tribunal to strip them of their citizenship.

It’s unclear what will happen to those ultimately branded as foreigners, because India has no treaty with Bangladesh to deport them. Earlier this summer, India’s Supreme Court criticized the central government and that of Assam, saying thousands of people who had been declared foreigners over the years had disappeared. About 1,000 others are being held in Assam’s overcrowded prisons.

Critics have decried the citizenship list as a naked attempt to deport millions of minority Muslims, many of whom have entered India from neighboring Bangladesh. But those who have been leading the fight for such a list say the project is meant to protect the cultural identity of Assam’s indigenous people, no matter what their faith is.

For hundreds of years, the verdant, hilly state of Assam has drawn workers from present-day Bangladesh to work in agriculture. Major waves of refugees arrived after partition in 1947, when the British Raj split India and Pakistan into two independent countries, and in 1971, when Bangladesh broke away from Pakistan.

But resentment of these immigrants runs deep. Advocates of a citizenship registry say that because of the influx, immigrants in Assam have gained more political clout than natives.

The mega exercise to prepare a citizens list has cost the government an estimated 1.5 billion rupees ($20.8 million) and the labor of 52,000 state officials. Assam is the only Indian state that has updated the country’s only previous citizens list, which was published in 1951, but Prime Minister Narendra Modi’s Hindu nationalist Bharatiya Janata Party has pledged to roll it out nationwide.

However, the BJP in Assam has been quick to reject the list, asserting that thousands of genuine Indian citizens have been left off but that thousands of illegal migrants have been included. State BJP leaders have said they could request India’s Parliament or the state legislature to bring bills to address this ahead of foreigner tribunals’ verdicts.

“The NRC in its current form cannot be regarded as an error-free list of citizens,” Assam BJP chief Ranjit Dass said.

Senior BJP leader and Assam minister Himanta Biswa Sharma said they may appeal to the Supreme Court, which was monitoring the NRC process, to allow officials to re-verify about 20% of a random sampling of names on the list of people who reside in areas bordering Bangladesh, as well as 10% re-verification elsewhere in Assam.

Assam shares a 262-kilometer (163-mile) border with Bangladesh, stretches of which are crossed by unfenced international rivers.