* To supplement Independence Day celebrations, the Daily Times will highlight, all of August, the individuals who
continue to make Pakistan proud. Our 28th interview is with award-winning actress Sanam Saeed 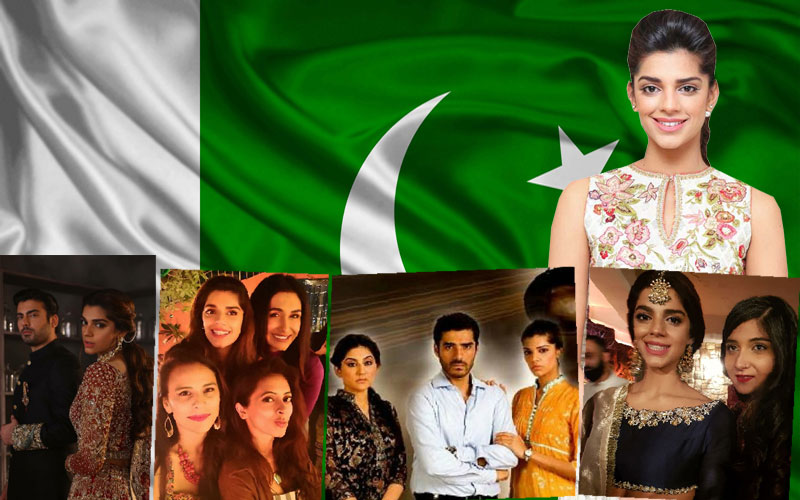 You have worked in films and drama serials both. Which medium do you enjoy performing in more and why?

And theatre! Theatre has and always will be my first love. Nothing beats the energy of a live audience and I have never been through more rigorous and extensive detailing when it comes to character development and script analysis like I have while preparing for a theatre play. I wish we had time to prep like that for films. As far as films and drama serials go, I love the process that unfolds while making a film. It’s almost like doing a play for the screen. More time is spent on perfecting one scene at a time. You get to follow an emotional arc when performing in film unlike television serials that are spread over 22 to 32 episodes. Television acting can be the most taxing and tiring of them all. But then the reach television has trumps the audience at a theatre or in the cinema halls. In the end as an actor I can’t say which one is better. They all have their charm you see. You can affect someone’s day with a good play. You can provoke thoughts through television. And you can challenge stereotypes and take risks and change mindsets through cinema.

Are you content with how women are paid in the industry as compared to men or do you think there’s gender discrimination in the payment methods?

From where I’ve been seeing things and for as long as I’ve been working in this industry, whether as a VJ, actress, model or female celebrity, I’d have to say that women have been paid better than our male counterparts in this industry. Television in Pakistan is a female dominated industry and so are most of the products that I see advertised for the most part. So I can’t complain. Compared to other places I think I’d like to say as far as the payment structure is concerned, everyone’s pay scale matches their screen time, effort, talent and star power.

You have been very active in raising a voice against heinous crimes in the society as well as important social issues. Do you limit your concern to social media only or have you been practical in your bid to try and eliminate these menaces from the country?

Where I feel I need to voice my support on social media I choose that medium. And when I need to support a cause with my time and presence because those causes are something I feel very strongly for I stay off of social media. In those cases it’s time or financial support that is needed more than a voice.

Which social issue plaguing the society do you feel the most strongly about?

I feel most strongly about mental health and child abuse. It was unbelievable and shocking to learn that Pakistan was number one when it came to child abuse. I thought we as a nation had a strong sense of community and family and that children were raised by everyone around. I guess I was really naive to think that. And then there is mental health and the lack of awareness, conversation and assistance that needs to be discussed.

Currently, I’m working on a commercial film you’ll be hearing about soon. I’m grateful to always get a call for a serious role, a thought provoking or a complex role and I always look forward to projects like that. But while the time is now and I’m not going to be getting any younger I thought I’d challenge myself and step out of my comfort zone. I want to surprise myself and the audience. So currently I’m working on a really fun commercial project.

If you were made PM for a day, tell us three things you would do first.

I’d do my best to put an end to corruption and start from the bottom up doing things the correct or rather just way. I’d be very serious about putting a heavy fine on any litter thrown carelessly so that the Keep Pakistan Clean & Green motto can become a reality. And I would try to setup more vocational training centres for starters.

Your drama serial ‘Zindagi Gulzar Hai’ was a global hit. At the time you signed up for it, did you have a feeling it would generate the kind of response that it did? Tell us a little about your experience working on the drama? What had made you say ‘yes’ to it in the first place?

I had no idea that seven years later people would still be watching it for the first time or 10th time and write in to me about how the show changed their life. The script was a page Turner. It had you hooked from the first line. Actually the book had me hooked from the first line. I read the book Umera Ahmed wrote before she adapted it for Hum TV. I read that as soon as I was told the script was an adaptation. I loved that fact that so many women were behind this project. The writer, producer, director, main protagonist. That the mother and sisters had such important parts to play in the story too. I knew this was going to be a good drama serial. I didn’t know it would prove to be such an influential and powerful drama.

You are the proud recipient of many awards and laurels. What according to you has been your biggest achievement so far?

My biggest achievement so far hasn’t been any of the statues of appreciation but instead the letters that come pouring in. When a mother writes to me that she fought for her daughter to go to college and not get married after she saw ‘ZGH’. Or that a girl went ahead and became a CSS officer because she was inspired by ‘ZGH’. Or when a woman told me she found the courage to leave an abusive husband after years because of ‘Mera Naseeb’. Or when people living far away from their aging parents went back to spend time with family and one even got to have those precious moments with her mother just in time before she passed away because of our film ‘Cake’. These real life stories affected by a film or television serial, to me feel like my biggest achievements so far.

Always put your best foot forward my mother said. Acting was something I knew I wanted to do since I was little. My passion and dreams keep me motivated to keep doing better and better and making a difference along the way. And of course the wonderful heartfelt appreciation and encouragement from the fans is always a boost to do my best.

When a mother writes to me that she fought for her daughter to go to college and not get married after she saw ‘ZGH’. Or that a girl went ahead and became a CSS officer because she was inspired by ‘ZGH’. Or when a woman told me she found the courage to leave an abusive husband after years because of ‘Mera Naseeb’. Or when people living far away from their aging parents went back to spend time with family and one even got to have those precious moments with her mother just in time before she passed away because of our film ‘Cake’. These real life stories affected by a film or television serial, to me feel like my biggest achievements so far

From family drama to romantic comedy and thriller to patriotic, you have worked in all kinds of films? Which of these do you think appealed the most to Pakistani audience?

I think from the work I’ve done, the family drama genre was a winner. I see how people find a connection within family dramas. Our family values are so deeply rooted. And so many different relationships are highlighted in our dramas. Sisters, brothers, mother daughter, husband wife, in laws, father daughter, mother son even grandparents. These different dynamic relationships are so special to us and universal as well. Some see a reflection of themselves, some see how to correct issues they are facing, some get inspired.

When you are given dramas like ‘Talkhiyan’ which are adaptations of earlier works, do you go through the original work to have a

profound understanding of the character? Was ‘Talkhiyan’ a burden, considering that you had to perform a character from a critically acclaimed novel?

I most certainly do go back and read over the original work. ‘Talkhiyan’ was not a burden at all. Bee Gul the writer of ‘Talkhiyan’ did a superb job of maintaining the essence of the God of Small Things in her adaptation. We all had so much to work with from both pieces of writing. Khalid Ahmed with his theatre background and a phenomenal cast made the whole experience very special and real. It was a beautiful book and an even more beautifully portrayed TV play, we brought it to life for people watch.

‘Daam,’ ‘Mata-e-Jaan’ and ‘Dobara Phir Se’: which has been your personal favourite work with Mehreen Jabbar? How do you find her as a director through the ample work you have done with her?

‘Daam’ was my first TV project and my first with Mehreen Jabbar. ‘Daam’ was also written by Umera Ahmed and touched upon social issues that needed to be talked about. Particularly on so called class differences. For me that was my favourite project from the three. It was all so new and exciting and I was already seeing the power of storytelling through TV especially when working with Mehreen and the way she skips the gloss and goes straight for the raw, real nuances.

What advice would you give to an 18 year old Sanam Saeed?

I’d give myself a pat on the back first for having my head and heart in the right place always. But I’d also tell my 18 year old self to not worry about changing others or fixing others, look inwards and take a step back. Slow down you’re not running out of time either.

A national hero! I’m honoured. Thank you. But I don’t think I’ve done enough for my country yet. There are so many people I look up to as our national heroes like our sportsmen and women, poets, activists, artists and philanthropists. Asma Jahangir, Imran Khan, Jahangir Khan, Abdul Sattar Edhi, Bushra Ansari and then so many young national heroes today like Sana Mir, Hajra Khan, Samina Baig and Ayesha Farooq just to name a few!

Sanam Saeed has not just tasted success in television serials and theatre, but has also ruled the box office with some of the biggest blockbuster hits of the country. These drama serials and films range from a variety of genres encompassing romance, social issues, suspense and comedy.