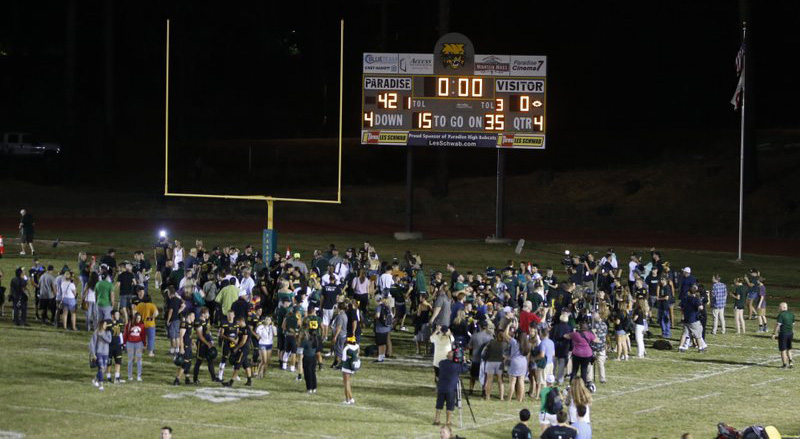 It’s hard to recognize Paradise. It is heaps of melted metal. It is scorched pine trees. It is a place where things used to be, before a fire destroyed nearly 19,000 structures and killed 86 people last November.

But on Friday night, Paradise looked like home again. Thousands of people filled the stands at Om Wraith Field at Paradise High School – which was spared from the flames – to watch the depleted football team play its first game since losing everything.

Girls wore ribbons in their hair and glitter on their faces. Boys wore jerseys with the sleeves rolled up. People stood in line to order hot dogs at the concession stand, only to be given a paper plate with a bun and told to walk around the corner and pick one off the grill.

“I recognize this,” 43-year-old Shannon Stoneman said as she looked around faces she had not seen in nearly 10 months.

Stoneman lost her home, her grocery store, her gas station, her favorite restaurant, and everything else she knew in the fire. She had to move more than 130 miles (210 kilometers) away, putting her two teenage daughters into another school. But when she heard about the Paradise High School football team playing again, she took the day off from work and came back to watch. “Our hearts are here, even if our homes aren’t,” she said. Senior running back Lukas Hartley could feel the pressure.