Kuala Lumpur has become a destination in its own right

* Everyone heads for Petaling Street at night 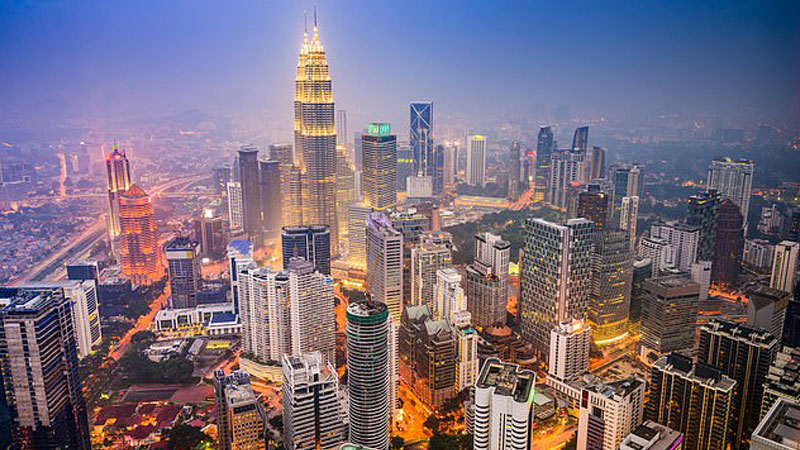 Drinking a Lady O cocktail in a speakeasy in Kuala Lumpur’s Chinatown is like a scene from sci-fi film Blade Runner.

You enter the cocktail bar, PS150, through a tiny fake vintage toy shop on Petaling Street and follow the stairs down to the ‘Opium Den’ with its intimate booths.

Everyone heads for Petaling Street at night. Lanterns are lit, streets are closed to traffic and the market opens for business.

Later at Cho Cha Foodstore, we try bowls of steamed barley and rice, topped with pan-seared duck breast, fried chicken with cinkalok and crispy dried shrimp. Food is wonderful in Kuala Lumpur, with its fusion of Malay, Chinese and Indian flavours.

KL (as the locals call it) is ideal for long- haulers looking for an intriguing stopover, but there’s so much more.

Two hundred years ago, it was a small tin-mining town at the confluence of the Klang and Gombak rivers. Now it’s the capital of Malaysia, a financial centre with real estate to rival Tokyo and Bangkok.

It has temples and mosques jostling with state-of-the-art skyscrapers by Norman Foster and Jean Nouvel. The twin Petronas Towers, designed by Cesar Pelli in 1996, are a symbol of KL’s new-found wealth.

Shopping is a national pastime. KL has 66 malls. You can browse Chanel and Gucci at the Suria KLCC, at the base of the Petronas Towers, but for more adventurous types, I’d recommend Central Market near Chinatown, an Art Deco building filled with local arts and crafts.

Later at Cho Cha Foodstore, we try bowls of steamed barley and rice, topped with pan-seared duck breast, fried chicken with cinkalok and crispy dried shrimp. Food is wonderful in Kuala Lumpur, with its fusion of Malay, Chinese and Indian flavours

New hotels are springing up everywhere, from budget to five-star. We stayed at the gloriously elegant RuMa hotel on Jalan Kia Peng, in the heart of the Golden Triangle (the city’s shopping and entertainment hub), with views over the Towers.

RuMa’s decor reflects the city’s mining history – all copper and gold accents. You enter via the ‘birdcage’ (a rotunda with a water fountain and piped birdsong), then glide into the Grand Salon with its double-spiral staircase and mannequin in golden kebaya (traditional Malaysian dress).

There’s a celebrity chef – Tyson Gee (who cooked for the Duchess of Cambridge in his home country of Canada) is obsessed by colour and texture, using fresh local ingredients from the markets. Breakfast is a smorgasbord of healthy treats: porridge, chia seeds, matcha powder, sweet coconut; plus the full English and Malay dishes – if you fancy wonton noodle soup at 9am.

Later we gorged on laksa johor (spaghetti with white sardine meat) and spicy river lobster ramen at restaurant Open House, next to the Petronas Towers. The name comes from the Malaysian tradition of opening one’s house to all, regardless of race or religion, during festive seasons.

Different ethnic and religious groups live peaceably in Malaysia (the population is 80 per cent Muslim, with Buddhists, Hindus and Christians). It’s a constitutional monarchy where nine royal families take turns to rule for five years each.

We peered through the gates of the Royal Palace, fascinated by the story of Sultan Muhammad V of Kelantan who abdicated recently to marry – and then divorce – a Russian beauty queen.

Kuala Lumpur means ‘muddy estuary’. Chinese miners mined tin up the Selangor River in the 1840s, about ten miles north of present-day Kuala Lumpur, which was cut out of dense rainforest. Malaysians are proud of their heritage. At the Royal Selangor Visitor Centre, you can uncover the secrets of pewtersmithing. We even got to hammer our own pewter tray to take away.

But the country has a painful history. During World War II, the British-ruled country was captured by the Japanese Army. Not only British and Australian PoWs suffered abuse and starvation – most notoriously on the Burma Railway – but also thousands of Malays and Chinese. The Japanese surrendered to the Allies on August 15, 1945 after the atomic bombings of Hiroshima and Nagasaki. In 1957, Malaya – as it then was – was granted independence. The Union Flag was lowered for the last time in Merdeka Square, with its mock-Tudor cricket pavilion and pitch, to mark the end of British rule.

On our last day we visited the Batu Caves in Selangor. Every year during the festival of Thaipusam, crowds flock to the limestone caves. We climbed the 272 rainbow steps, wheezing in the heat, along with 1,200 others to gaze at the huge gold statue of Hindu deity Lord Murugan.

Then we treated ourselves to lunch at a neighbourhood restaurant – spicy curry with rice served on banana leaves. Amazing food, architecture and live theatre – that’s KL. But just remember to pack a few elasticated waistbands.