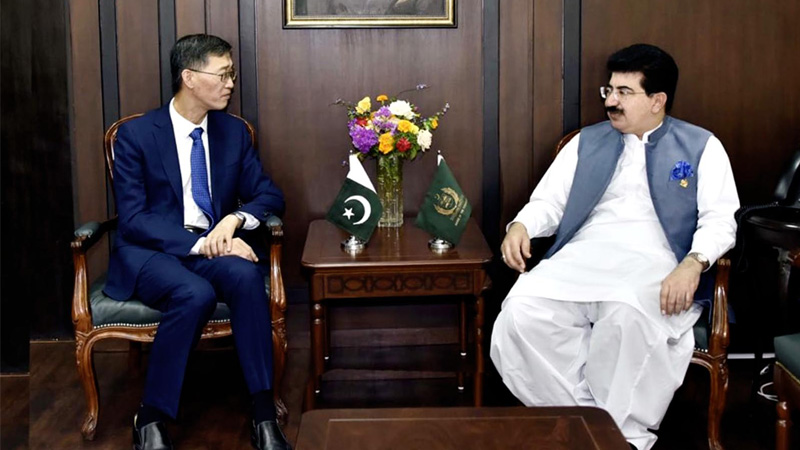 Chinese Ambassador Yao Jing on Friday reiterated commitment of his government to the strategic relationship with Pakistan and hoped that appointment of Federal Minister for Economic Affairs would further strengthen relationship between the two countries.

He said this during meeting with Federal Minster for Economic Affairs Muhammad Hammad Azhar.

The ambassador updated the minister on the progress made on account of implementation of CPEC related projects.

The ambassador stated that priority in the second phase is on socioeconomic sector projects, with grant financing for direct benefit of common man.

To promote B2B relationship for technological and industrial development in order to augment Pakistan’s capacity to export was also a priority area for the Chinese government. Establishment of Special Economic Zones remained an important milestone.

Minister Muhammad Hammad Azhar stated that the CPEC is a flagship programme of Belt and Road initiative which is now entering into a new phase. The Minister reiterated commitment of his government for implementation of next phase of CPEC for the benefit of people of Pakistan.

The federal minister acknowledged the historic relationship with China and the generous support it has been extending to Pakistan. The minster also acknowledged the economic and financial assistance provided by China to Pakistan during difficult times. China’s position on the current situation in occupied Kashmir was vehemently appreciated.

The vision of the government is now on building institutions, improving governance, bringing accountability and transparency and spending tax payer’s money for the greater welfare of common man.

Both sides reiterated the mutual resolve to strengthen the bilateral relationship between the two sides.

Separately, Senate Chairman Muhammad Sadiq Sanjrani on Friday said Pakistan and China shared identical stance on Kashmir issue and India would not be allowed to establish its hegemony in the region.

He said that the recent developments and especially the Modi regime’s decision to scrap article 370 and perpetuating Indian aggression in Indian Occupied Kashmir have been widely condemned by global community. Exchanging views with Chinese Ambassador Yao Jing here at Parliament House, Chairman Senate observed that Pakistan and China enjoy a time tested friendship based on trust and mutual respect for each other. “Both the countries have supported each other’s stance and the increasing cooperation based on strong economic partnership would place Asia on high pedestal of economic growth and prosperity in the World.

The Senate chairman said that CPEC would open new windows on opportunities with bright future and the government decision to establish CPEC authority would further expedite the development process. Sanjrani underscored the need for enhanced parliamentary linkages and people to people contacts to further deepen economic collaboration and bilateral friendship.

The Chinese ambassador agreed with the views of Senate Chief and termed friendship between Pakistan and China a unique and Chine condemns Indian aggression in IOK. He said that the global community should play its role to bring a halt to the Indian atrocities in IOK and protect their rights.