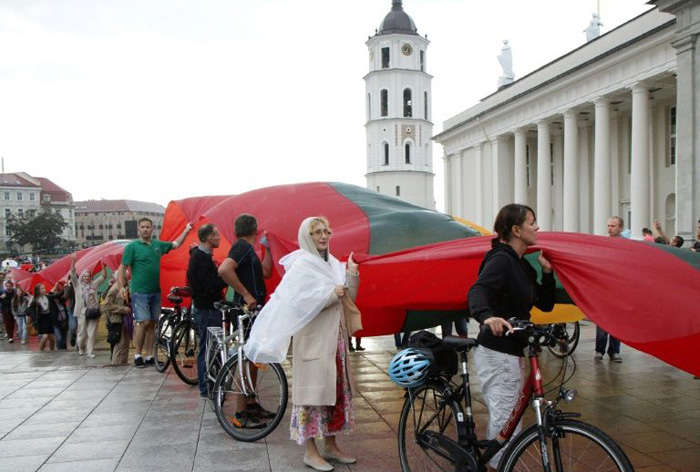 From Catalan separatists to Hong Kong pro-democracy activists, the human chain that helped the Baltic states win independence from the Soviet Union three decades ago still inspires freedom-seekers the world over.

“The Baltic Way was an inspirational event to many freedom fighters around the world. It demonstrates the power of solidarity and non-violent social movements,” leading Hong Kong democracy activist Joshua Wong told AFP.

Eastern European members Estonia, Latvia and Lithuania will hold events Friday to mark 30 years since the Baltic Way — one of the largest anti-Soviet demonstrations — when more than one million people linked hands to form a human chain spanning over 600 kilometres (370 miles).

At the same time, activists 8,000 kilometres away are planning a pro-democracy “Hong Kong Way” demonstration as their latest creative show of resistance to the city’s Beijing-backed government. More than one million Taiwanese formed a human chain in 2004 to protest at China’s deployment of missiles against the island while hundreds of thousands of Catalans linked hands in the Spanish region to demand their own country in 2013.

In August 1989, the Baltic Way had sent the strongest signal to date that the Soviet-occupied trio was firmly on the road towards restored independence, which they all finally won two years later.

Linking capitals Riga, Tallinn and Vilnius, the August 23 demonstration marked the 50th anniversary of the infamous Nazi-Soviet pact that carved up eastern Europe and led to the Baltic states’s annexation by the Soviet Union.

Thousands of people are expected to take part in Friday’s commemorative concerts, exhibitions, poetry contests, runs and car rallies across the Baltic region, with most events including some form of symbolic chain.

The Lithuanian public broadcaster will set up a giant installation made of nearly 1,500 old radios to highlight the role broadcasting played in coordinating the rally.

Lithuanian President Gitanas Nauseda, who himself attended the protest near the Latvian border 30 years ago, said the Baltic Way “has become a unique event that today inspires other nations”.

“The key wish — an independent, free and successful Lithuania — was achieved. We are members of NATO, the EU and the international community. It proves the Baltic Way’s huge impact on both us and the world,” he told AFP.

Estonian President Kersti Kaljulaid called the Baltic Way “one of the most noteworthy peaceful appeals for freedom in the history of the world”.

Her Latvian counterpart, Egils Levits, said it “was a political innovation back in the day, something no one had tried before”.

Latvian Culture Minister Nauris Puntulis, who is also an opera tenor and former rock singer, said the demonstration was “a very personal, emotional watershed moment for many of us”. “For the first time, people could believe that their voices and participation actually did count, and we could make a difference.”

Other nations seeking independence have followed the Baltic example, but with limited results.

In September 2013, Catalan residents formed a 400-kilometre human chain across their region in northeastern Spain to demand a referendum on independence, but to no avail: Madrid never approved it.

More than 1.6 million people took part in “The Catalan Way,” according to local authorities.

In October 2017, independence leaders staged a referendum despite a court ban and subsequently proclaimed a republic, prompting a crackdown by Madrid. Now, 12 independence leaders are awaiting their sentence in a trial over their role in the secession bid, risking seven to 25 years in jail. Nine of the individuals are in jail. Spain’s Supreme Court is expected to announce a ruling this autumn.

The planned 40-kilometre Hong Kong protest is not the first human chain to irk China.

In February 2004, more than one million people in self-governing Taiwan linked hands to protest against Chinese military threats. “Those nations seeking more freedom keep trying to use the Baltic example of 1989,” Lithuanian historian Algimantas Kasparavicius said.