California freeway crossing to give wildlife room to roam 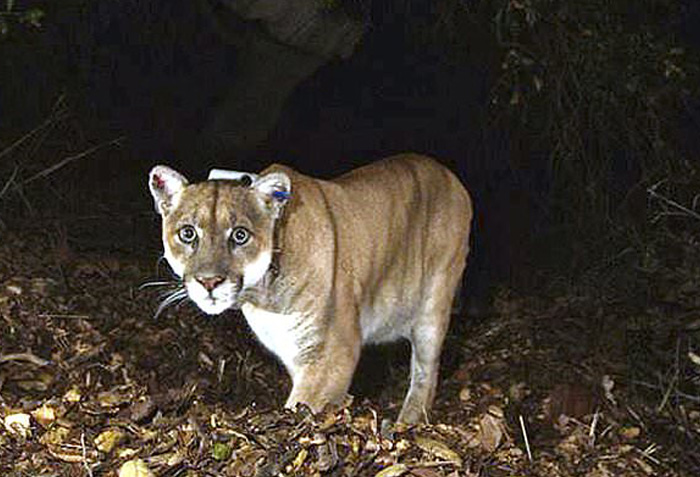 Like many urban singles, the mountain lion P-22 lives a solitary life in a too-small habitat. And he has a hard time finding a mate in the big city.

Famous for traveling across two freeways and making a huge Los Angeles park his home, the lonesome big cat has become a symbol of the shrinking genetic diversity of wild animals that must remain all but trapped by sprawling development or risk becoming roadkill.

Hoping to fend off the extinction of mountain lions and other species that require room to roam, transportation officials and conservationists will build a mostly privately funded wildlife crossing over a major Southern California highway. It will give big cats, coyotes, deer, lizards, snakes and other creatures a safe route to open space and better access to food and potential mates.

The span along US 101 will only be the second animal overpass in a state where tunnels are more common. Officials say it will be the first of its kind near a major metropolis and the largest in the world, stretching 200 feet (61 meters) above 10 lanes of busy highway and a feeder road just 35 miles (56 kilometers) northwest of downtown LA.

“When the freeway went in, it cut off an ecosystem. We’re just now seeing impacts of that,” Beth Pratt of the National Wildlife Federation told The Associated Press.

Scientists tracking mountain lions fitted with GPS collars found that roadways are largely trapping animals in the Santa Monica Mountains, which run along the Malibu coast and across the middle of Los Angeles to Griffith Park, where P-22 settled.

“They can’t get out of here to get dates, and cats can’t get in to get dates. … For those of us in LA, having a romance prospect quashed by traffic is something we can all relate to,” Pratt said.

The result of that isolation, researchers say, is imminent genetic collapse for mountain lions. Habitat loss has driven the populations to inbreeding that could lead to extinction within 15 years unless the big cats regularly connect with other populations to increase their diversity, according to a study published this year by the University of California, Los Angeles; University of California, Davis; and the National Park Service.

The $87 million bridge last month entered its final design phase. It’s on track for groundbreaking within two years and completion by 2023, according to engineer Sheik Moinuddin, project manager with the California Department of Transportation. Construction will take place mostly at night and won’t require any lengthy shutdowns of the 101 freeway, officials said.

Moinuddin said Caltrans considers it a “special” project that the agency hopes will inspire others like it across the state.

One of the reasons it’s special is that 80% of the money to build it will come from private sources, Pratt said. She’s in charge of fundraising and is using P-22 – “the Brad Pitt of the cougar world” – as the poster cat for the campaign.

“He is world famous, handsome, everybody loves him,” she said about the cougar that’s been photographed in his park home with the Hollywood sign as a backdrop.

Despite being the face of the project, P-22 is unlikely to use the bridge because he’s confined to the park many miles away. But many of his relatives could benefit, Pratt said.

More than $13.5 million in private funding has already been raised, Pratt said. Officials are considering offering naming rights to the bridge if an entity or individual – perhaps a Hollywood studio or star – ponies up a significant donation, she said.

Some 300,000 cars a day travel that stretch of the 101 in Agoura Hills, a small city surrounded by a patchwork of protected wildland that the new crossing will connect. Residents regularly spot tarantulas, coyotes and bobcats in their yards and enjoy a short walk to hiking and biking trails that offer sweeping views of the Pacific Ocean.

Drivers on the busy freeway in the Liberty Canyon area might do a double-take as they speed under a bridge 165 feet (50 meters) wide with brush and trees growing on top, seamlessly joining hillsides on both sides of the lanes.

“And who knows, you might see an animal peeking over as it’s crossing,” Pratt said.

From the perspective of that animal meandering to or from the Santa Monica Mountains, the topography will hopefully be indistinguishable from the scenery on either side, said architect Clark Stevens. His design will total about 8 acres of landscape – of which the bridge top occupies about an acre.

He’s working with biologists and engineers to design berms and hollows with high edges that will block sound and light from the lanes below.

“Ideally the animals will never know they’re on a bridge,” said Stevens, with the Resource Conservation District of the Santa Monica Mountains. “It’s landscape flowing over a freeway. It’s putting back a piece of the ecosystem that was lost.”

Wildlife crossings – bridges and tunnels – are common in western Europe and Canada. A famous one in Banff National Park in Alberta spans the Trans-Canada Highway and is frequently used by bears, moose and elk. The first one in California opened with little fanfare last October near Temecula, about 60 miles (97 kilometers) north of San Diego.

The Los Angeles-area bridge has enjoyed nearly universal support, unusual for a public works project. The draft environmental impact document received nearly 9,000 comments – with only 15 opposed, according to the NWF.

Agoura Hills resident Fran Pavley, a retired state senator, said one of her neighbors was initially concerned about cost.

“He came on board after learning it would be funded privately,” she said.

Stevens said he’s encouraged by Caltrans’ devotion to the project and its promise to consider more like it.

“Every hole in the freeway ought to be exploited. It’s a game of odds,” he said. “The more options animals have, the better off they’ll be.”