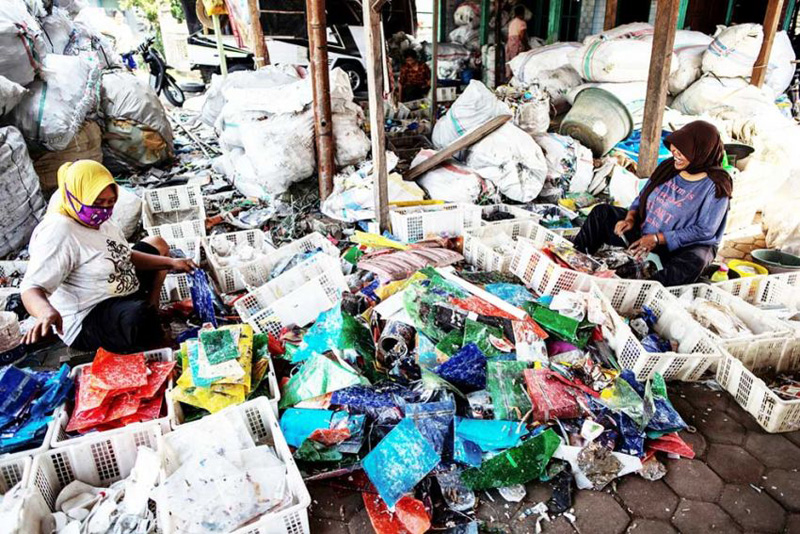 His weathered face breaks out in a big grin as Keman explains how sifting through rubbish paid for his children’s education, one of many in his Indonesian hometown basking in a waste-picking boom.

Governments around the world are grappling with how to tackle the scourge of single-use plastic, but for the people of Bangun trash equals cash.

Around two-thirds of the town’s residents eke out a living sorting and selling discarded plastic bottles, wrappers and cups back to local companies, and after China blocked imports of foreign garbage early this year — the pile is growing.

“I have three kids — all of them go to university,” Keman, who goes by one name, proudly tells AFP as he stands in a field of ankle-deep trash.

“And all that was possible thanks to my hard work scavenging rubbish,” the 52-year-old explains.

Bangun is among several poor communities in Java, Indonesia’s most populous island, that have carved a living from mining waste, much of it from Western nations including the United States, England, and Belgium, as well as the Middle East.

Once a giant in global recycling, China’s decision to block international waste through the industry into chaos.

Huge quantities of rubbish were instead redirected to Southeast Asia.

Indonesia’s plastic waste imports have soared in the past few years, jumping from 10,000 tons per month in late 2017 to 35,000 tons per month by late last year, according to Greenpeace, which warns that plastics prosperity comes at a huge environmental and public health cost.

Up to 40 dump trucks a day rumble into Bangun to unload garbage outside people’s homes or in vast fields where it forms mountains of waste sometimes as high as rooftops.

For years, a handful of local paper mills have been supplying the village with garbage, which is often mixed with legally imported paper scraps, according to environmental activists.

Residents search through the refuse with their bare hands, rakes and shovels — often with little more protection than cheap cloth masks.

Sitting on her haunches surrounded by mounds of trash, local mother Pumisna reached her filthy hands into a pile of refuse and began sorting through the bits of aluminium, plastic bottles and cups before her.

Trash may earn her a few dollars a day, but sometimes there is another kind of prize hiding inside the rubbish: crumpled foreign currency such as dollar bills, euros and pound sterling.