Shop assistant spared prison despite splashing out £100,000 from her family-run cocaine racket 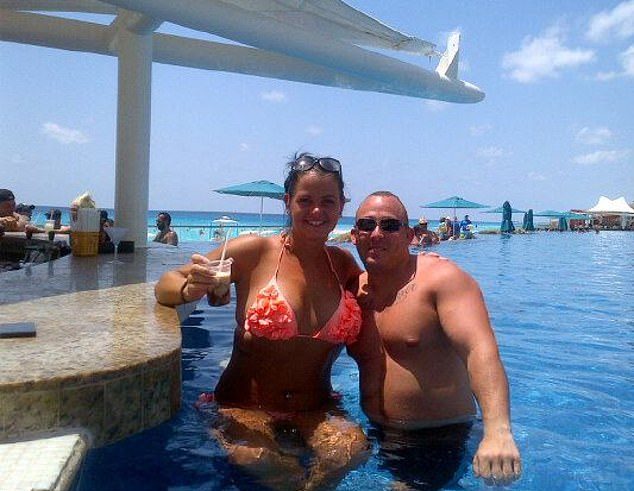 A shop worker who used £100,000 from her family’s cocaine racket to fund holidays abroad, sports cars and home improvements has been spared jail.

But she was caught out after she flaunted photos of trips with her husband Thomas to Cancun, Sharm El Sheikh, Gran Canaria, Majorca and Bulgaria.

The couple, from Clayton in Manchester, benefited from ‘extreme profit’ off the back of drug deals, laundering money so they could sustain their lavish ‘high life’.

The pair, both 33, were caught spending tens of thousands of pounds over a four-year period on properties, BMWs, Audis and Mercedes cars and luxury trips.

Thomas purported to make money as a personal trainer, but was pictured during his holidays ‘carrying a bit of weight’, jurors heard.

They also allegedly recruited members of their family to help deal with the dirty money.

They now face a Proceeds of Crime hearing which will determine how much money they will have to pay back.

In December 2013 the couple travelled in ‘premium seats’ to Mexico for a 10-day family holiday with their children, staying at the five-star Hard Rock Hotel.

During the holiday, which cost £10,000 and was paid for in cash, the family were also said to have chartered a motorboat.

Over the course of 2012 to 2016 Colleen paid cash deposits on BMWs, Audis and Mercedes, using monthly instalments to continue to pay them until upgrading to a better model.

When police attended their home in 2015, the couple had a BMW and a high powered Mercedes worth £60,000 on their drive with the matching number plates.

Using finance agreements, Thomas bought a black 6.3 litre Mercedes AMG for £42,000, while his wife purchased a black BMW X5, also with a personalised number plate, which was bought for £16,500.

Prosecutor Henry Blackshaw told the court: ‘This couple are a big fish in a medium pond living well off the back of criminality. They are charged with being involved in criminal property, using the cash and being able to spend it in legitimate ways.

‘Together the family connections contributed to the way that Thomas and Colleen were living. They benefited from extreme profit off the back of illegal drug dealing. Thomas Campbell and his wife participated in living the high life.

‘They were spending very extravagantly on holidays, on cars on house renovations which did not fit in with their legitimate income of a few thousand pounds.’

The couple were also photographed with Kieran O’Brien who was found in possession of between £600,000 and £1.3 million of cocaine and convicted of money laundering of £28,000 in 2015.

Colleen’s mother Theresa Bowden, 59, and Thomas’ mother Lynn Campbell, 60, were also accused of laundering the money to help their children fund the lifestyle but charges against both were dropped.

Both Lynn and Theresa often joined them on the trips, paying in cash at travel agents across Manchester.

The jury heard Colleen and Thomas had family members who had been convicted of possession with intent to supply cocaine.

Lynn Campbell was accused of providing rent money for a premises that was used as a ‘cocaine stash house’ while Theresa Bowden mortgaged the home that she had been living with for ten years, and used the money and cash supposedly given to her by the couple to purchase the house across the road.

She also signed off on planning permission for a £60,000 two-storey extension to her home which Thomas and Colleen moved into on completion. The property extension added room to the dining and kitchen area, and an extra bedroom on the second floor.

They spent over £50,000 on the extension and renovating the property, including installing flat screen TV’s, a gym area in the garden, a personal bar, TV bed and mosaic floors.

Thomas was also found to be in the possession of a ‘Probe 700 FX’ which is used to detect if the homeowner is being monitored.

Mr Blackshaw told jurors: ‘He was getting suspicious that big brother was watching him at that time and it wasn’t welcome, and his business TC fitness comes into fruition in September 2014.

‘We say this is a façade to create a legitimate business. If you look at the photos of him on holiday wouldn’t seem the case that he was working out at that point in his life, he is carrying a bit of weight.’