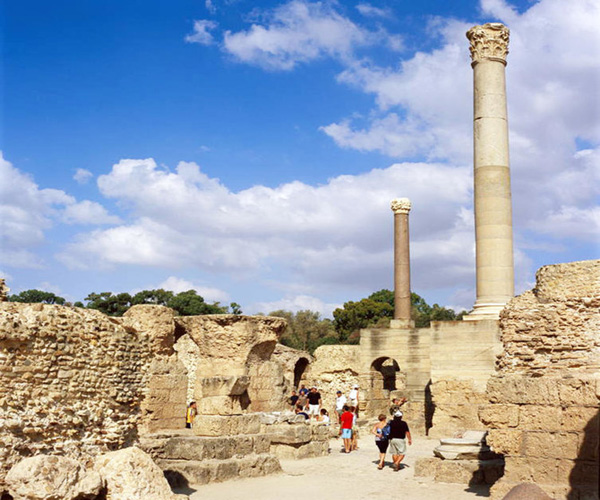 Saber Sessi was working the night shift at a municipality vehicle depot in Carthage, Tunisia, when he signed off on five bulldozers in the early hours of July 9.

Unbeknownst to him, the intended target for those bulldozers was his home.

“I opened the gate, I handed (the keys) over and then I saw them drive around to my house,” said Sessi, 50, who lived beside the depot in the working-class neighborhood of Mohamed Ali, in the northern surburbs of the Tunisian capital.

Sessi’s house and nine other buildings were razed to the ground that night in a government operation to clear illegal homes from the area that used to be a battleground for gladiators in the Roman Empire — the Circus of Carthage.

Today, two-thirds of Carthage — about 430 square km (165 square miles) — is archaeological land, according to Hayet Bayoudh, the municipality’s mayor.

The area earned a spot on the UNESCO World Heritage List in 1979. Now Carthage’s place on that list is under threat, due to what the UN’s cultural body calls “uncontrolled urban sprawl.”

All building projects and repair works within the boundaries of Carthage must first be approved by the municipality and the National Heritage Institute (INP), Bayoudh explained.

But over the years, a number of homes and buildings have gone up without permission.

“We need to clear and clean two zones, the Punic Port (in the area’s south) and the Roman Circus — the two black points for UNESCO,” Bayoudh told the Thomson Reuters Foundation.

“These demolitions are an urgent measure.”

Today, the only obvious trace of ancient grandeur on the site of the Circus is the inspiration for the name of a popular cafe on Mohamed Ali’s main high street: Amphitheater.

But the cafe and the cluster of homes behind it sit on land that archaeologists consider to be of immense historical value.

UNESCO first expressed concern about the conservation of Carthage in 2012, prompting a “monitoring mission,” explained Mustapha Khanoussi, a consultant with the INP.

So far, 90 demolitions have been carried out in the area since 2013, with another 30 planned by February 2020, according to mayor Bayoudh.

UNESCO procedures say all sites risk being removed from the World Heritage list if they are not sufficiently protected.

However, “it is extremely rare that a site loses its status. It has only happened twice,” said Laetitia Kaci, a spokeswoman for the organization.

Today, two-thirds of Carthage is archaeological land, according to the municipality’s mayor

According to UNESCO’s website, it deleted Oman’s Arabian Oryx Sanctuary from the list in 2007, after the country decided to pursue hydrocarbon exploration on the site.

Tunisia has been given until February 2020 to take action on UNESCO’s recommendations.

The cluster of houses on the Circus is mainly made up of half-built structures lining un-tarmacked roads, but there are also street lights, running water and authorized electricity connections.

Hayet and Nacer Gerbi, a couple in their 60s, bought a plot of land on the Circus in 2016.

Two months after they built their house and finalized the deed for their property, Hayet Gerbi said they were informed by the authorities that their land was to be confiscated as heritage.

“The municipality had installed electricity here, we have running water,” she noted, showing an INP-stamped document granting the previous owner permission to install electricity in 2010.

The Gerbis and others in the neighborhood are battling court cases over their homes, but “permission to install electricity doesn’t mean permission to build,” noted Achour, the INP conservationist.

As for Sessi and his wife, they are now renting a studio in Mohamed Ali.

Residents and civil society activists see the demolitions in the Mohamed Ali neighborhood as discrimination.

“The demolitions only happen in this zone, where the poor are,” said Hechmi Mohamed Salah, a 59-year-old Mohamed Ali resident.

Bayoudh, the mayor, denied that the clearing operation focuses only on poorer areas. “We target the sites, not the people — unfortunately the Roman Circus is in a poor neighborhood,” she said.

The status of land in Carthage has been in flux over the past few decades.

Before the country’s revolution in 2011, some parts of the area were declassified to benefit those close to former dictator Zine El-Abidine Ben Ali so they could sell the land and build luxury properties, explained Khanoussi of the INP.

After Ben Ali’s ousting, many of these sites were reclassified; some building projects were halted, while others continued illegally.

Most of the building on the Circus site — which was never declassified under Ben Ali — took place after 2011, in the chaotic period following the revolution, said Moez Achour, a Carthage conservationist with the INP.

“We are now paying the price for the actions (of previous administrations),” he added.

Illegal constructions were allowed in order to “appease people,” Achour said of the houses on the Circus.

Permission was also obtained through corruption and nepotism, he added, using the example of the upmarket Phoenix restaurant, which was built on top of the Roman Cisterns of La Malga after the site was listed.

The families of some Mohamed Ali residents used to live on those cisterns, a collection of more than 20 huge stone containers forming one of the biggest water reservoirs in the antique world, until the government moved them in the 1960s.

They were told to move “for archaeological reasons,” said Achour, and offered new houses in Mohamed Ali. Out of more than 90 households, only 3 remain on the cisterns site.

These original houses in the Mohamed Ali neighborhood are legal, Achour explained.