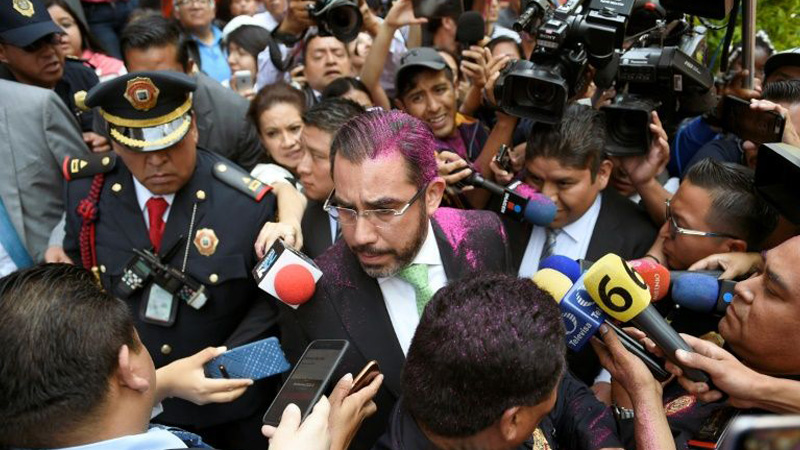 Shouting “Justice!”, around 250 people, mostly women, took to the streets to protest the lack of punishment in the two cases, the latest to trigger outrage over the high rate of violence against women and girls in Mexico.

The capital’s security minister, Jesus Orta, appealed for calm as the march turned rowdy, greeting the protesters in person and telling them, “These cases have not been closed… We’re on your side.”

Protesters, however, responded by covering him in pink glitter and spray-painting a group of policemen standing guard.

They also displayed a pig’s head outside the local prosecutor’s office. Masked demonstrators later hurled rocks at the building, shattering the glass entrance.

The protests were sparked by two recent cases: that of a 17-year-old girl who says four policemen raped her in their patrol car as she left a party on the capital’s north side, and that of a 16-year-old girl who says a policeman raped her at the national photography archive museum, in the city center. No officers have been detained or punished so far in the first case. A policeman was arrested Thursday in the second.

Mayor Claudia Sheinbaum — the first woman elected to the post — said she sympathized with the protesters, but condemned their actions.

“There need to be investigations (in the two cases)… But this was not a protest, it was a provocation. They wanted the government to respond with violence. But we’re not going to do that,” she told a news conference.