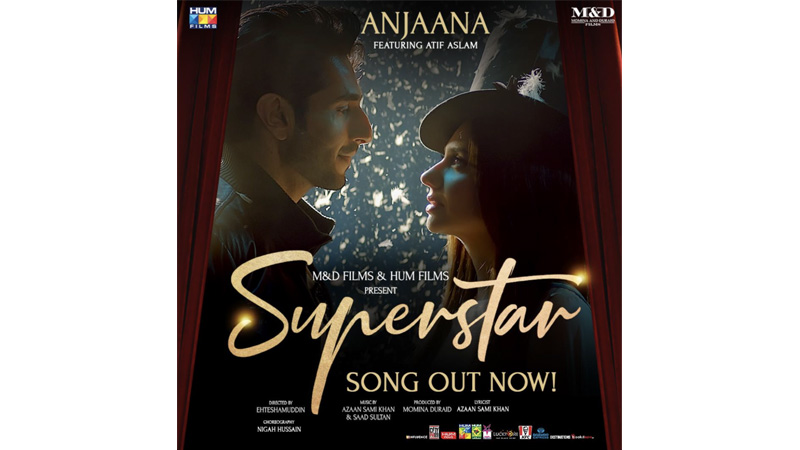 Social media is already abuzz with the star-studded premiere of ‘Superstar’ and positive reviews have already started pouring in from film critics and the audiences from the Gulf Cooperation Council, where the film has already been released.

By now we have witnessed superstar in all its glory ranging from the romantic ballad “Bekaraan”, the intense chemistry building through “In Dinon”, to the fiery Noori, the emotional Ghalat Fehmi, the bombastic Dharak Bharak and the jazzy Doston.

Just when we thought we have seen it all, the makers of ‘Superstar’ have finally released the track that everyone has been waiting for, “Anjaana”, sung by the none other than the melodious Atif Aslam. Like they say, always save the best for last, “Anjaana” takes the romance factor between the lead pair to a whole new level. Atif Aslam has hit perfection with the latest release from ‘Superstar’ which blossoms and thrives on the romantic ideology of the star couple. The premise takes us in to the world of the lead pair. How they connect, grow, and how the attraction manifests in a glorious form of love. Anjaana exudes love and romance this tune is sure to stay with all the lovebirds for times to come.

Sung by Aslam, the romantic melody is written by the very talented Azaan Sami Khan who is also the screenplay writer of the film and has composed the film’s music alongside Saad Sultan.

Produced under the banner of Momina & Duraid films, ‘Superstar’ is directed by ace director Ehteshamuddin of ‘Udaari’ and ‘Sadqay Tumhare’ fame and the dialogues are written by Ali and Mustafa Afridi. The film’s screenplay and music are by the talented Azaan Sami Khan, who previously wowed everyone with his music talent in Parwaaz Hai Junoon. Apart from the lead pair, Superstar boasts a stellar cast including the industry’s bigwigs Nadeem Baig, Jawed Sheikh, Marina Khan, Asma Abbas, Saife Hassan, Alizay Shah, Ali Kazmi and Waqar, and special appearances from the likes of Hania Amir, Saira Shehroz, Osman Khalid Butt, Kubra Khan and Mani. The film will be released on Eid-ul-Azha, 2019 under the banner of HUM Films.