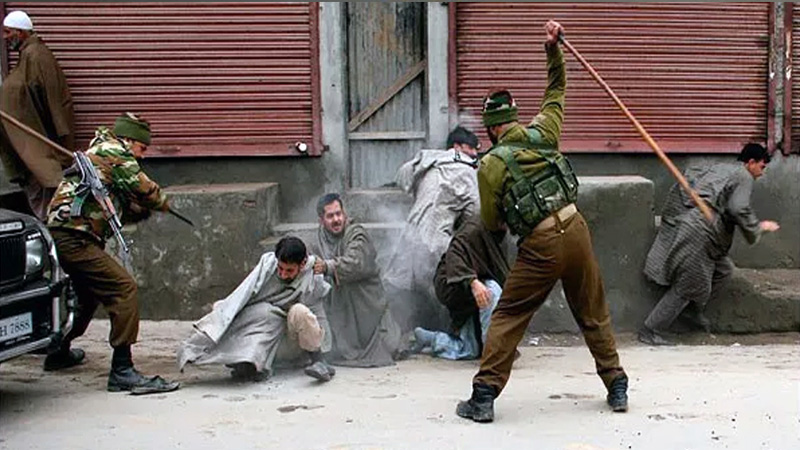 As a complete security lockdown in occupied Kashmir entered its fourth day on Thursday, reports emerged that hundreds of poor migrant workers have begun fleeing the Himalayan region to return to their far-away villages in northern and eastern India.

Migrant workers in occupied Kashmir complained on Wednesday that their Kashmiri employers didn’t pay them any salary as security forces began imposing tight travel restrictions over the weekend and asked them to leave their jobs.

On Wednesday, workers crowded the railroad station at Jammu, the winter capital of the state, as they waited for trains bound for Uttar Pradesh, Bihar and Jharkhand. They carried their belongings on their heads and under their arms, tied in bedsheets.

One worker, Jagdish Mathur, said many people walked for miles on a highway and hitched rides on army trucks and buses from Srinagar to Jammu, a distance of 160 miles.

“We haven’t eaten properly for the past four days,” said Mathur, adding that he doesn’t have money to buy a rail ticket to take him to his village in eastern Bihar state.

“The government should help me.”

Surjit Singh, a carpenter, told the New Delhi television channel that he was returning home because of occupied Kashmir’s security lockdown.

Every year, tens of thousands of people travel to occupied Kashmir from various Indian states looking for work, mainly masonry, carpentry and agriculture. Whenever the security situation deteriorates, they return homes.

Meanwhile, India’s surprise move to carve out sparsely populated Ladakh from occupied Kashmir to make it a territory directly controlled by New Delhi has been met with protests in Kargil, a Muslim-majority border city in Ladakh that identifies culturally with Kashmir, suggesting that the Hindu nationalist-led government’s plan to redraw the country’s political map will be far from easy.

While some Ladakhi lawmakers from Leh, the main city in the heavily Buddhist region with historic ties to Tibet, hailed the move as a long-overdue response to their requests for separation from the region, organisations in Kargil condemned the decision.

After Kashmir’s special status was scrapped, Kargil’s religious and political organisations met to discuss the changes, releasing a statement condemning the Indian government for acting “without the consent from the people”.

The groups called for a district-wide shutdown on Tuesday as a “token of public resentment against the unjustful decision taken by the union government”.

Schools and shops were shuttered, and streets were empty except for a group of demonstrators who marched while shouting slogans decrying the separation of Ladakh.

The Imam Khomeini Memorial Trust, Kargil, an influential religious group in the region, supported the protest. The chairman of the trust, Sheikh Sadiq Rajai, told The Associated Press on Wednesday that the new law amounts to an attack.

“It’s an attack on our identity. This decision will disempower our people,” he said.

Former Kargil lawmaker Asgar Ali Karbali also condemned the Indian government’s move to divide the region, referring to it as “a black day in the history of India”. Karbali said he doesn’t accept the decision, and that others in Kashmir also won’t.

“It was the people of Leh that were demanding that Ladakh be freed from the Kashmir region over a long time, not us. Kargil is against the division of Jammu and Kashmir on the basis of religion, language and region. The move is undemocratic,” Karbali said.

Kargil, nestled among sharp hillsides and rough terrain, is where India and Pakistan fought a war in 1999. The town once served as an important trade and transit centre in the Pan-Asian trade network.

The people of Kargil have opposed Ladakh’s decades-long demand to be severed from Kashmir. The friction between the two districts has occasionally sparked clashes between the two communities.

Despite Kargil’s opposition, Ladakh’s elected representative to the Indian parliament described the mood in the region as celebratory.

Tsering Namgyal drew thumping applause in the lower house on Tuesday when he said that Ladakhis long to be an inseparable part of India.

In a tweet, Prime Minister Narendra Modi complimented Namgyal, saying he had “coherently presented aspirations of our sisters and brothers from Ladakh”. Ladakhi Buddhists have often claimed that the region’s policies were Kashmir-centric and discriminated against them.

The Gyalwang Drukpa, the spiritual head of the Ladakh-based Drukpa Order of Buddhism, wrote to Modi to express gratitude.

Still, residents of Kargil on Wednesday said they felt more affinity with Kashmir than Leh, and worried that the decision could lead to a flood of people from outside the region damaging their pristine landscape.

“Our jobs are in danger. Now people from India will come here and settle. Our jobs will go to them. We were never consulted before India took this decision,” Ghulam Mustafa said.

India’s ruling Bharatiya Janata Party (BJP) stripped Kashmiris of the special autonomy they had for seven decades through a rushed presidential order on Monday.

By repealing Article 370 of the constitution, people from the rest of India will now have the right to acquire property in occupied Kashmir and settle there permanently.

Home Minister Amit Shah also moved a bill to bifurcate the state into two union territories — Jammu Kashmir as one and Himalayan Ladakh region as the other — directly ruled by New Delhi.

Ahead of the move, communications were cut off and thousands of troops were also deployed amid fears of a violent reaction. Following the government’s decision, Mehbooba Mufti and Omar Abdullah, former chief ministers of Indian-occupied Kashmir, along with two other prominent political leaders were also arrested.