* To supplement Independence Day celebrations, the Daily Times will highlight, all of August, the individuals who continue to make Pakistan proud. Our sixth interview is with veteran actress, writer and educationist Navid Shahzad 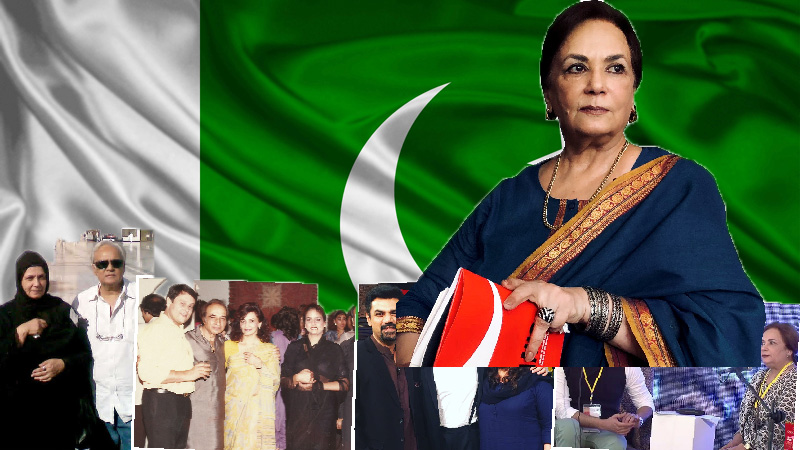 I was brought up in a household that was frequented by people like Imtiaz Ali Taj and his wonderful wife Hijab who wrote great short stories, the quintessential Ashfaq Ahmed and the superb writer Bano Qudsia. Abdur Rahman Chugtai was not only my father Justice SA Rahman’s friend; he also tutored me for some time. Very few people know that my father is one of the four Founding Members of the Alhamra Arts Council where Roshan Ara Begum sang live in the gardens as did the magical Farida Khanum. Noor Jehan was a frequent, welcome and charming dinner guest. Theatre was the stamping ground of Khayyam Sarhadi, his wife Attiya, Kamal Ahmed Rizvi and Dr Enver Sajjad; Naeem Tahir and Yasmin became role models for articulation on radio and stage; Shoaib and Salima mesmerised with their charm and talent while the likes of Moeen Najmi, Muhammed Idrees and Salman Pirzada had girls swooning in the stalls! And then came TV – with the charismatic Aslam Azhar! College was spent in the company of Abdul Qayyum, Basit Haqqani, Khaled Ahmed and a young Najam Sethi and an even younger Naeem Bokhari. So it is easy to understand why drama, art, literature and music were such a powerful presence in my life. As for acting, I cannot remember when it was not a passion.

Do you think it was tougher for women to make their mark in the film industry during the time you started out? What were some of the challenges that you personally came across and how did you overcome them?

It was infinitely more difficult. When I was growing up, acting in films was a complete taboo for girls like me. I had to wait until I got married to do television and theatre was limited to school or college annual productions. I think it was just perseverance and a little bit of luck in the shape of Shoaib Hashmi who came and took permission from my mother-in-law for a TV series. ‘Such Gup’ was such a success that there was no looking back after that. My troubles however, did not end with the two year series because getting permission for every subsequent assignment was a struggle. It was only the support of my husband Shahzad Humayun Syed that allowed me to pursue my dreams.

In your eyes, how has the industry evolved over the years?

Well, filmmaking used to be an industry with a large number of people engaged in it. From studio to distributors to cinema owners, it was a vibrant thriving community with Lahore at the centre. Since my maternal family were cinema owners, I began to understand the ‘business’ of film making and distribution from people like the Nadkarnis, the Agha GA Gull family, the Thanvis and of course the mercurial WZ Ahmed. Mohammad Ali, Zeba, Waheed Murad, Sabiha and Santosh, his brother Darpan were frequent guests for tea in Murree’s Sam’s restaurant while Saturday night live music often featured my dashing uncles who played the drums. I guess that is where my son Farhad Humayun gets his rhythm from while his voice is a gift from his father! As long as films were produced, written and directed by a generation of film makers who had opted for Pakistan in 1947, the industry thrived – despite state negligence and deliberate oversight. Its demise came when ‘new’ money poured into productions from dubious sources and the state clamped down on the art form. That Pakistan produced films in the regional and national language which dealt with issues such as widowhood, ethics and morality which were lent a certain authenticity through sterling performances, excellent storytelling and brilliant musical scores is something to be proud of. Unfortunately, the seventies saw unprecedented changes in the political, social and cultural life of the people which affected the prevailing art and culture scene negatively. It is only in the last decade or so that a fresh batch of filmmakers has begun to confront the ghosts of the past. It may not be a revival yet but Pakistani cinema is certainly showing promise of becoming a major player in the near future.

The only rule I have lived by is the pursuit of excellence, be it work or in my personal life

What have been some of the rules you’ve sworn by for survival and for success in the industry?

The only rule I have lived by is the pursuit of excellence – be it work or in my personal life.

Do you feel people’s perception in Pakistan have changed over the years towards how they look at actresses in terms of it being an honourable field or not?

Yes and no. The good news is that films are no longer exclusive territory for a certain class of people. Young, educated and talented people are finding their place in the sun but at the same time, a residual social stigma lingers on. I often find people making sweeping judgements about the women who work in films as though you have to be a horse of a different colour to work on films but in large measure, it depends on how strong women themselves are. Noor Jehan is a prime example of having dictated her own rules in a shark infested world dominated by men who treated women disparagingly.

I have just finished my first book which has taken me two years to research and write. It is called Aslan’s Roar and is a study of Turkish TV and the rise of the Muslim hero. Printed by Sang-e-Meel Publishers, the book is available in major bookstores in Lahore, Islamabad, Karachi and other cities. I juggle time between my full time career as academic advisor for Lahore Grammar School, acting and writing. I am in the midst of writing a TV series at the moment.

Share a memorable moment of your career with us.

Too many to count!

You know I believe that age is just a number and I am only just getting started so who knows what tomorrow holds!

Are you supportive of Pakistani actors and artists trying their luck in Bollywood?

Why just Bollywood? I support any and every effort to work anywhere in the world. There is nothing holding us back except ourselves.

I could write a whole book on what it means to be a Pakistani to me. Suffice it to say that I am very proud of the country I belong to.

The exacting standards I set for myself.

Thank you, I am truly humbled. My personal heroes are the women and men who live their lives with dignity struggling through each day without compromising on principles.

MASTER OF ALL TRADES

Navid Shahzad is not just an acclaimed actress but is also an avid writer. Her recently-launched book is a study about Turkish television. She is also working in the capacity of academic advisor at the prestigious Lahore Grammar School. She is currently writing a TV series as well.

Navid Shahzad has never backed down in the face of adversity or succumbed to challenges. She has given her heart and soul to her career and says that her focus has always been on how to excel.