The story of Abdul Aziz

Abdul Aziz was a brilliant student of commerce at Haroon Bahria College, Naval colony. He was regular student- a bibliophile who loved Mirza Ghalib’s poetry and made his companions listen to Mirza’s hard pieces of poetry with accurate interpretation. All his teachers liked him due to his well mannered behavior. His father was a businessman in Dubai, and although he was the second in his family, his father liked him the most in the family. Aziz lived a happy life until a sudden change came about, when he joined a company of bad friends living around him. He was honest, and soft-hearted and never thought his life would be ruined by joining the company of junkies.

He never knew about his ahead life how it was going to change. There was a house near his home which looked old but had much pleasure inside it according to Aziz.

All the grieved who fought with their ill-fate and had lost every hope in contemporary times were present in that old house but had interesting stories from their past to share. Once Aziz visited the place, he felt good being around these hopeless people.

It looked like an old house, a ruined place but was the home of cocaine, opium and every pleasure was available to make man could feel joyful. Aziz got himself feeling good among all those lovely but aggrieved people who had interesting and painful stories behind the curse of using intoxication. Some of them were  great artists, intellectuals business professionals but their being addicted to drugs shattered all their whims of a relieved life. They used drugs but were honest, never told lies nor hurt anyone with their words and hands according to Aziz. Albeit, the relation of love among them stuck as an unfolding bound which could never be broken by mistakes if raised by misconceptions.

We all had gotten cursed by our families, friends and society, nobody liked us, even a drug seller would treat us like we are the weakest, wickedest and the worst creatures on this planet.

For the lust of cocaine, we even fought with our loving mothers to snatch money from them to fulfill the need of cocaine for the day but after that we would use that snatched money to buy cocaine every time.

Everyone was aware of our marginalized condition, but some people still snatched the money we collected for cocaine and opium including policemen who were involved in looting us. Life looked like hell every day as we were dying then.

We were regular drugs users, local police and authorities knew about us as drug addicts. Even some policemen used cocaine with us, for them buying drugs was a matter of shame so we used to buy cocaine and opium for them when they needed.

The drug supply and running including hideouts were illegal in Hub Chowki, but were numerous in quantity. Despite all rigid laws, Cocaine became a common drug and it could easily be purchased but when crystal was installed, the demand of cocaine began to shrink. Although crystal meth is more dangerous than cocaine, it was penetrated in the place of cocaine. Police and local forces used to perform their duties to cocaine hideouts but where crystal was sold, there were no forces to stymie them. 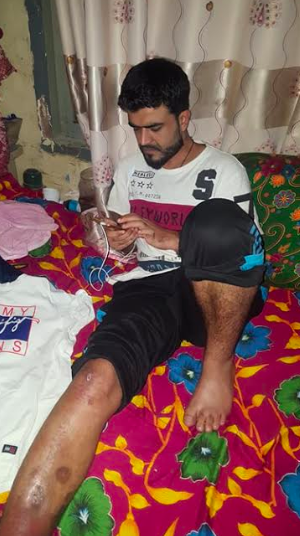 Behind the curse of using cocaine was rejection from family and society. People are not as real as they look apparently. In our society, the level of acceptance is equal to naught, we are in a hurry to loot one another, and nobody seems ready to listen the grievances of people. We drugs users rather consider ourselves better than people who in well dressed and appearance eat human flesh by corrupting the society. This was said by Aziz.