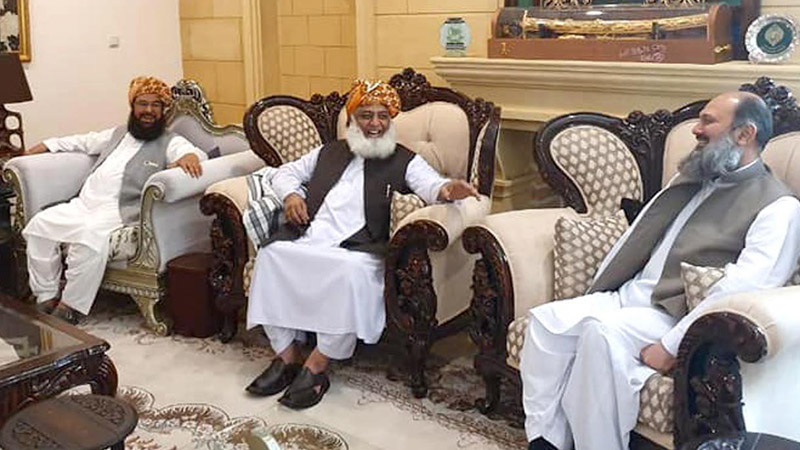 According to the report, Balochistan Chief Minister Jam Kamal will stay in Islamabad in order to lead the efforts to make the no-confidence motion unsuccessful and will woo the opposition leaders into sparing Sanjrani.

On Wednesday, a delegation comprising members of the ruling PTI and its allies called on Jamiat Ulema-e-Islam-Fazl (JUI-F) chief Maulana Fazlur Rehman at his residence in an attempt to convince the opposition to withdraw the no-confidence motion. Kamal and Leader of the House in Senate Shibli Faraz along with Senators Ayub Afridi and Mirza Muhammad Khan Afridi travelled to JUI-F leader’s residence to exchange thoughts on the no-confidence motion.

Post-meeting, Fazl-ur-Rehman told media that the arrival of Faraz and Kamal at his residence was an honour but not enough as they did not bring any proposals. “The decision to move a no-confidence motion against the Senate chairman was taken at the all-parties conference. I welcome their [the delegation’s] arrival but their recommendations are beneficial,” he said. “There should be recommendations on which consultations can be held with other opposition parties,” he added.

At this moment, however, Leader of the House Shibli Faraz responded by advising to make efforts to ensure the Senate’s dignity is not impacted. “The JUI-F leader’s party has representation in Balochistan and we presented to him our thoughts,” he said, urging to protect the Senate’s dignity and pushing for all parties to play their part. “We have walked up to Maulana sahib to bring an end to this situation and protect the sanctity of the Senate,” he said, adding that the PTI and its allies are ready for the vote in the Senate.

The Balochistan chief minister said his delegation has put forth the government’s request and wishes for a step to uphold the Senate’s dignity. “It feels like the consequences of the opposition’s move may not be very good after all,” he said, noting that they should collectively make a decision to move towards improvement and engage in efforts to take things forward in a better way.

Kamal said he has met Fazl because though moving a no-confidence motion against the Senate chairman is a constitutional right, he fears it will set an undesirable precedent. “We want to take steps for the betterment of the situation,” he said. “The chairman of the Senate is elected after every three years. If this takes places [the de-seating of Sanjrani], it’s going to start happening after every three to four months,” he feared.

Kamal said Sanjrani ran the House in a commendable manner and things will operate in a good manner in the future as well. “We, too, will have to rescind our requisition pertaining to the [Senate’s] deputy chairperson,” he said. “However, if the opposition goes ahead with its move, then the government will have to retort by doing the same,” he said. “The future of politics should not be affected over a few differences,” he said, adding that he expects the JUI-F chief to change his mind and also convince other opposition parties to reconsider as well.