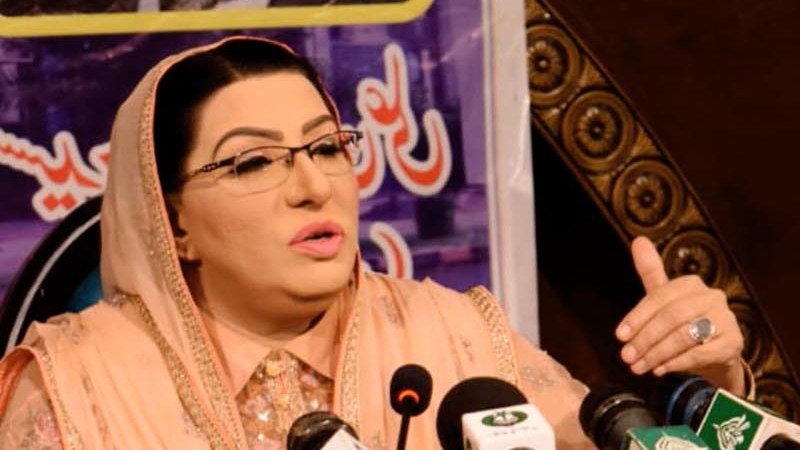 Special Assistant to Prime Minister on Information and Broadcasting Dr Firdous Ashiq Awan on Sunday said that Prime Minister Imran Khan’s visit to the United States (US) would help promote the soft image of the country.

Speaking at a press conference, she said the prime minister’s address to a gathering of the overseas Pakistanis would present Pakistan as an enlightened, moderate and progressive country in the world.

She said the visit would boost relations between Pakistan and the US, adding that the premier would sensitise the international community about the sacrifices rendered by Pakistan to bring peace and stability to the region.

Firdous said the prime minister would urge the overseas Pakistanis to come forward and play their role in economic stability of the country through investing in their homeland.

She said the premier had set an example of simplicity by traveling to the US through a commercial flight, adding everyone should follow the example set by Imran Khan. She said the past rulers had wasted national wealth on unnecessary and luxurious foreign visits. She appreciated the print and electronic media of Pakistan for giving effective coverage to the PM’s visit, saying that it was a national cause and media was playing a positive and responsible role in this regard.

Firdous said democracy and democratic process had won as a result of peaceful, free, fair, impartial and transparent elections in merged tribal districts of Khyber Pakhtunkhwa. She said successful holding of elections in terrorism-affected regions was a victory of peace and democracy.

She said the PTI government in Khyber Pakhtunkhwa provided a level playing field to all the political parties in the merged tribal districts and hoped that the new elected representatives of tribal districts would play a vital role in development process of their areas.

She said the people of the tribal areas had rejected both Pakistan Muslim League-N (PML-N) and the Pakistan People’s Party (PPP) and their policies. She said the tribal areas’ people were loyal and patriotic Pakistanis, who had defeated terrorism, militancy, insurgency and poverty by offering sacrifices.

She said establishment of durable peace in tribal areas was top priority of the government. The government had successfully brought these people to the mainstream political system and process by holding elections there, she added. “Now the era of development and prosperity will soon begin in these tribal areas as well,” she mentioned.

Firdous said Pakistan was committed to weeding out terrorism, militancy and insurgency from the country, while continuing its front-line role in establishing global peace.

She said the whole of Pakistani nation stood united against terrorism and was ready to sacrifice even their lives while fighting shoulder to shoulder with their armed forces against terrorism. She said the government was ensuring complete freedom to media as it firmly believed in the right of freedom of expression and speech.

Firdous said the opposition’s no-confidence move against Senate Chairman Sadiq Sanjrani would fail and they would face a big defeat in the Senate on this matter.

She said the government was committed to ensuring the rule of law and justice in Pakistan, besides strengthening the national institutions for national development, prosperity and political and economic stability.

She also strongly criticised Maryam Nawaz and said she had a PhD degree in telling lies and deceiving the nation.

She said Maryam should not distort the historical facts as army chiefs had been visiting foreign countries with the prime ministers of Pakistan in the past too.

She asked Maryam if those three prime ministers were also selected.

She said the politically mature people of Pakistan had strongly rejected the immature politics of both the PML-N and the PPP. “Now, they were crying to get sympathies of people in a bid to just cover up their massive corruption,” she added.