* CM takes notice of protest, tells DIG South to release all those detained 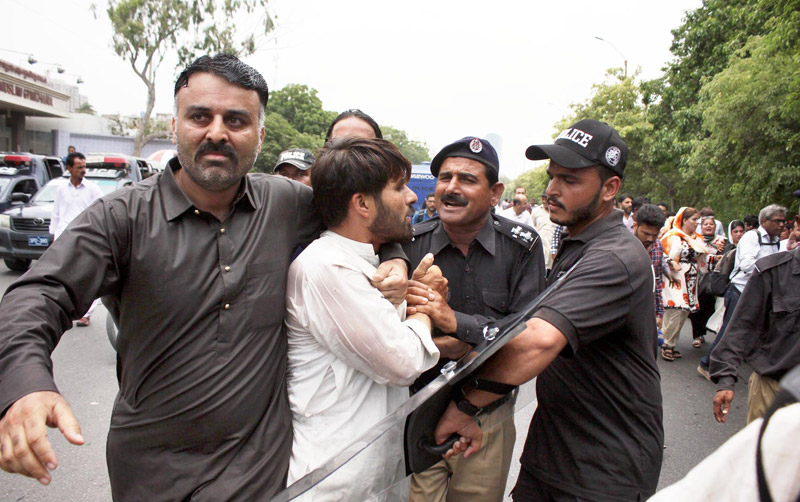 Protesters from the Sindh Nurses Alliance clashed with police in the city on Thursday.

Protesters were trying to reach the CM House from the Press Club when they were met with water cannons and baton charging by police.

As a result of the clash, traffic from Shaheen Complex was diverted to M R Kiyanai and Sultanabad.

Nurses under the banner of Sindh Nurses Alliance are protesting all over the province for an increase in salaries, promotions and hike in nursing student stipend for over two weeks.

Chaos had ensued outside the Chief Minister House earlier when police resorted to the use of water cannons to disperse protesters who had gathered to demand an increase in wages for nursing staff and restoration of service structure. At least 25 people were arrested.

The protesting nurses said that the government was not serious in holding negotiations with them. They warned that the protest will not be called off until their demands were accepted.

The chief minister said that there was “no reason to protest” after negotiations between SNA and health secretary. He said that “it was regrettable that a political party wanted to politicise the issues”.

Qayyum Marwat welcomed federal government step to develop nursing education and training on modern lines in the country through introducing Generic Nursing Education Program but he demanded to the President of Pakistan, Prime Minister, Federal Minister for Health and provisional health ministers to continue Diploma in Nursing (03 years Diploma Program), as well.