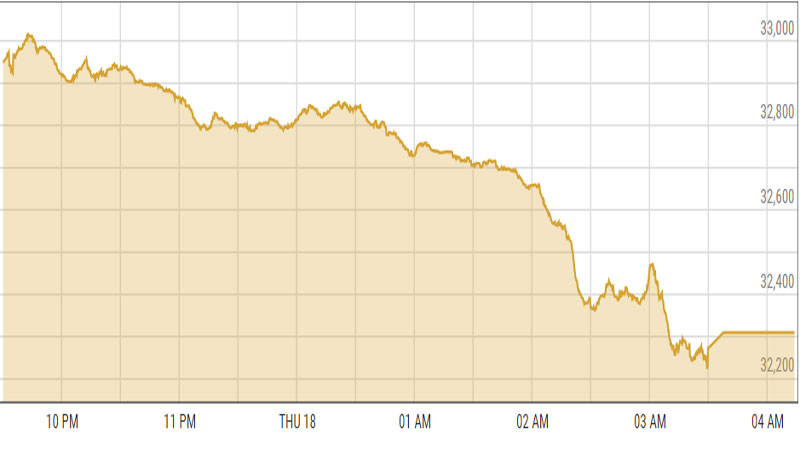 After posting gains in the past two trading sessions, bears returned to the stock market and pushed it down by 672 points on Thursday because of worries about expected hike in power tariff.

After a brief open in the positive zone, the KSE 100 Index fell victim to selling pressure as investors offloaded stocks due to economic and political uncertainty. The market fell steadily till midday; however, following the arrest of Abbasi, the bourse dived and extended losses.

Uncertainty at the bourse caused all index-heavy sectors to close with a loss.

Ahsan Mehanti of Arif Habib Corp stated that positive data on the current account deficit, which contracted 32% in FY19, and renewed hopes of a positive outcome of Prime Minister Imran Khan’s visit to the US next week invited midsession support.

In its report, Arif Habib Limited stated that the market stayed positive for a brief period and went up 32 points, but after that, selling pressure emerged, causing a slide of 758 points. It ended the session with a decline of 672 points.

Selling was recorded across the board, which initially started with significant volumes in Habib Bank Limited (HBL) stock.

The banking sector led the volumes table with 15.7 million shares followed by the technology sector (11 million) and cement companies (10 million).

Stock-wise activity showed that TRG Pakistan was on top with trading in 8.5 million shares, followed by K-Electric (7.3 million) and HBL (4.6 million).

A major fall in stock prices was seen in oil marketing companies, which saw trading at or near their lower circuits.

Aba Ali Habib Securities said in its report that stocks tanked 672 points as post-monetary tightening sell-off returned to the bourse.

“The benchmark index fell 2% over renewed worries about anticipated hike in power tariff,” it said. “Investor sentiments were dampened due to mounting political risks after NAB arrested a key opposition leader over corruption charges.”

Negative cues from both political and economic fronts contributed to lower volumes and the benchmark index closed at 32,309.54 points.

Overall, trading volumes decreased to 87.4 million shares compared with Wednesday’s tally of 111.6 million. The value of shares traded during the day was Rs3.76 billion.

Shares of 320 companies were traded. At the end of the day, 29 stocks closed higher, 275 declined and 16 remained unchanged.

Foreign institutional investors were net buyers of Rs 424.14 million worth of shares during the trading session, according to data compiled by the National Clearing Company of Pakistan.