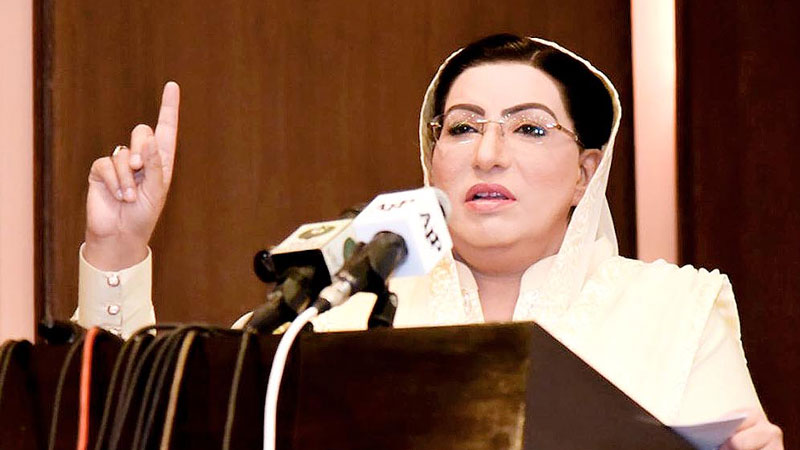 She was addressing a seminar on the 62nd death anniversary of Sir Sultan Muhammad Shah Aga Khan III in Islamabad.

She said Sir Sultan Muhammad Shah Aga Khan III had arranged finances to procure Gwadar Port, which indicates his vision as the port offers greater regional connectivity and has the potential to become economic hub of the area.

Dr Firdous Ashiq Awan said the youth should learn from the struggle of national heroes. She said a leader always focuses on long term policies, securing future of the coming generations, and keeps national interest supreme.

Special Assistant to Prime Minister on Information and Broadcasting Dr. Firdous Ashiq Awan says current challenges being faced by Pakistan are due to attempts of previous rulers to undermine national institutions for their personal interests.

Talking to media in Islamabad this afternoon, she said the government of PTI has been making sincere efforts for rebuilding the damaged institutions.

She said we are taking forward the institutional reforms agenda of the government. She said parliament is a very important pillar of state.

Dr Firdous Ashiq Awan said some political pundits want to run the senate according to their wishes. She said the no confidence motion move by the opposition parties against Chairman Senate has raised serious questions in the minds of ordinary people about the designs of these parties. She said government will protect the national institutions from onslaught of opposition.

Referring to upcoming visit of Prime Minister Imran Khan to the US, she said this will help strengthen the bilateral relations between the two countries. She said it is first time that peace loving efforts of Pakistan have been recognized by the US. Dr. Firdous Ashiq Awan said the international standing of the country has improved due to its visionary leadership and foreign policy. She said the visit will also improve the standing of Pakistan’s passport in the world.